General Electric is offering new details on the three independent companies that will be formed following the multinational conglomerate's historic split.

In early 2023, the company will execute a tax-free spinoff of its healthcare business to form GE HealthCare. Following the spinoff, GE HealthCare will list on the Nasdaq under the stock ticker "GEHC." According to the company, GE HealthCare will "continue to be at the forefront of provider and patient care with more than four million product installations and over two billion patient exams a year."

Meanwhile, the company's portfolio of energy businesses — GE Renewable Energy, GE Power, GE Digital, and GE Energy Financial Services — will be spun off in early 2024 under the name GE Vernova.

"The new name is a combination of ‘ver,’ derived from ‘verde’ and ‘verdant’ to signal the greens and blues of the Earth, and ‘nova,’ from the Latin ‘novus,’ or ‘new,’ reflecting a new and innovative era of lower carbon energy that GE Vernova will help deliver," GE said.

GE Vernova will have an installed base of more than 7,000 gas turbines and 400 gigawatts of renewable energy equipment.

Following the spinoffs, GE will become an aviation-focused company called GE Aerospace, which will own the company's trademark and provide long-term licenses to the other companies. GE's aviation business encompasses 39,400 commercial and 26,200 military aircraft engines. 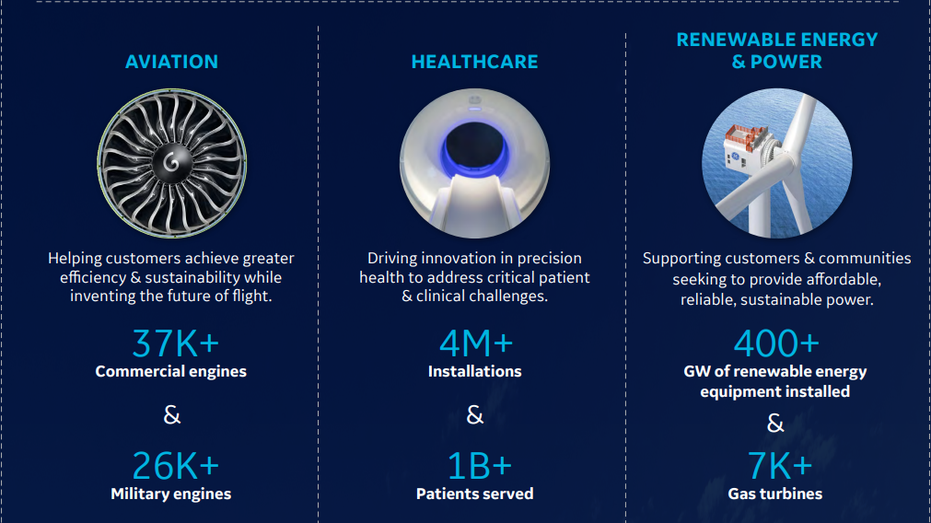 GE will spin off its healthcare business in early 2023 and portfolio of energy businesses in early 2024 before turning into the aviation-focused GE Aerospace. (GE)

"Leveraging GE’s multi billion-dollar global brand gives us a competitive advantage in our end markets, allowing these businesses to win in the future," chair and CEO Larry Culp said in a statement. "Built on a foundation of lean and innovation, these brands will continue our mission of building a world that works and provide our customers with an important reminder of the strengths they value in GE."

GE first announced the split in November 2021. At the time, the company said it expected to incur one-time separation, transition, and operational costs of approximately $2 billion related to the split.

As of the time of publication, GE shares had fallen more than 33% year to date.