KPMG staff are demanding compensation for pay cuts they claim were rushed through under the shield of the coronavirus pandemic as rival firm Deloitte reversed salary reductions a month early after recording higher-than-expected profits.

Both of the big four accounting firms introduced 20 per cent pay cuts for staff in April in an attempt to safeguard profits in the expectation work would dry up as the economy tanked. However, the revenue hit has not been as severe as expected and staff want to be compensated for lost wages that were not matched by reduced hours. 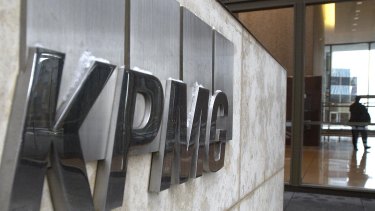 KPMG’s staff want to be compensated for pay cuts. Credit:Bloomberg

KPMG staff are now back on full-pay but last month they were able to submit anonymous questions at an online company-wide meeting and many requested compensation.

"I am struggling to understand how it is fair to not pay all staff back the full amount of lost pay while committing to paying some staff bonuses," one employee said, according to leaked screenshots obtained by The Age and The Sydney Morning Herald.

"Is it accurate to say that KPMG has prioritised repaying employees' wage reductions before paying partners' distributions when KPMG made a net profit in FY20 which has not been repaid to employees?" said another.

"Why are we not receiving a 100 per cent reimbursement for foregone earnings if revenues have increased by 7 per cent," one more said.

KPMG reported in August its annual revenue had increased by 7 per cent over the year to more than $1.9 billion, as the firm saw growth in all areas of the business including its auditing, tax, enterprise and management consulting divisions.

The firm's chief executive Gay Wingrove announced 1 per cent of the expected 6.7 per cent annualised pay cut would be reimbursed in June but staff want further compensation. Further compensation would be determined by the impact of the pandemic, a spokesman said.

"We were pleased we are in a position to repay some of the salary reduction and get our people back to 100 per cent salaries, despite the outlook still being highly challenging and uncertain," a KPMG spokesman said. "While it is too early to make a decision on an additional remuneration payback, if circumstances permit any payback will be prioritised to our people in full first."

Two hundred KPMG workers were given less than two days before being made redundant in April. The firm has since advertised new roles across all levels – including senior consultants, analysts, researchers and managers.

"When the COVID-19 pandemic hit we took early action to protect jobs and provide continuity of service to clients," a KPMG spokesman said.

Deloitte originally planned to return staff to full pay at the start of October but brought this forward a month after revenue was higher than expected.

Senior analysts were told in mid-August there would be a freeze on promotions despite a healthy workload, due to legal sensitivities related to the redundancies, according to a source familiar with the meeting. Deloitte confirmed this meeting occurred but said there was no discussion related to pay rises.