Hundreds of workers at a Mondelez International bakery in Virginia are on strike, seeking to block the company’s demands for concessions in contract negotiations and end what the union calls the outsourcing of jobs to Mexico.

They are joining Bakery, Confectionery, Tobacco Workers and Grain Millers International Union workers striking since last week at a Mondelez bakery plant in Portland, Oregon, and at a sales distribution center in Aurora, Colorado.

HOW MUCH MORE WILL YOUR OREOS COST? COMPANIES TEST PRICE INCREASES

Mondelez, one of the world’s largest snack companies, and the union have been negotiating a new four-year contract since the old one expired at the end of May. The contract covers union employees at six Mondelez sites. The union membership has not voted on a contract.

The plant continued to make cookies and crackers despite the strike as salaried employees and plant leadership ensure that the company continues to supply customers, Mondelez spokesperson Laurie Guzzinati said.

But union representatives disputed that claim. The lines can’t run without the union members there, Local 358 President Keith Bragg said. 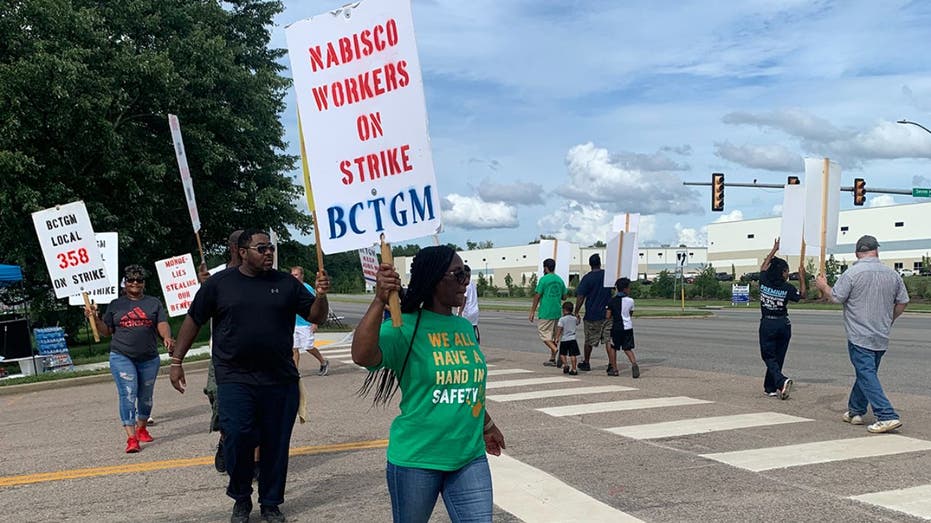 Hundreds of workers at a Mondelez International bakery in Virginia are on strike, seeking to block the company’s demands for concessions in contract negotiations and end what the union calls the outsourcing of jobs to Mexico. (BCTGM International)

The union claims contract proposals include a new alternative work schedule for employees and no premium pay for working weekends. The union also wants the company to stop moving jobs to Mexico.

Mondelez said the union is misinterpreting the proposed contract. The company wants to move a small number of workers to 12-hour workdays, working seven days over a two-week period, Guzzinati said.

The union also claims Mondelez wants the workers who pay nothing for health insurance benefits, to start paying for some premiums. The company said current workers would not see a change, but changes would be made for new employees.

The company said no U.S. jobs have been moved to Mexico as part of Mondelez closing two aging plants in New Jersey and Georgia in recent months.