Pandemic stock winners are in trouble

A version of this story first appeared in CNN Business’ Before the Bell newsletter. Not a subscriber? You can sign up right here. You can listen to an audio version of the newsletter by clicking the same link.

London (CNN Business)Shares of Netflix (NFLX) are imploding after the company reported its first quarterly loss of subscribers in more than a decade, far underperforming expectations and worrying investors that had been betting that a handful of big tech companies would continue to grow at a rapid clip.

What’s happening: Netflix’s stock is down 28% in premarket trading on Wednesday. If shares plunge that much when the market opens, more than $40 billion would be wiped off the value of the company.
Netflix said it shed 200,000 subscribers in the first three months of the year, when it had been expecting to add 2.5 million.

The streaming giant, whose stock had already dropped more than 40% year-to-date, blamed the attrition on increased competition for viewers and Russia’s invasion of Ukraine.

Netflix said its decision to pull out of Russia cost the company 700,000 subscribers. But the economy isn’t helping, either.

Inflation is forcing households to reevaluate their budgets. People in Great Britain canceled about 1.5 million streaming subscriptions in the first three months of 2022. More than a third did so to save money, according to a new report by media consultancy Kantar.
“Food and energy are people’s priorities right now, not watching ‘Stranger Things,'” CMC Markets chief market analyst Michael Hewson told me.

Netflix signaled it could make big changes to its business as it tries to stem the bleeding. It’s taking another look at how to address password sharing. CEO Reed Hastings also told analysts that the company will consider a lower-price subscription option with advertising.
“I’ve been against the complexity of advertising and a big fan of the simplicity of subscription,” Hastings said Tuesday. “But as much as I’m a fan of that, I’m a bigger fan of consumer choice.”
Big picture: Hewson said the stock plunge shows that Netflix was extremely overvalued, as investors — flush with cash during the pandemic recovery — fed a huge rally. Shares of Netflix rose 86% from the end of 2019 through 2021, while the S&P 500 climbed 48%.
“They were assuming people were going to be locked down forever,” Hewson said, adding that unlike Apple and Amazon, Netflix doesn’t have many alternative sources of revenue.
Clearly, the market mood has changed. The strong reaction could set the stage for another turbulent earnings season, with investors already on edge after disappointing results from the big banks.
When companies reported fourth quarter results earlier this year, Netflix and Facebook experienced huge stock losses as investors signaled growing sensitivity to downbeat predictions for the future. That was because the Federal Reserve was set to start raising interest rates, a move that would weigh on high-growth companies. Facebook’s disastrous results triggered the biggest loss in market value for an S&P 500 company on record.
Now, rates are officially on the rise, and there’s daily debate about whether the Fed could be even more aggressive than expected. The war in Ukraine is also dragging down sentiment. That could tee up big swings for top stocks as they disclose results.

Investors have been spending a lot of time following CEO Elon Musk’s ploy to buy Twitter. But come Wednesday evening, attention will turn back to a company he already controls. 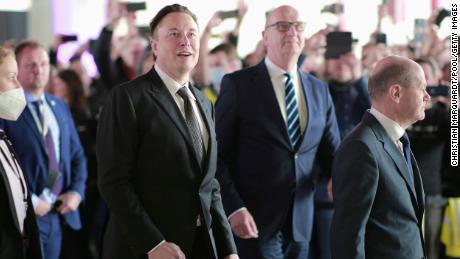 Tesla (TSLA) reports first quarter results after markets close. Analysts have strong expectations, my CNN Business colleague Chris Isidore reports.
The electric carmaker’s earnings are forecast to jump 142% from a year ago. Other traditional automakers, such as General Motors, Ford, Toyota and Volkswagen are all expected to report a drop in earnings due to supply chain problems and production issues.
Watch this space: Musk joined the call with analysts last quarter. Will he be on this time around?
If he isn’t, that could feed Wall Street’s worries that he’s too busy trying to take Twitter private to deal with his management responsibilities. If Musk does dial in, there could still be risks, given his tendency to speak off the cuff.
Another point of focus will be lockdowns in China, which have affected Tesla’s production in Shanghai. Credit Suisse analysts estimate that the recent shutdown there prevented the manufacture of 90,000 vehicles.
Shareholders will want to know if the plant can stay open given restrictions, and how suppliers of critical parts such as batteries are faring.
Investor insight: A lot is riding on Tesla’s performance. Disappointing results could further disrupt a stock market that’s already unsteady.

Prices at the pump have stopped falling from their recent highs — and some forecasters are warning of another uptick as the summer driving season looms and the war in Ukraine drags on, my CNN Business colleague Matt Egan reports.
After a slow-but-steady decline, the national average price for regular gasoline bottomed out at $4.07 a gallon last week, according to AAA. Since then the national average has increased five days in a row, climbing to $4.11 a gallon on Wednesday.
It’s the first increase in gas prices since early March, when turmoil in energy markets hit a crescendo following the invasion of Ukraine. And it dashes hopes that the national average would drop to $4 a gallon, taking pressure off inflation that’s running at the fastest pace in 40 years.
“It isn’t going down anymore,” said Andy Lipow, president of consulting firm Lipow Oil. “This is terrible news for inflation.”
Previously, Lipow had been forecasting a return to $4 gas. But he abandoned that call because of renewed concerns about Russia’s oil supplies and a pop in gasoline futures, a major driver of wholesale and retail prices.