One day, Australian lexicographers will catch on to a definition widely understood in investment circles: ‘Macquarie Speak’ – the art of issuing warnings about an organisation’s outlook before delivering a strong result, i.e. managing expectations.

It’s a language that the Reserve Bank’s Philip Lowe would have done well to learn, and one in which Treasurer Jim Chalmers needs to find fluency.

It’s time to work on their language skills for Treasurer Jim Chalmers and the RBA’s Philip Lowe.Credit:AAP

In the 1990s, Macquarie Bank’s then-chief executive Allan Moss was the trailblazer, his successor Nicholas Moore developed it into an art form and the bank’s current boss Shemara Wikramanayake has further honed the skill.

This time last year, as Wikramanayake released the results of Macquarie’s first quarter, she acknowledged the year had begun well, but in true ‘Macquarie Speak’ form went on to issue caution about the rest of the year and outline the company’s conservative stance.

Macquarie went on to deliver a profit jump of 56 per cent in the year to March 2022 – setting another record.

The Millionaires’ Factory is not the only organisation that regularly under-promises and over-delivers, but for consistency it has no peer.

‘Macquarie Speak’ lessons should be mandatory for all institutions with a broad stakeholder group. Philip Lowe should have become fluent in this language before he declared last year that interest rates wouldn’t rise from 0.1 per cent until 2024.

His comments ultimately translated to over-promising and under-delivering.

The RBA’s central task right now is to manage inflation expectations – to convince the community that inflation, which Lowe says will peak at 7 per cent late this year, is transient, not the new normal. While Lowe is probably closer to the pin on this forecast, given there are already signs that the supply-side bottlenecks and sky-high commodity prices that contributed to inflation are beginning to ease, he still has a credibility problem.

On Monday, the recently minted federal treasurer Jim Chalmers tried his hand on managing expectations of what is ahead for our economy, hosing down any remaining optimism during an address that forecast peak inflation at 7.75 per cent by year’s end and no real wages growth for 18 months, after which things will start to get better.

It was a decent attempt for his first outing – he is allowing for almost 2 years of above-target inflation, which will be a handy bit of insurance for him. 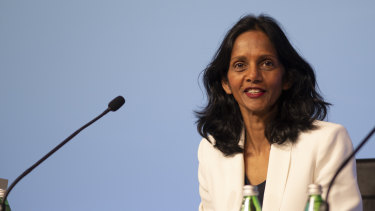 Macquarie Group chief executive Shemara Wikramanayake is fluent in the language of under-promising and over-delivering.Credit:Elke Meitzel

Chalmers’ economic statement to parliament on Thursday afternoon was delivered within hours of Wikramanayake delivering Macquarie’s latest quarterly earnings update – a better-than-expected improvement on the same quarter last year, in which she said all divisions were ahead but warned things were getting tougher.

When asked in her update about when the bank thought inflation would normalise, she launched into cautious ‘Macquarie Speak’ – calling it a “wait and see” situation and observing only that Australia is running a little behind other countries.

Not surprisingly, Wikramanayake was not about to make any forecast about Macquarie’s half-year results to September.

The big divisional contributions from the group’s commodities and global markets business that thrive on volatility are expected to continue, while its enormous infrastructure assets provide significant protection from inflation.

However, there is a risk that the Macquarie Capital division is vulnerable to decreased deal flow in the near term. And many analysts believe that despite posting a strong quarter, topping last year’s record profit will be challenging for the bank, with some suggesting that won’t be possible.

Still, the better-than-expected performance for the first quarter was met with a 2.7 per cent share price gain. It’s all a matter of managing expectations.