Prepare now for the post-coronavirus bond market, this investor says 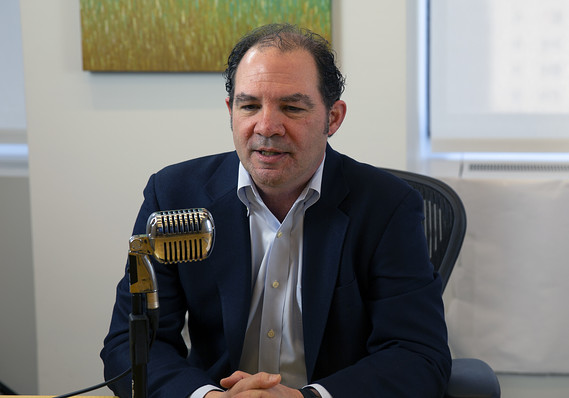 Kevin Flanagan, head of fixed-income strategy at ETF powerhouse WisdomTree, has watched fluctuations in bond markets his entire career. Now he’s taking a somewhat contrarian view of how investors should be positioning. Look past the current coronavirus concerns, he counsels, and “swim against the tide” to where bond markets will likely settle after the news cycle moves on.

MarketWatch spoke to Flanagan on Friday, February 21, a day when news related to the coronavirus was walloping the markets. Business activity in the U.S. contracted for the first time in four years in February, according to a survey from IHS Markit, the 30-year U.S. Treasury bondTMUBMUSD30Y, -5.15%  hit its lowest point ever as investors flocked to safety, and stocks took a bruising. The sell-off continued on Monday.

The interview that follows is lightly edited for clarity.

MarketWatch: Explain your premise about how fixed-income investors should think about the coronavirus.

Kevin Flanagan: I’m using the SARS episode as a framework to try to position where rates and the economy could be when the news cycle for the coronavirus has peaked. We picked a great day to have this discussion. Today without a doubt you began to see the first signs in the US of the economy being impacted. The question is, what happens when we do have a peak in the number of cases? How quickly does that snap back? Will it be a V shaped recovery or U-shaped?

A V-shaped recovery would be what we got from SARS. GDP went from a low of 0.6% in the fourth quarter of 2002 and then snapped back to 7% the next year. The 10-year Treasury fell 105 bps during SARS. When all was said and done, we ended 25 basis points higher than the level when SARS news first hit. 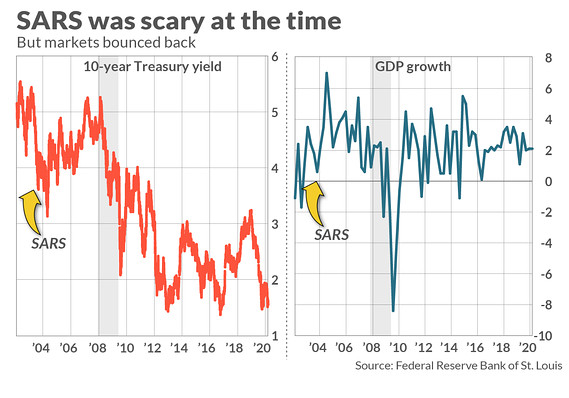 MarketWatch: We’ve discussed China’s very different place in the world now than when SARS hit. The World Bank estimates it accounts for 19.7% of the world’s economy now versus 8.7% in 2003, for example. What does that mean for using SARS as a model?

Flanagan: Some of the reading I have done suggests economists are expecting production in China to get back to 100% by late March. If that’s the case you shift into the V-shaped camp. If it extends into the second quarter it could be more prolonged.

But I think this is more of a first-quarter phenomenon. Say we get (U.S. GDP growth) close to zero. I don’t think it’s out of the realm of possibility that once the second half comes and we have seen the news peak, back of the envelope, I think 4% growth is fair. And for Treasurys, the 10-yearTMUBMUSD10Y, -7.79%  before the coronavirus was 1.80%-1.85%. If we were to recoup all that and add 25 basis points, that puts the 10 year at 2% or over.

You have begun to hear more about US-based companies seeing if there are American or other global alternatives where they could get their supplies from rather than China. If we do get a situation where supplier deliveries are disrupted, we could get some transitory inflationary pressures as well. If you need to get your supplies from US firms, they might be not as cost-effective as China.

Related: Here’s why investors are shrugging off coronavirus earnings warnings

MarketWatch: If there are stirrings of inflation and a stronger economy in the U.S. than elsewhere in the world, won’t we see capital flowing in, and simply depressing rates again?

Flanagan: We’ve seen that throughout this cycle. When US rates have a more visible spread versus other sovereigns, you do see money flowing in. I would look at it as a cap on rates, not as something that would push rates lower.

MarketWatch: What should investors do to prepare?

Flanagan: If we do head back toward 2% there is principal risk for moving too far out in duration. I think investors need to be thinking about that now. Often what you find is once the trend begins it can happen quickly.

We are suggesting a barbell strategy. (A “barbell” approach to bond investing involves short- and long-duration securities, avoiding medium-term bonds. That minimizes volatility as the yield curve shifts when rates are on the rise, and allows investors to capture the upside in short-maturity bonds as yields move higher.)

We think that’s a sound solution in this kind of environment, dealing with not just uncertainty, but timing uncertainties, and what it could mean for rates…. you’re not making an aggressive move. Skate to where the puck is going.