The head of industry super fund Hostplus, which represents mostly hospitality workers, is confident the $54 billion fund does not have liquidity problems and could meet demand for the federal government’s emergency access to super scheme.

Hostplus chief executive David Elia said the fund was "currently sitting on billions in cash and have billions more in liquidity if we are ever required to draw on".

However, Hostplus' latest financial records released in September show the fund has about $530 million in cash, making up just over 1 per cent of the fund's total assets, raising concerns about its ability to satisfy demand for the government's scheme.

People who have lost their job or 20 per cent of their income as a result of the coronavirus pandemic will be able to apply to withdraw two tranches of $10,000 tax-free from their superannuation, starting mid-April. 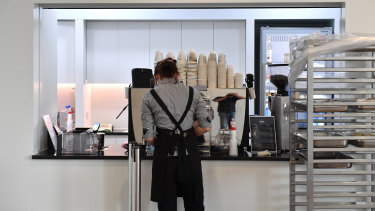 Hospitality workers have been one of the group’s hardest hit by the coronavirus.Credit:AAP

The government predicts just 1 per cent of the superannuation industry's assets will be affected but the industry has warned demand is likely to be much larger and may trigger a sell-off in shares and have wider impacts on the economy.

Some experts say the super funds that are most at-risk of liquidity issues are those with younger members with lower account balances and working in industries that are affected by the coronavirus pandemic.

“For some funds, it will be no issue; others it will be a difficult issue," KPMG partner Damian Ryan said. "What is the profile of the member of that fund? Are they in an industry where lots of workers have lost their jobs? That will mean their contributions will stop."

The typical Hostplus member is 35 years old, has an account balance of $37,000 and works in hospitality, tourism or sport, according to the fund's most-recent annual report released in June. These industries are among the hardest hit, with country-wide lockdowns shutting restaurants, stadiums and travel to curb the spread of the pandemic.

Mr Elia said the fund was well-positioned to respond to the early access scheme and reiterated support for the policy but cautioned members should use it only as a last resort.

"We have ample liquidity to support members undergoing financial hardship," he said. “We will have absolutely no problems in meeting any demand from members relating to the ERS [Early Release of Super].”

While the bulk of Hostplus' funds are in shares (50 per cent), the fund also has exposure to defensive assets such as property and infrastructure, which are harder to sell especially in times of low economic growth. September figures show the hospitality fund has more than $4 billion invested in infrastructure – with 24.6 per cent in airports ($990 million) followed by seaports (14.8 per cent) and toll roads (15.9 per cent).

Rest, the $60 billion fund representing the retail sector, said it was bracing for a blow-out in demand for the scheme.

"We believe the number of people applying for an early release of their super will far exceed the 1.6 million Australians initially estimated by the Treasury," a Rest spokesman said.

Andrew Boal, the chief executive of consultancy firm RiceWarner, which has predicted demand for the government's scheme could be almost twice as much as government estimates, said Hostplus could be more affected by the scheme than other funds.

"The hospitality sector has certainly been hit hardest and quickest by the impact on the economy. So their membership might have a higher than average proportion of people who might want to withdraw $10,000 in superannuation."