The chairman of investment strategy at JPMorgan's $2.2 trillion asset management arm studied 85 completed SPAC IPOs — and lays out the winners and losers in the 'significant wealth transfers' within the ecosystem

Perhaps nothing better illustrates just how hot SPACs have become than a recent rap song called “SPAC Dream” by recording artist Cassius Cuvée. His musical tribute to Special-Purpose Acquisition Companies was shared by billionaire Bill Ackman on Twitter last week with a simple call to “watch this.”

“If you in the SPAC game you know what I’m talking about. We sick of IPOs day one locking us out,” Cuvée raps about the blank-check companies that take others public without a traditional IPO. “I’m like a SPAC — what the hell’s that? You get in on the ground floor. It paid big, so I searched and then I found more.”

Ackman, who floated the largest SPAC to raise $4 billion last year, recently told The New York Times that “every friend is launching a SPAC” and “it’s like, ‘Oh, yeah, I got one, too.'”

Even songwriter Cuvée, who is a retail investor in his mid-30s, told The Wall Street Journal that his SPAC investments have doubled from $250,000 in September to half a million today.

In a broader sign of the continued red-hot craze in the SPAC market, 154 special-purpose acquisition companies have raised an aggregate of $48.5 billion in less than two months at the start of 2021, according to SPAC Research.

That’s already more than half of the $83.4 billion raised by 248 SPAC IPOs last year.

But retail investors jumping into the SPAC bonanza should be aware of the “significant wealth transfers” in the ecosystem, according to Michael Cembalest, chairman of market and investment strategy at JPMorgan Asset and Wealth Management.

The wealth transfer dynamic is illustrated in the chart below. 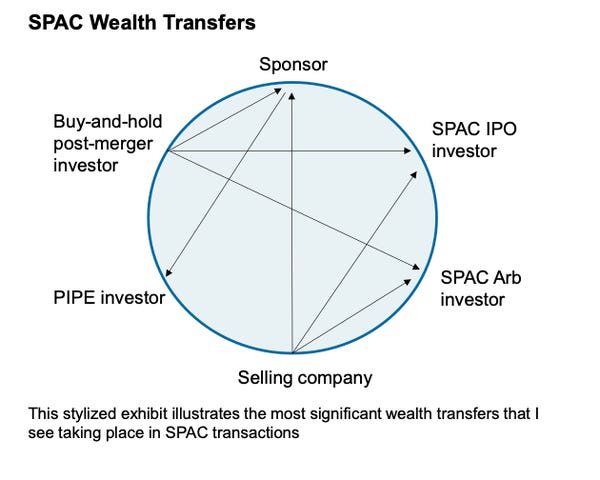 “In the SPAC ecosystem, there are five distinctively different participants. For two out of those five participants, the returns have been extremely high,” Cembalest said in an interview.

He continued: “The only way that you can have abnormally high returns in one part of an equation is to have subsidies coming from the other part of the equation.”

As a result, the sellers of the company, as well as the buy-and-hold investors, have essentially been subsidizing these “abnormal gains” by the sponsors and some of the early SPAC investors, Cembalest said.

It pays to be selective with SPACs

To be sure, by giving younger companies a speedier path to the public market, SPACs offer retail investors a venture capital-like access to “IPOs” that was once reserved for institutional investors.

And so far, the absolute returns have been high for SPAC investors across the board. However, the median relative returns for buy-and-hold investors are poor and not a good omen, according to Cembalest.

“In a rising market, a lot of things go up,” he said, adding that investors should always consider what they could have earned on their other investments. 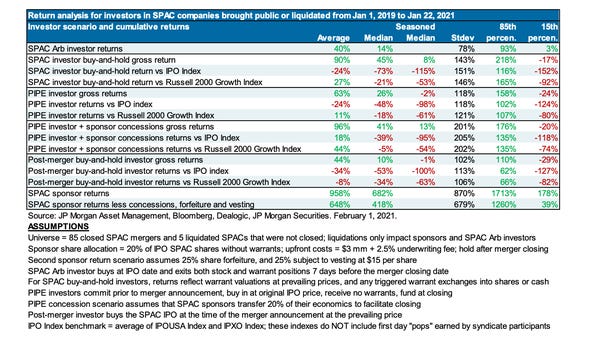 Because of the high standard deviations of these returns, meaning investors can get significantly higher or lower returns than median or average returns depending on which SPACs they invest in, it pays to be selective rather than buying and holding all the SPACs.

“This market, given the dispersion, argues for either doing the [SPAC] picking yourself or having a manager to do it rather than just buying all of the SPACs that come long,” he said.

The year of de-SPAC

Ultimately, it might be still too early to pass judgment on how the SPAC boom will pan out.

Most SPACs have up to two years to find merger targets. With the mushrooming of SPACs last year, these blank-check companies are clamoring for qualified private companies to take public.

“Some people in the industry are telling me that some of those small private companies are getting five, seven, and ten SPAC calls a day,” Cembalest said. “They’re all out looking for companies to take public because they only have a few years to do it.”

More importantly, whether the 264 SPACs that are still pending can find ideal acquisition targets and successfully take them public will shed more light on the fate of SPACs.