Payments disrupter Tyro has reported a 28.4 per cent lift in revenue and record growth in new clients but also a blow out in its statutory loss, as it booked its first half-year result as an ASX-listed company.

Following one of the most successful Australian floats of 2019, Tyro on Thursday announced first-half revenue of $117 million, with more than 6000 new merchants signing up to use the company's eftpos machines, which processed $11.1 billion in transactions, over the six-month period. 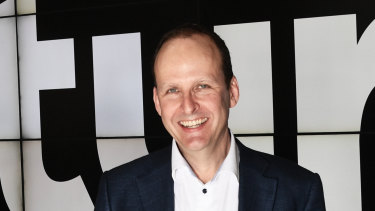 The company's statutory loss for the half blew out to $19.2 million from $7.7 million in the prior corresponding period. The company put this down to funding an expansion into online retail that resulted in employee costs jumping by 16.6 per cent and a 46.3 per cent hike in marketing costs.

Tribeca Investment Partners portfolio manager Jun Bei Liu, who bought into the IPO, said the results were ahead of the prospectus forecasts and predicted the company would double, or triple, in size in a few years.

"It's very important for them to continue to invest," Ms Bei Liu said.

'I don't really see neobanks as competitors to us because they are trying to do everything. Home mortgages, credit cards, the full gamut. We're not.'

Founded in 2003, Tyro is a payment specialist that competes with the major banks for merchant customers. The firm declared itself "Australia's fifth largest bank" by terminal count, as it booked a 26 per cent jump in eftpos modules to 58,993 over the period.

Analysts have fretted over the risk posed by competitors to Tyro, be it as a smaller company taking on the big banks or a larger company staring down the emerging neobanks. Morgan Stanley warned the big four could suddenly build a tech-enabled payments platform to stamp out Tyro, but Mr Cooke said "there is no point whingeing" about competitors.

"The way you win in this space is to actually do what the customer wants. We're focused on giving merchants the best possible payment product. If we get that right, people will come to us. It does not actually matter what the big guys do," Mr Cooke said.

Tyro became an authorised deposit-taking institution in 2015 and faces the same amount of red tape as the big four. Mr Cooke said he was not worried about regulatory costs despite complaints from other companies operating in the sector.

"Post the banking inquiry, there hasn't been a raft of new laws, there's actually been a step up in the enforcement and oversight of the existing framework. We've always worked within that framework and we're comfortable with that.

"It's part and parcel of being a bank and if you have the right focus in your business, your customers, you'll be fine," he said.

Tyro has seen gains in its banking operation, with merchant loans increasing by 82 per cent in the half to $37.4 million. Similar leaps have been made in the take up of its deposit offerings, with 3100 active accounts holdsing a total of $39.7 million as of December 31 last year.

"I don't really see neobanks as competitors to us because they are trying to do everything. Home mortgages, credit cards, the full gamut. We're not," he said.

Looking forward, Mr Cooke said there were plans for Tyro to enter the accommodation and hotels sector but added a lack of brand recognition was the biggest hurdle facing the company.