‘You don’t have to hit everything with a hammer’: APRA boss weighs housing risks

Last week the financial regulator warned banks it might play a part in cooling the sizzling Australian home lending market. On Monday its chairman Wayne Byres appeared to tone down the risk the regulator would further stick its regulatory oar into mortgage lending.

For the hordes of bank investors hanging off every word from the Australian Prudential Regulation Authority’s Byres, it was frustrating.

It was like watching APRA deftly walking a tightrope between ensuring the stability of the financial system and a disinclination to intervene. A lean one way before restoring balance as the audience oohs and ahhs. 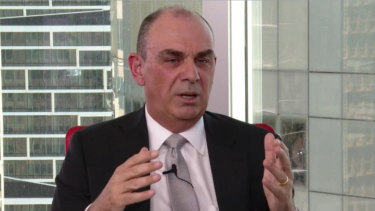 APRA chairman Wayne Byres at the UBS conference on Monday.

What makes it most difficult in second-guessing APRA’s appetite for ratcheting up its regulatory stance is that the regulator doesn’t work off strict metrics. It doesn’t declare that if household debt or home loan prices hit X then the regulator will move from amber to red.

Byres went so far as to call it the “vibe of the thing” – more akin to a big picture look that accounts for issues such as how well banks are performing to stay within reasonable risk parameters, the price of housing, affordability for new home buyers, movement in interest rates and (the biggie) household debt levels.

If one were to try and read Byres’ “vibe” based on his response to questions at the UBS Australia conference on Monday it would be that there was no rush to raid the toolbox for further macroprudential instruments to slow down loan growth.

Byres has long made it clear that APRA is not targeting house prices – but says they are a risk factor. That said, when house prices move up more than 20 per cent in a year thanks to historically low interest rates, it’s a fair bet that there will be borrowers (particularly new borrowers) at the margin who are struggling.

But with a mandate to ensure the stability of the financial system, APRA has previously used some big and efficacious instruments to cut a swathe through overheated lending in interest-only loans and investor loans for housing.

More recently it introduced the equivalent of sandpaper to fashion an increase in the interest rate buffer to ensure borrowers could handle repayments in the event rates increased.

So gentle was this macroprudential-lite move that banks braced for the second shoe to drop.

Even a few weeks ago APRA was considered an odds on bet to raid its macroprudential toolkit in the near future to deliver some real action – like the imposition of debt-to-income ratio.

And speculation around using debt-to-income or loan-to-valuation tools gained a bit of currency last week when, via a consultation update, APRA asked banks to ensure they had “the ability to limit” lending to riskier borrowers, based on these measures.

But for APRA there is a secondary balancing act. It is strongly disinclined to disadvantage some types of borrowers – particularly first home buyers and owner-occupiers.

“The step we took (is) like buying a little more insurance so that borrowers will not be overextended themselves”, Byres said.

APRA’s response requires it to work out the problem that needs to be solved and then what tools can be employed for different problems, he said.

“You don’t have to hit everything with a hammer,” was his analogy.

But will some heavy tool need to be used or any tool at all?

That’s where listening to Byres becomes even more frustrating.

On the one hand, he floated that a potential rise in interest rates could act as a self-correcting mechanism to take pressure off the problem. It would reduce demand for borrowing and take the strain from rising housing debt that arose from the current ultra cheap finance that has enabled so many to jump into the home market.

He also acknowledged that some lenders have started to move on interest rates, with fixed loan mortgage rates for new customers now starting to edge up. But he also noted that some variable rates were coming down.

“Banks are rejigging their pricing – we haven’t yet got to the point where it’s pretty clear rates are ratcheting up.”

Where investors don’t need direction from Byres is that the growth in house prices has been trending down since early this year. But we don’t know whether this is happening fast enough to ward off intervention. We also know that financial markets are betting on rates moving up next year.

It appears that when it comes to the need for a second and bigger regulation tool, APRA is having a bet each way.