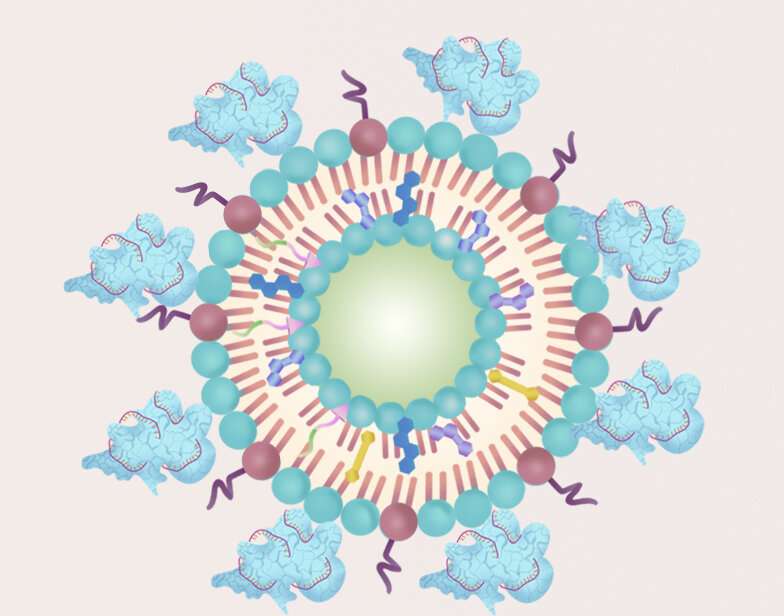 Hepatocellular carcinoma, the most common form of liver cancer, has a poor prognosis, and surgical treatment by removing part of the liver or transplanting a healthy liver is not suitable for patients with more advanced disease. Because ultrasound can penetrate deep within tissues, sonodynamic therapy could be an effective, non-invasive way to treat hepatocellular carcinoma. But currently, cancer cells can quickly overcome the therapy by activating a gene called nuclear factor erythroid 2-related factor 2 (NFE2L2), which deploys the cells’ detoxification and antioxidant enzyme defenses. CRISPR/Cas9 gene-editing technology has been used to knock down gene expression in the lab. So, Wei Feng, Huixiong Xu, Yu Chen and colleagues wondered if they could increase sonodynamic therapy’s effectiveness by using this technology to reduce NFE2L2 expression.

As a first step, the researchers encapsulated the CRISPR/Cas9 system and an ROS precursor molecule in lipid nanoparticles. Then, they treated hepatocellular carcinoma cells in a petri dish with the nanoparticles. The lipid nanoparticles were taken up by the cells’ lysosomes. Ultrasound treatment caused ROS formation, which ruptured lysosomes and allowed the CRISPR/Cas9 system to enter the nucleus and knock down NFE2L2 gene expression. The ROS also damaged other cellular components. As a result, significantly more cancer cells died from the sonodynamic therapy than without NFE2L2 gene editing.

Next, the team injected the nanoparticle treatment into mice with implanted human hepatocellular carcinoma tumors. After 15 days of the combined nanoparticle and ultrasound treatment, all of the tumors in the mice disappeared and didn’t come back. Mice treated with sonodynamic therapy alone had fewer tumors than untreated mice, but the addition of the CRISPR/Cas9 system significantly improved the therapy’s effectiveness. Because gene editing occurs only in tumor tissues under ultrasound irradiation, it won’t cause gene mutations in healthy tissues, the researchers say.