Peter Shaw knows all about the perils of salty winds and sandy soils and if he had to give one piece of advice for those new to gardening by the sea it would be to keep it simple.

After 30 years living in Anglesea and almost as many making coastal gardens for a living, Shaw says he has come to realise just how many plants are a no-go by the sea. The first thing coastal gardeners need to think about, the garden designer writes in his new book, Soulscape: connecting gardens to landscape, is not what they like but what will grow. 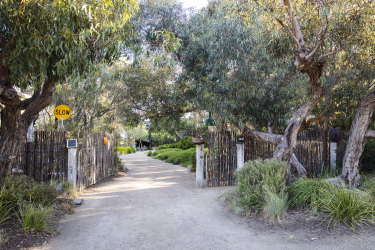 Peter Shaw’s home garden in Anglesea, as seen from the footpathCredit:Claire Takacs

Shaw – who together with his wife, benicar potassium chloride Simone, set up Ocean Road Landscaping in 1995 – has included 10 of his gardens in the book and says he wanted each to feel like it belongs in this landscape of wind-whipped heathlands, dunes, clay cliffs or tree-filled gullies.

Muted colours, rock and gravel mulches, repetition and plants “that just work” can be seen in all of them. Over the phone Shaw says he considers “super-tough” plants – rhagodias, correas and lomandras, for example – to be “the pillars” of a garden. “And then you can start to play with the edges.”

His own home garden has lots of playing around the edges. It’s the sort of garden that stops people on the footpath outside, for Shaw is a master at juxtaposition. He likes to pair grey and silver foliage with high-key colour and the laid-back with the orderly. 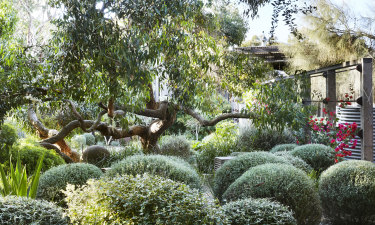 Many of his plants are everyday seaside fare but they are trimmed and trained in striking ways. The place is also spiked with unexpected flourishes like intense-red blood lilies, magenta-flowered bougainvillea and – most dramatic of all – emerald-green lawn mounds. 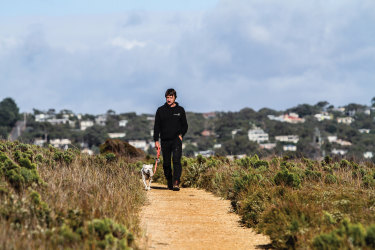 Shaw walking above the cliffs east of Anglesea.Credit:Harley Tribe

Native grasses weep over the edges of paths, shrubs are arranged in clusters and there’s barely a straight line in sight. But messy tangles there are not. Shaw creates distinct layers and a careful balance of mass and void. Everything has a place. The mature stringybarks that first drew the Shaws to the property are pruned to highlight their twisting trunks and, while some plants billow in the wind, many others are tightly clipped.

Most of Shaw’s plants are Australian with relatively low water requirements but he says that to “meet the expectations” he has for his garden some irrigation is needed. As a rule of thumb he advises that at least 80 per cent of a garden’s plants be bulletproof while the rest can be more risky or ephemeral. These “little dabs here and there” create more diversity and interest. 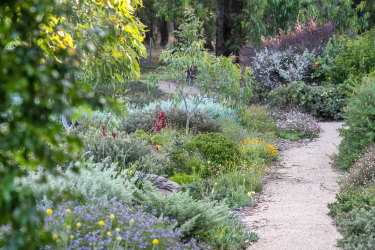 A low-maintenance mix of native and indigenous species in a Bells Beach garden that Shaw designed.Credit:Will Salter

Shaw says those gardeners not wanting to introduce more experimental or short-lived fare could mix things up by adding artwork or by playing with their pruning and clipping regimes.

And, when it comes to clipping and other forms of maintenance, Shaw says you get out what you put in. “The more you do, the better it looks.” Even so, he says it is important to keep the workload in moderation particularly as many gardens on the coast are only inhabited part-time.

But what he does always encourage those gardening on sandy, shallow soil to do is to add plenty of compost when planting to improve early growth. He also advises people to remove pernicious weeds, especially pampas grass and boneseed.

While some grasses, such as poa species, need to be cut down to the ground every year or two to keep them looking lively, others, such as Austrostipa stipoides, can be left longer.

As for those who don’t live by the coast but who want to bring a touch of the seaside to their city gardens, Shaw suggests using gravel mulches, muted tones and naturalistic styles. But he is wary of people taking this too far.

“It can be a little bit like taking your Bali holiday to the coast and planting palm trees. Gardens have to blend in to where you are. If you are in Melbourne, take your clues from the urban environment where there are more predictable conditions and less big trees to compete with.”

Soulscape: connecting gardens to landscape, Melbourne Books, $59.95, is out now.

Make the most of your health, relationships, fitness and nutrition with our Live Well newsletter. Get it in your inbox every Monday.

Most Viewed in Lifestyle