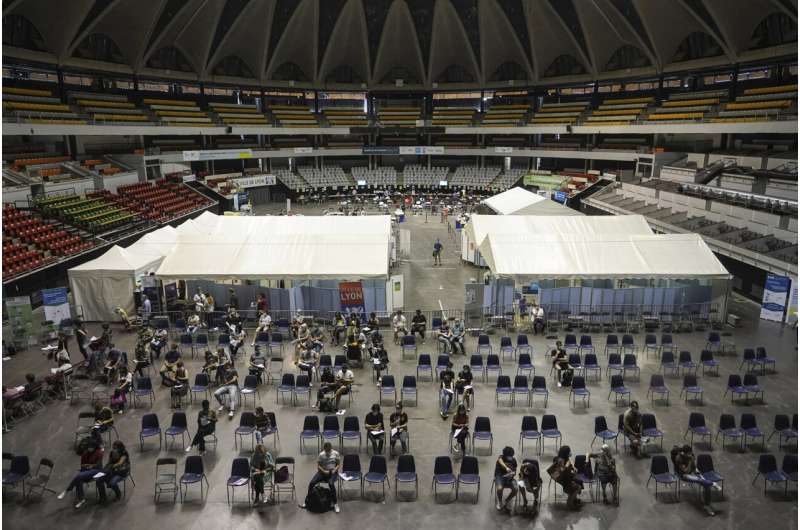 France on Wednesday started administering booster shots of COVID-19 vaccine to people over 65 and those with underlying health conditions as the delta variant spreads in the country.

France is the first big EU country to introduce widespread booster shots, and several other European countries are expected to follow suit.

Many countries are still struggling to administer first doses of COVID-19 vaccines and the World Health Organization had called for a moratorium on boosters and also urged governments to donate vaccines to needy countries.

People in France can get the shot on condition a minimum six-month period has passed since they got fully vaccinated with the Pfizer or Moderna vaccine. Those who received the single-dose Johnson & Johnson jab can get a booster shot of Pfizer or Moderna at least four weeks after they first got vaccinated.

In nursing homes, a nationwide booster campaign starts on Sept. 12. About 18 million people are estimated to be eligible for the booster shot, according to the Health Ministry.

Lucien Slama, a 90-year-old retired researcher, told The Associated Press he was “absolutely not” afraid to get the shot on Wednesday at a pharmacy in Paris.

“It’s my third injection and I remember the other two that caused me no issues at all,” he said. “When you see hospitalizations and the damages it (COVID-19) does, in the short and in the long run, what’s a jab every year or every six months? What does it matter?”

The French government followed the recommendations of the country’s health authority, the HAS, which said last month that “recent studies suggest a fall in the vaccine’s effectiveness, especially with the delta variant.” Older people and those with underlying health conditions are the most affected by the drop over time, the HAS said.

The booster shot was already available in France for some particularly vulnerable people, like transplant recipients and others with weakened immune systems.

The French government so far has made no decision regarding the potential extension of the campaign to the whole population.

France has been facing high numbers of confirmed infections since July, with a slight decrease in recent weeks—from over 23,000 per day around mid-August to 17,000 now. But many fear a reverse of the trend as children will go back to school after summer holidays on Thursday.

French government spokesperson Gabriel Attal warned Wednesday that “almost half of ICU beds are occupied by COVID-19 patients, which is still substantial and preoccupying. So it is imperative that we maintain our efforts … the upcoming weeks are not without risks.”

Almost 44 million people, or 65.6% of the French population, are fully vaccinated.

France’s decision to launch its campaign comes as the European Medicines Agency said it is reviewing data to see if booster shots are needed.

Israel has expanded this week its coronavirus booster shot program to include anyone over 12—the latest phase of a booster program that began in July with Israelis over 60.

U.S. health officials announced last month plans to dispense booster shots to all Americans. The campaign is expected to start by the end of September.