In a recent study posted to the medRxiv* pre-print server, researchers in Israel described the case of a severely immunocompromised cancer patient who developed a chronic severe acute respiratory syndrome coronavirus 2 (SARS-CoV-2) infection. 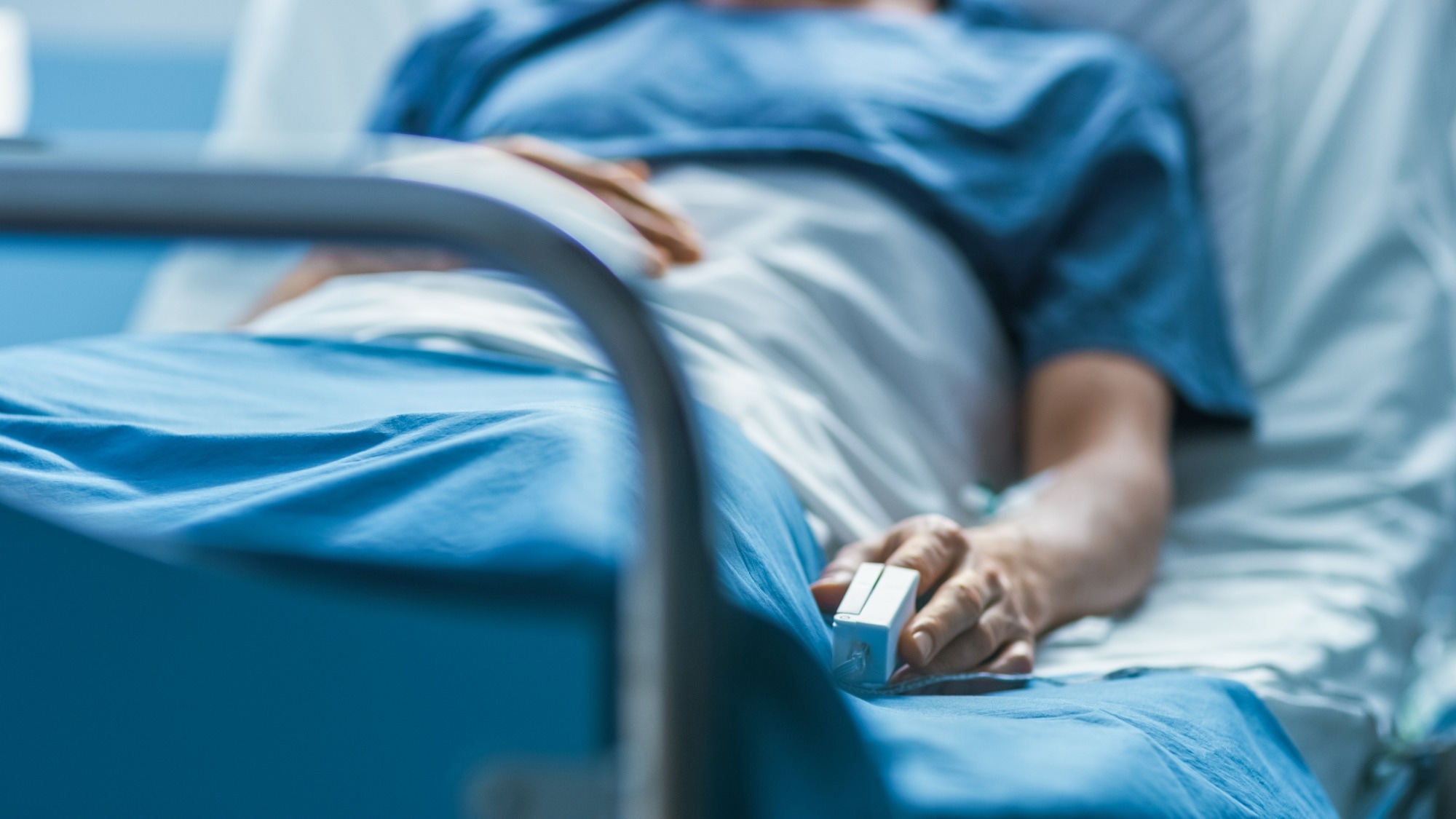 Typically healthy human hosts transmit SARS-CoV-2 for less than 14 days and do not transmit emerging mutations due to strong purifying selection. Conversely, the risk of persistent SARS-CoV-2 infection in immunocompromised individuals receiving the anti-cluster of differentiation 20 (CD20) medication rituximab is exceptionally high. Antiviral therapies, such as monoclonal/ polyclonal antibodies, ivermectin, and remdesivir, also do not always successfully treat such patients due to resistant viral mutants that emerge in some cases.

Subsequently, SARS-CoV-2 evolves more rapidly in such patients giving rise to mutations that increase viral fitness and enhance escape from neutralizing antibodies (nAbs). This could partially be the reason for the emergence of SARS-CoV-2 novel variants of concern (VOC), which are a threat to public health globally.

In the present study, researchers compared the mutational profile of the viral samples obtained from SARS-CoV-2 infected immunocompromised cancer patients with the samples representing the closest phylogenetic relative to identify mutations that emerged within her patient over the course of infection. They also compared emerging SARS-CoV-2 mutations in the presence and absence of nAbs.

The researchers tracked SARS-CoV-2 evolution in this patient for around six months, during which they obtained three nasopharyngeal samples (S1, S2, S3) for SARS-CoV-2 whole-genome sequencing (WGS). They estimated the global prevalence of various mutations using statistics from the global initiative on sharing all influenza data (GISAID) database. Further, the team captured the SARS-CoV-2 mutations within the patient and distinguished minor mutations with allele frequency (AF)<0.5 from major mutations, that became fixed and had AF>0.5.

The WGS results revealed the patient was infected with the SARS-CoV-2 Delta variant, lineage AY.43. These viral samples were genetically correlated with contemporary viral genomes collected in Israel and Europe. The earliest sample S1 was more mutated than its nearest phylogenetic relative, with 10 new substitutions. The genomes from samples S2 and S3 showed a pattern of accumulating mutation, although their distribution was uneven. Seven emerging mutations accumulated in less than a month, while another 10 in the next three months. 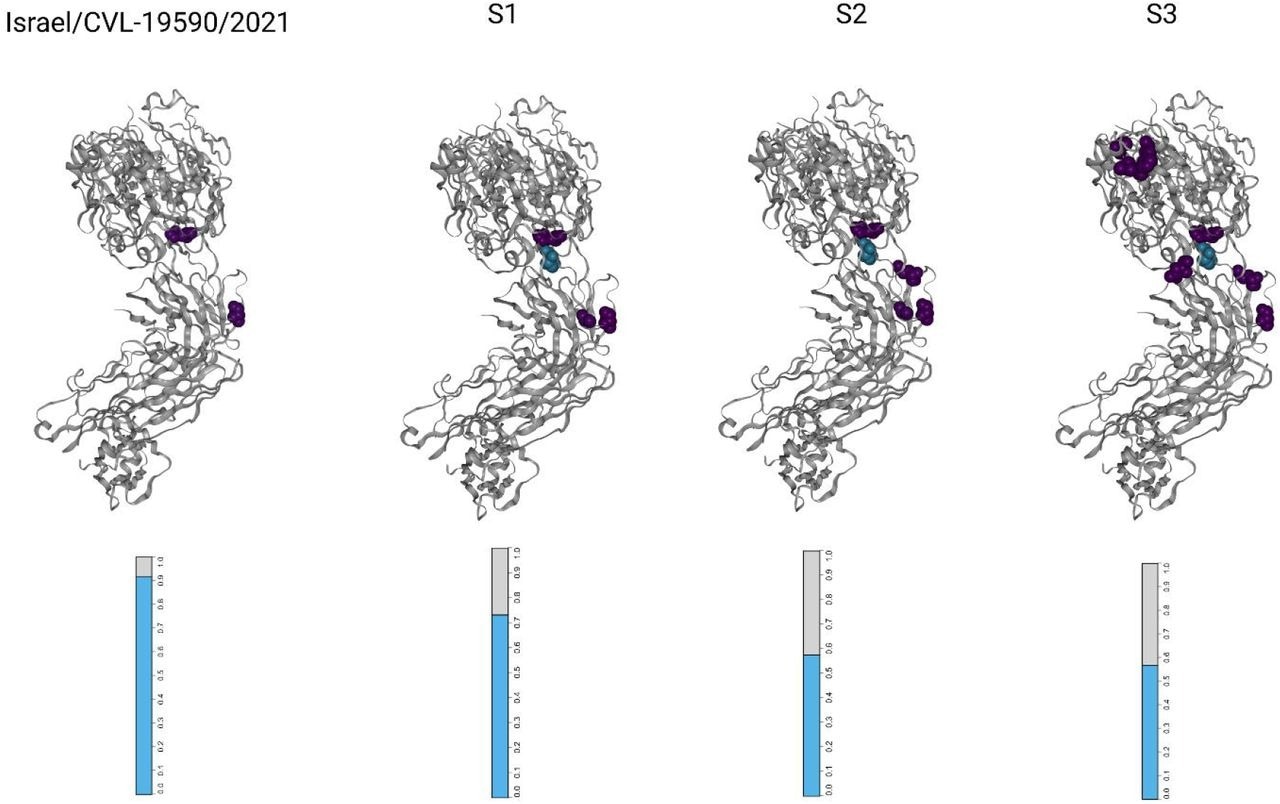 Visualizations of the SARS-CoV-2 receptor binding domains (RBDs), marked according to altered amino acid residues found in each sample. Each mutated residue is colored according to the magnitude of the largest-effect escape mutation at each site, as measured for the REGN10933+REGN10987 monoclonal antibody cocktail (see methods). The bar-plots at the bottom represent the estimated fraction antibodies that were either bound (cyan) or escaped (gray) from neutralization by polyclonal antibodies for each sample (see methods).

The receptor-binding domain (RBD) was the most densely mutated locus, with ~12 mutations per kilobase (mKb), and the Spike gene was the most mutated structural protein. It had 23 unique non-synonymous mutations, eight of which overlapped with the RBD locus. The distribution of mutations in the accessory proteins, open reading frame (ORF)8, ORF10, and ORF3a were 10.9, 8.6, and six mKb, respectively.

The second REGEN-COV mAb treatment enabled greater escape from antibody binding and decreased the efficacy of the antibody treatment even further. Subsequently, SARS-CoV-2 infectivity assays performed two months after the second round of mAb treatment showed infectious viral shedding. While RBD mutations continued to accumulate for another five months, they showed no correlation with increased antibody escape. Due to the immunosuppressive effects of the Rituximab treatment, the humoral response remained negligible. Overall, even two rounds of REGEN-COV treatments failed to achieve SARS-CoV-2 clearance, and SARS-CoV-2 infection remained unresolved in the patient.

The study demonstrated that SARS-CoV-2 survived two rounds of mAb treatments and remained infectious and viable despite an exceptionally high serum nAb concentration in immunocompromised patients. The adaptive immunity of the patient was severely compromised due to treatment with Rituximab. The mutations in the RBD region of SARS-CoV-2 enabled it to escape from neutralization in the absence of adaptive immunity. Furthermore, emerging mutations disrupted specific immunomodulatory viral functions, providing SARS-CoV-2 selective advantage in the immunocompromised host.