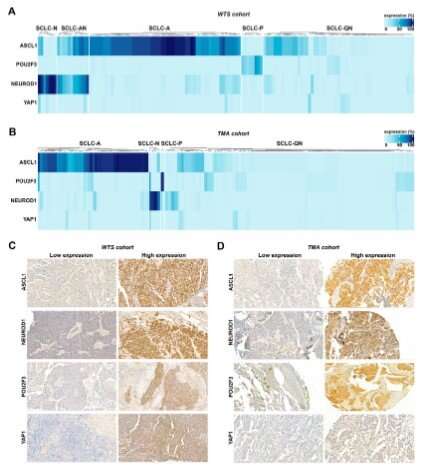 Small cell lung cancer (SCLC) is a malignant disease associated with a particularly high mortality rate. According to a new multicenter study led by MedUni Vienna and conducted in collaboration with researchers from the Czech Republic, Hungary, Slovenia, Sweden and the United States, SCLC can be divided into several subgroups in terms of clinical behavior. These subtypes respond differently to chemotherapeutics and targeted drugs. This opens up possibilities for personalized treatment for this type of cancer as well.

SCLC is a particularly aggressive cancer that typically occurs in smokers, exhibiting rapid growth and a high propensity for metastasis. Recent studies suggest that SCLC may be differentiated into specific molecular subtypes. However, due to the significant lack of tumor material and the problem of tumor heterogeneity, this information could not be effectively validated in a clinical setting.

Personalized approach to treatment and follow-up

“In contrast to the increasingly personalized approaches observed in non-small cell lung cancer, SCLC is still considered to be a homogeneous clinical picture and is treated in a standardized way both in hospitals and laboratories,” explains first author Zsolt Megyesfalvi from the Translational Thoracic Oncology Lab at the Medical University of Vienna’s Department of Thoracic Surgery. “We are now showing that differential expression of key transcriptional regulators clearly distinguishes five major SCLC subtypes.” The results also show that high ASCL1 protein expression is an independent negative prognostic marker, whereas high POU2F3 protein expression is associated with more favorable survival outcomes.

The researchers also comprehensively profiled protein expression using mass spectrometry-based proteomics in SCLC cell lines to assess the therapeutic relevance of each SCLC subtype. Study leader Balazs Döme, Head of the Translational Thoracic Oncology program at the Medical University of Vienna, commented: “We were able to use experiments with tumor cells to show that the levels of subtype-defining markers also influence the response to various targeted and chemotherapeutic agents in vitro. Notably, high POU2F3 expression, which is associated with better survival, correlated with sensitivity to standard chemotherapeutics. In contrast, high YAP1 protein expression correlated with poor response to chemotherapy. In addition, the abundance of subtype-defining proteins was also associated with the efficacy of certain targeted drugs such as CDK, AURK, and IGF-1R inhibitors.”