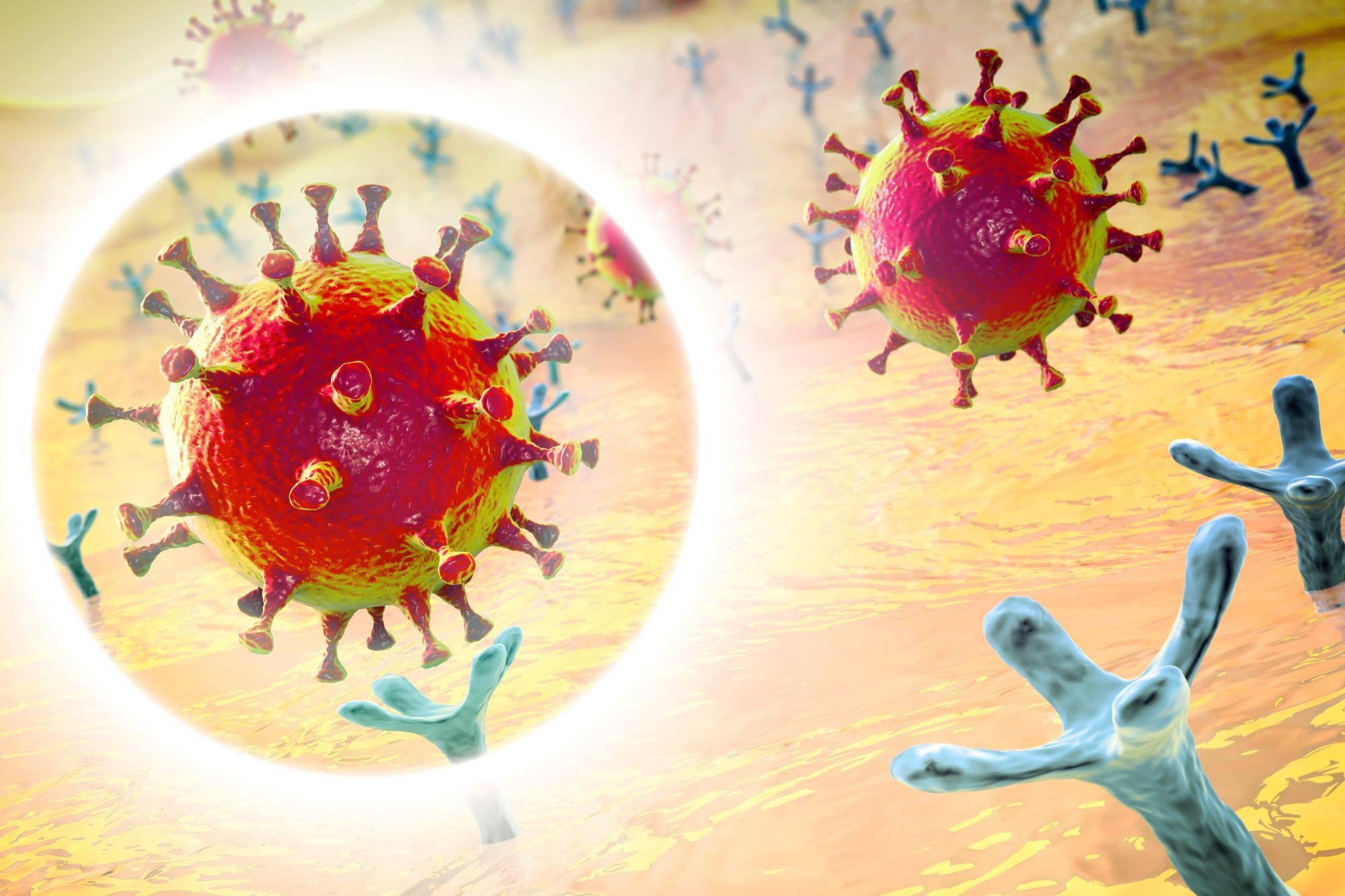 Due to the incapability of ancestral SARS-CoV-2 strains to bind to the mouse angiotensin-converting enzyme 2 (ACE2) receptor, mouse-adapted (MA) viruses or genetically modified (GM) mice were used to conduct SARS-CoV-2-related preclinical studies.

However, some of the evolved SARS-CoV-2 variants of concern (VOCs), such as the Beta (B.1.351) VOC, bind the murine ACE2 receptor and replicate in some wild-type (wt) mice species, including C57BL/6 and BALB/c mice. The B.1.351 VOC carries spike (S)  protein mutations, mainly the N501Y, lariam ny times facilitating efficient murine receptor binding in wt mice. Similarly, a study demonstrated that the K417N mutation was prevalent in a MA SARS-CoV-2 variant.

Together, these findings indicated that both the K417N and E484K mutations in the Beta variant's receptor-binding domain (RBD) facilitate efficient binding to murine ACE2 receptors than SARS-CoV-2 Alpha variants.

The team intranasally infected nine mice of each wt species with 105 median tissue culture infectious doses (TCID50) of the Beta B.1.351 variant. They euthanized all the mice on day 3 post-infection (pi) to harvest their lungs and quantify the infectious viral titers.

Further, the researchers explored the kinetics of the replication of Beta (B.1.351) VOC in SCID mice. To this end, they infected seven to nine weeks old male SCID mice with 105 TCID50 of the B.1.351 VOC. Between three to seven days pi, the team euthanized 10 test animals and harvested their lungs to quantify the infectious viral titers.

Finally, to assess the potential antiviral efficacy of molnupiravir and nirmatrelvir against the Beta (B.1.351) variant,  male SCID mice were treated twice daily with oral doses of either drug or vehicle. In addition, they treated test animals with 200mg/kg of molnupiravir and 300mg/kg of nirmatrelvir for three days starting from the day of infection. The team euthanized antiviral treated mice on day 3 pi for collection of lungs. 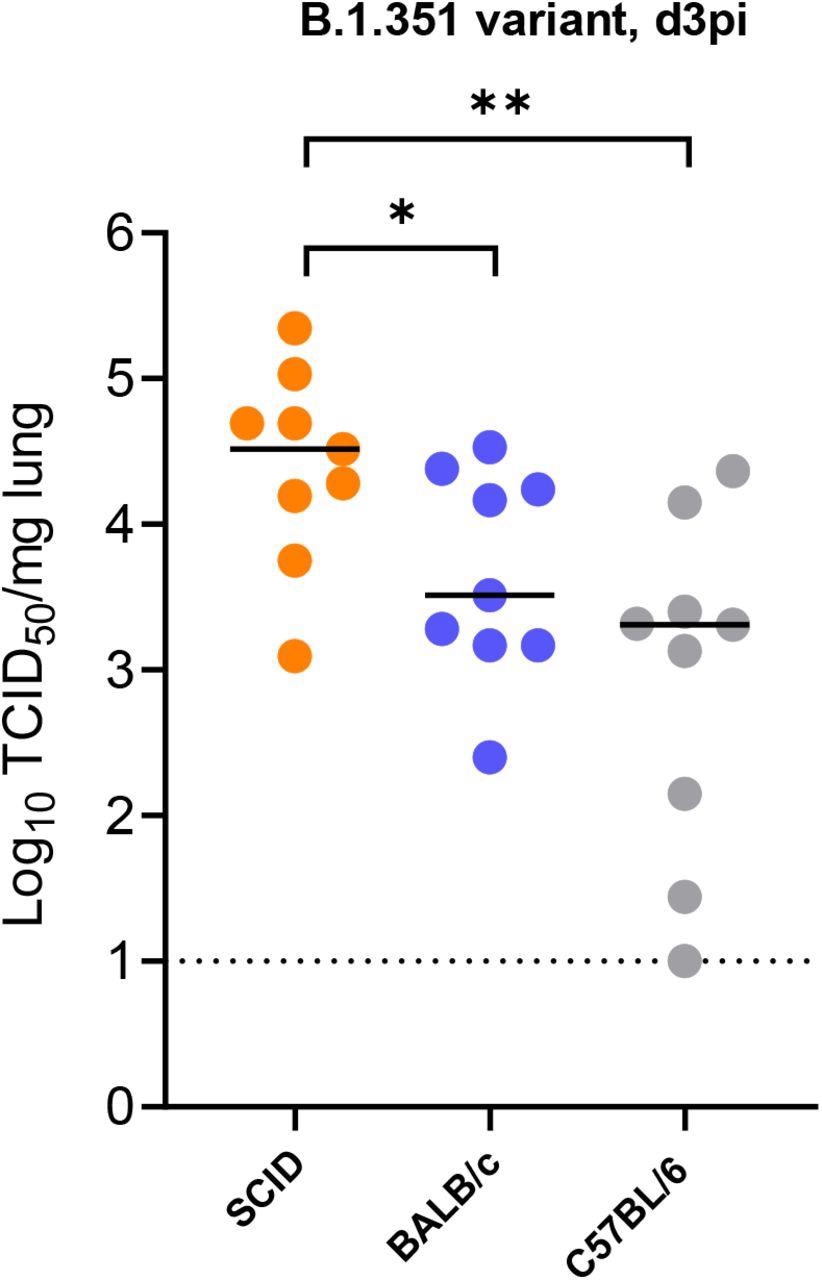 Replication of beta (B.1.351) SARS-CoV-2 in different mice. Infectious viral titers in the lungs of male SCID, male BALB/c and male C57BL/6 mice infected with 105 TCID50 of beta SARS-CoV-2 variants at 3 days post-infection (pi) are expressed as log10 TCID50 per mg lung tissue. Individual data and median values are presented. Data were analyzed with the Mann™Whitney U test. *P < 0.05, **P<0.01). Data are from two independent experiment with n=9 per group.

Infected mice treated with SARS-CoV-2 antiviral drugs, molnupiravir or nirmatrelvir, showed a substantial dip in the infectious virus titers in their lungs. The molnupiravir and nirmatrelvir-treated groups showed a decline of 1.9 and 3.8 log10 TCID50/mg tissue, respectively, in lung virus titers. Moreover, it significantly improved the lung pathology of the test animals. Notably, four and eight out of 14 animals in the molnupiravir and nirmatrelvir-treated groups, respectively, had no infectious viral titers. As expected, these animals did not lose weight due to the drugs.

The findings of the present study demonstrate the advantages of using SCID mice/ B.1.351 variant infection models for assessing the potential activity of SARS-CoV-2 antivirals in preclinical studies.

The SCID mice infection model was not suitable for the evaluation of vaccines and therapeutic antibodies against SARS-CoV-2. However, they proved beneficial for in vivo efficacy studies of SARS-CoV-2 replication inhibiting drug molecules.

Both molnupiravir and nirmatrelvir have previously been shown to inhibit the replication of the B.1.351 variant in Syrian hamsters. Likewise, they demonstrated high efficacy in the SCID mouse model. Notably, both drugs significantly reduced viral loads in the lung of infected mice with similar potency as they did previously in the Syrian hamster model.

These results are encouraging, especially as molnupiravir, marketed as Lagevrio, is used as an oral drug in several countries for coronavirus disease 2019 (COVID-19) treatment. Nirmatrelvir and ritonavir tablets, marketed as Paxlovid, are also approved for oral use by the United States Food and Drug Administration (FDA) against SARS-CoV-2 and other coronaviruses.