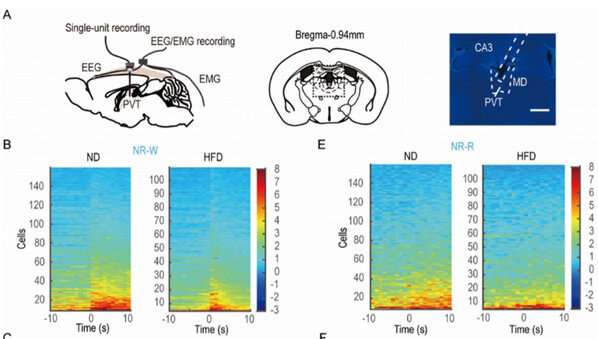 Obesity induced by a high-fat diet (HFD) is a growing epidemic and major health concern. While excessive daytime sleepiness (EDS) is a pervasive symptom of HFD-induced obesity, research findings suggest that reduced wakefulness could be improved by means of time-restricted feeding (TRF). However, the underlying neural mechanisms remain largely obscure.

On October 16, Prof. Li Haohong from the MOE Frontier Research Center of Brain & Brain-machine Integration at Zhejiang University and Prof. Zhang Luoying from the MOE Key Laboratory of Molecular Biophysics at Huazhong University of Science and Technology co-published an open-access article entitled “Time-Restricted Feeding is an Intervention against Excessive Dark-phase Sleepiness Induced by Obesogenic Diet” in the journal National Science Review.

Obesity, which has reached the epidemic level among many adults and children, occurs when energy intake chronically exceeds energy expenditure. Obese patients often fall victim to EDS, which exerts a traumatic impact on their vigilance, concentration and quality of life.

Excessive sleepiness during the active phase of the diurnal cycle is also reported in obese rodents, including genetically and HFD-induced obese models. TRF, celexa dilated pupils which is known to alleviate metabolic disorders and restore clock gene oscillation in the peripheral tissues of obese mice, can also rectify obesity-induced irregularity in the sleep-wake cycle.

The paraventricular thalamic nucleus (PVT), which spans the entire rostrocaudal length of the midline thalamus, fulfills distinct functions across the anteroposterior axis. It is associated with salience, arousal, and regulation of emotional and motivational behaviors. The PVT is also involved in the regulation of feeding behavior, with food intake further regulated by a complex interplay of circulating signals of energy homeostasis.

Previous studies have found that the PVT is sensitive to energy balance. Hypoglycemia induces elevated activity of PVT-to-nucleus accumbens (NAc)-projecting neurons, resulting in orectic effects. In contrast, administration of glucagon-like peptide-1 receptor (GLP-1R) agonists in the PVT reduces the activity of such neurons, producing anorectic effects.

Early studies in rats demonstrate that c-Fos (a marker of neuronal activity) increases in the PVT during the dark (active) phase compared to the light phase. The PVT belongs to the thalamocortical arousal system. It receives dense peptidergic fiber innervations from sleep-wake regulatory networks, including noradrenergic and serotonergic fibers from the brain stem, as well as histaminergic, orexinergic, and neurotensin-containing fibers from the hypothalamus. Extensive excitatory inputs to the PVT can activate the cerebral cortex to cause wakefulness. However, PVT lesions are likely to impair the integrity of wakefulness and induce sleepiness in humans and rodents.

Furthermore, recent studies have proposed that the PVT is also related to arousal independent of the light-dark cycle. In constant darkness, the level of c-Fos in the PVT at the time of scheduled access to a palatable meal rises. In addition, food entrainment changes the peak of daily oscillations of PER1 in the PVT. Thus, the activity of PVT neurons is assumed to play a critical role in maintaining wakefulness during the active phase of the diurnal cycle, which could be modulated by daily feeding schedules. As such, Li Haohong et al. applied TRF in an effort to prevent and reverse diet-induced PVT inactivity and fragmented wakefulness in the dark phase when mice are typically active.

In the study, the EDS phenotype in mice with HFD-induced obesity was recapitulated. Chronic Ad libitum (AL) HFD consumption shortened the duration of wakefulness and increased the fragmentation of wakefulness during the active phase. AL access to HFD decreased neuronal excitability and damaged the synaptic transmission of PVT, remodeling the excitation/inhibition (E/I) ratio.