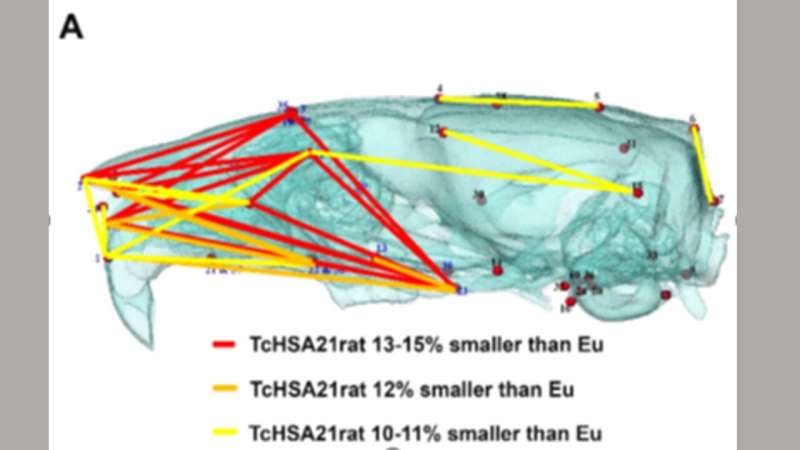 In pursuit of better ways to test new therapies and further explore the impacts of the unique genetics associated with Down syndrome, researchers at Johns Hopkins Medicine and Tottori University in Japan have genetically engineered and characterized what is believed to be the first rat model of Down syndrome.

A report of their research appeared Jan. 24 in The American Journal of Human Genetics.

Scientists have long sought ways to improve medical care for people with Down syndrome, especially those suffering the physical and mental challenges that are hallmarks of the condition. These include a higher risk of heart defects, gastrointestinal problems and difficulties with learning and memory.

“Developing an animal model that shares these features with human Down syndrome will allow us to test therapeutics more efficiently, with higher odds of developing ones that can work in people, buy generic viagra super active paypal pharmacy ” says Roger H. Reeves, Ph.D., professor of physiology at the Johns Hopkins University School of Medicine.

At its root, Down syndrome is an outcome of a so-called chromosomal “trisomy,” or tripling. A typical human cell has 23 pairs of chromosomes, which contain genetic instructions that govern its inner workings and how it interacts with the rest of the body. Down syndrome occurs when a person is born with an extra partial or entire copy of the 21st chromosome, a condition called trisomy 21. This extra chromosome’s effects are expressed widely across the body and its impacts vary among individuals.

Rats do not—as humans do—randomly produce offspring with extra 21st chromosomes, so the researchers set out to accomplish a complicated feat of genetic engineering to generate rats with an additional 21st chromosome.

The process included transferring the 21st chromosome from human white blood cells to mouse cells, then to chicken cells, then hamster cells and, finally, into a rat embryo.

At each transfer, the researchers made different genetic modifications, including the addition of a green glowing protein, which under ultraviolet light identified rats with extra 21st chromosomes.

Reeves and his team then assessed the genetically engineered rats’ cognition and physical characteristics for traits associated with an extra 21st chromosome.

To test the rats’ learning and memory, for example, the researchers conducted standardized maze tests with the genetically engineered rats.

Rats with an extra 21st chromosome took longer to solve the maze than genetically typical rats. They also had a harder time remembering the maze’s solution when challenged to solve the same puzzle over four consecutive days.

Other cognitive tests reflected that, overall, the rats with an extra 21st chromosome were more anxious and hyperactive than rats without the extra chromosome. These results are consistent with assessments in people with Down syndrome, who report having higher rates of anxiety, attention disorders and learning and memory impairments.

In anatomical studies, the researchers also found that a brain structure called the cerebellum was significantly smaller in rats with an extra 21st chromosome. The cerebellum is central to the body’s core functions, including message processing across the brain, and is much smaller in people with Down syndrome.

“There is already progress in developing pharmaceuticals that help the cerebellum grow in mice,” says Reeves. “If we eventually translate that into medicines for humans, we may be able to help people with Down syndrome improve their learning and memory skills.”

The distinct facial differences in people with Down syndrome—such as flatter faces, almond-shaped eyes and smaller heads—were also present in the rats. While people cannot look at a rat and determine whether its face looks different from a typical rodent, a computer program can measure the differences. The skulls were scanned in a CT machine and the data added to a computer modeling program, which revealed that the rats had shortened snouts. The bones making up these features in the rat skull correspond to those in human skulls that make up the characteristic facial “flattening” in people with Down syndrome.