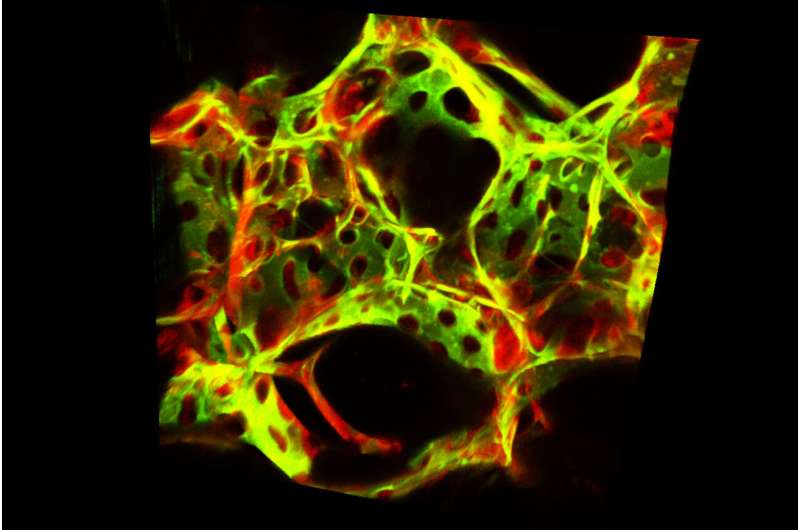 Scientists at the University of Illinois Chicago have analyzed gene expression data from more than 35,000 blood vessel cells from the lungs of mice and identified two subtypes.

One subtype, which they call immune endothelial cells, or immuneECs, preferentially expressed more genes involved in inflammation and the regulation of the immune response. The devEC subtype, for developmental endothelial cells, expressed more genes involved in cell development, dose depakote like cell regeneration and proliferation.

The findings are published in the journal JCI Insight. They could lead to better treatments for lung infections, which can be dangerously exacerbated by unchecked inflammation.

They found multiple groups of endothelial cells, with two dominant cell types—immuneECs and devECs—that changed over time during inflammation.

“Across our experiments, consistently we observed that the blood vessel cells of the lung seem to have these different functions and groupings, and the two predominant groups become even more distinct when responding to infection or stress,” said Rehman, UIC professor in the department of pharmacology and regenerative medicine and the department of medicine at the College of Medicine. “Importantly, we also analyzed publicly available datasets of human lungs and found similar distinct groups of endothelial cells as we had observed in the mouse lungs.”

In their experiments, Rehman and his colleagues studied cells from mice with healthy lungs and mice with lungs that were injured or fighting infections due to a bacterial toxin or influenza virus. While both subtypes were present in healthy and sick lungs, the gene expression profiles of each subtype further diverged in response to infections or injury.

“Part of the blood vessel endothelial cells become highly inflammatory, and part of them retain that ability to regenerate,” Rehman said. “Our data also suggested that after some time, the developmental subtype, which is essentially primed to regenerate, gives rise to cells that start proliferating and regenerating the blood vessels that were damaged during the infection.”

The UIC scientists say understanding the teeter-tottering balance between the subtypes and exploiting this division of labor could lead to targeted treatments for conditions involving the lung blood vessels like acute respiratory distress syndrome, which occurs during severe lung infections. In these infections, immuneECs may play a key role in activating the initial immune response needed to fight off the pathogens. However, during severe infections, the immune system can overreact and start damaging its own lung tissue even when the virus or bacteria are cleared.

Rehman said the findings are a good reminder, too, that our lungs are always in contact with the outside world, and this may be why lung blood vessels need such a fine-tuned balance between endothelial cell subtypes, which can activate or amplify the immune response, whereas other endothelial cells can help repair the blood vessels after the infection starts subsiding.