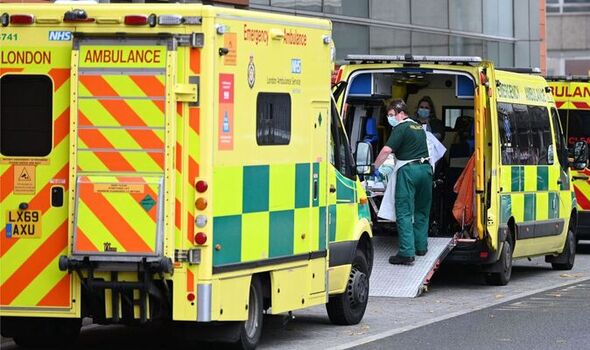 They have urged the Government to take immediate action and have shared research with NHS England executives suggesting a crisis in the system is leading to thousands of avoidable deaths every month.

A shortage of hospital beds has seen patients kept in ambulances or A&E. This in turn means fewer free ambulances and less space in A&E. Delays in treatment can also make a patient’s condition worse.

A report released last week revealed 35,000 patients were harmed as a result of ambulance delays in August alone.

Approximately 4,000 of these experienced “severe harm”, sometimes leading to death, according to the report by the Association of Ambulance Chief Executives.

The RCEM says the NHS is facing as big a crisis as at the start of the pandemic and unless more is done to increase bed capacity by winter, sick and dying patients will be forced to “double up in corridors,” or remain “stuck” in ambulances that are unable to offload.

Thousands will have operations and medical procedures cancelled, they warn.

An analysis on excess deaths in England and Wales shows that this year there have been 11,000 deaths above the five-year average, or over the number normally expected.

Excess deaths were above average for most of the pandemic due to increased Covid related deaths. However, while Covid deaths have remained low, since June there have been around 1,000 extra people dying every week from non-Covid causes.

“Frail, elderly, mentally ill and those who are acutely ill, injured and distressed are being failed. And this is not just older people but across the age spectrum. We now have an acute post-pandemic problem on a scale as serious as the pandemic itself.

“We need political engagement with the Prime Minister and Health Secretary to prevent more serious problems this winter.”

Dr Adrian Boyle, vice-chair of the RCEM, said the crisis stemmed from a lack of NHS beds.

“The system-wide problem is happening because our hospitals are full and that is leading to full emergency departments.

“We are short of 14,000 beds. In addition to this there are a lot of people in hospitals who cannot be discharged because they do not have safe social care in the community.”

A Department of Health spokesperson said: “The NHS has set out measures to rapidly boost capacity and resilience ahead of winter, including increasing the number of NHS 999 and 111 call handlers this year and creating the equivalent of 7,000 more beds.”