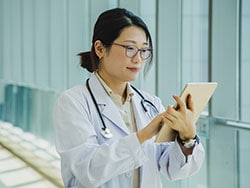 A new study by Mayo Clinic researchers shows that patients who use electronic messaging do not consistently call physicians by their formal title. Women doctors are more than twice as likely to be called by their first name regardless of patient gender, physician age, degree, stain treatment clothes lithium grease level, and specialty. Doctors of osteopathic medicine (DOs) and primary care physicians were also more likely to be addressed by their first name: DOs were nearly twice as likely and primary care physicians were about half as likely, according to the study.

The study reinforces a pattern that previous researchers have found: Patients — and fellow physicians — often address women doctors by their first names rather than title.

“A bias exists when women doctors are acknowledged by their first names and male doctors are greeted by their titles. That crosses a line and is disrespectful,” said Terri Malcolm, MD, vice-president of diversity, equity, inclusion and belonging for Dartmouth Health and a former practicing obstetrician/gynecologist. “It says that you don’t view me in the same regard as a male physician — that you think I’m a second-class physician.”

Another bias she has experienced as an African-American physician is when patients see her and assume that she is not a physician. She recalled one incident when a female patient in a hospital room saw her enter and then referred to her as a nurse to the person she was talking to on the phone.

“I just introduced myself to her as Dr Malcolm. She then apologized and we moved on. I am not saying that it didn’t hurt at all; it’s just that I couldn’t get sidetracked by these small blips,” Malcolm said.

DOs also face biases when it comes to their degrees. “I still have people say to me, ‘I am not sure what a DO is; I am not sure whether you’re a doctor,'” said Amy Davis, DO, clinical associate professor at Drexel University and an attending physician at Main Line Health in Philadelphia.

How They Handle It

When Davis is called by her first name, she considers whether or not a patient is intentionally communicating a lower status or disrespect.

“If I recommend that we change a patient’s opioid therapy to something else, for example, and the patient responds, ‘Look, Amy, I just want to you to write me a prescription,’ that’s when I look the patient in the eye and say, ‘I am Dr Davis, and here’s my recommendation.’ Otherwise, I just correct the patient,” she said.

Theresa Rohr-Kirchgraber, MD, professor of clinical medicine at AU/UGA Medical Partnership in Georgia, found herself in an awkward situation with a male patient who repeatedly texted her about his care and signed off by calling her “love.” She told him “it was making my husband uncomfortable,” which worked, she said.

Rohr-Kirchgraber has been called “honey” or “sweetie” by older patients. “I don’t take offense because they use Dr Rohr when they talk to me about their care.” She tells patients they can call her Dr Rohr, if it’s easier than saying Rohr-Kirchgraber.

None of the doctors who spoke to Medscape said that they asked their patients to call them by their first names. “The relationship has to be professional at all times,” said Rohr-Kirchgraber.

The only exception, Davis said, is when a patient asks permission to use her first name in the context of an established relationship.

“A patient may say, ‘We have known each other a long time. How do feel about me calling you Amy now?’ I usually say yes to that request,” Davis said.

Malcolm and Rohr-Kirchgraber set the tone by introducing themselves as doctors when they greet new patients. Malcolm also asks patients what they prefer to be called. “I establish right away how I want to be addressed and how the patient wants to be addressed,” she said.

Rohr-Kirchgraber also reinforces the message that she’s a doctor by wearing her long white coat with her ID prominently displayed when she sees patients. She has told her staff to always refer to her as “Doctor.”

Malcolm and other physicians have found it helpful to wear a “Doctor” badge underneath their hospital identification badge that has a different background color and highlights the word “Doctor” in bold letters.

Wearing these “Doctor” badges has made a difference in how often doctors are misidentified as nonphysicians. When 95 internal medicine residents wore these badges for 8 weeks, 64% reported in a survey that they were somewhat or much more likely to be identified as a physician. Female respondents were significantly more likely than male respondents to report that the badges improved their identification as physicians by patients and their families.

“It has helped, which is important. If physicians have to correct people frequently, even with a quick amicable resolution, that has a cumulative effect of being painful and demoralizing. That’s when it becomes a problem,” said Malcolm.

Christine Lehmann, MA, is a senior editor and writer for Medscape Business of Medicine based in the DC area. She has been published in WebMD News, Psychiatric News, and The Washington Post. Contact Christine at [email protected] or via Twitter @writing_health