10 Things in Politics: Hill staffers are venting about unlivable pay

Welcome back to 10 Things in Politics. Sign up here to receive this newsletter. Send tips to [email protected] or tweet me at @BrentGriffiths.

Here’s what we’re talking about:

1. INSIDE THE CAPITOL: Capitol Hill staffers aren’t paid enough to get by. In a city as expensive as Washington, DC, where the average monthly cost for a one-bedroom apartment is above $2,000, some interns and junior staffers take on side jobs on top of their grueling, 24/7 Hill responsibilities just to pay the bills.

Insider spoke with 14 current and former staffers in the House and the Senate about how low pay had affected their lives, careers, and ability to serve the public.

Here’s what we found:

These conditions make it likely that staffers don’t stay for long: “There is an incentive for underpaid staff to sell out to K Street and go lobby,” said Zach Graves of the conservative Lincoln Network, which joined 29 other groups across the political spectrum on May 17 to urge lawmakers to give staffs a raise.

A former staffer for Sen. Dianne Feinstein on his experience: 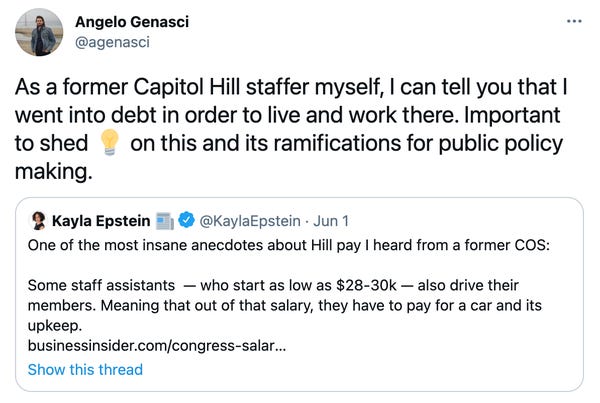 And that’s just for the people who get in the door: Low pay and a chronic lack of diversity among Hill staffers are also inextricably linked, some staffers said, with meager salaries preventing many Black, Latino, Asian American, and other nonwhite job aspirants from carving out a gainful career in Congress.

More on the side-hustles staffers have to do just to be able to serve the public.

P.S.: My colleagues want to hear from you too.

2. Biden reportedly signals he’ll compromise on corporate tax hikes: President Joe Biden privately offered to take back his proposed 28% corporate tax rate and instead focus on a new minimum 15% corporate tax rate, The Washington Post reports. Biden’s offer would be another concession meant to strike a bipartisan infrastructure deal, though the White House could still pursue the tax hike outside the infrastructure plan. More on where things stand.

Not everyone is pleased though: Democratic Rep. Jamaal Bowman of New York, a progressive lawmaker, slammed the possibility of excluding the corporate tax hike. 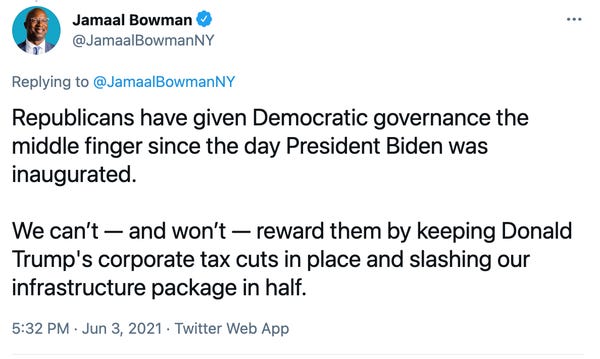 3. Pence says he and Trump might never “see eye to eye” about January 6: Former Vice President Mike Pence said he and former President Donald Trump might never agree on his actions on January 6, when he declined to try to derail Congress’ certification of Trump’s election loss. At an event in New Hampshire, Pence said he and Trump had “talked many times” since leaving office. Trump has continued to criticize Pence, who faced chants for his hanging during the riot. These are some of Pence’s most expansive comments on what he called a “dark day.”

4. Classified UFO report won’t draw a conclusion on aliens: US intelligence has found no evidence that the unexplained aerial events documented by American military pilots in recent years were related to aliens, but they also cannot rule it out, The New York Times reports. Officials briefed on the report’s findings told The Times that a classified report did determine that most of the incidents were not connected to the US government or any advanced US military research. An unclassified version of the report is expected to be released publicly later this month.

5. Prosecutors want defendants to pay $1.5 million for property damage from the insurrection: More than 500 people have been hit with federal charges in connection to the Capitol riot, according to an Insider database. As defendants take plea bargains, prosecutors are starting to negotiate financial restitution for the damage caused by the insurrection — even for those not pleading guilty to committing violence against government property. Prosecutors are asking for $2,000 for felony defendants and $500 for misdemeanor defendants.

6. US to send 25 million vaccine doses to Central and South America, Asia, and Africa: Nearly 19 million doses will be given through COVAX, the UN-backed global vaccine-sharing program meant to help vulnerable countries. The remaining 6 million doses will be given directly to allies and countries seeing surges in COVID-19 cases, including Canada, Mexico, South Korea, Egypt, Iraq, and the West Bank and Gaza. “This is just the beginning,” the White House coronavirus response coordinator, Jeff Zients, told reporters.

7. Rep. Marjorie Taylor Greene created a 17-foot mural of fan mail on Capitol Hill: The provocative Georgia Republican’s staff has been posting letters from supporters that now stretch to the ceiling. But the public show of support may not last. Democratic Rep. Alexandria Ocasio-Cortez of New York was forced to take down a wall of sticky notes outside her office. Greene’s display does appear to violate the same House policy that tripped up AOC.

8. FBI reportedly investigating Postmaster General Louis DeJoy over political fundraising: Agents have recently interviewed current and former employees of New Breed Logistics, DeJoy’s former business, and DeJoy has been subpoenaed, The Post reports. A DeJoy spokesman denied the official had knowingly violated any laws. Employees at New Breed Logistics previously told The Post they were pressured by DeJoy or his aides to attend political fundraisers or make donations to GOP candidates. They said they were paid back through bonuses, which could violate state and federal law. This is just the latest scandal for DeJoy.

9. Facebook is reportedly set to drop its politician exemptions: Facebook plans to start enforcing its content-moderation rules on politicians after giving newsworthy figures like Trump immunity. The move is a departure from Facebook’s historically hands-off approach to moderating content from high-profile political leaders around the globe. 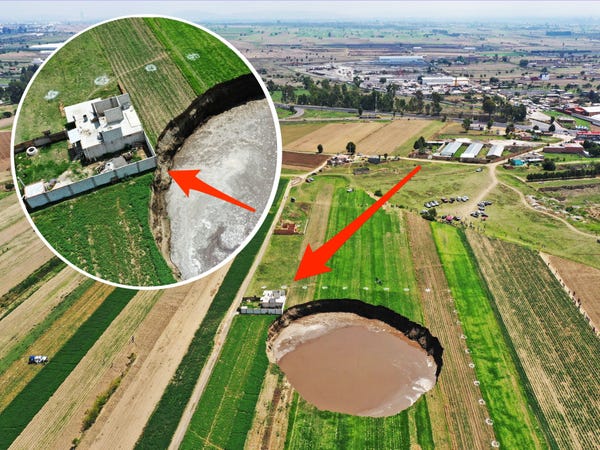 10. A sinkhole in Mexico is on the verge of swallowing a house: At about 65 feet deep and 300 feet wide, the water-filled sinkhole is encroaching on a home in Santa María Zacatepec in the Mexican state of Puebla. Officials say it probably developed as a result of extracting groundwater and cultivating land, which softened the soil. See the monstrous sinkhole for yourself.

Today’s trivia question: Which president wrote his doctoral dissertation on Congress and later became so fed up over filibusters while in office that he demanded a rule be created to weaken them? Email your guess and a suggested question to me at [email protected]