A Republican-led voting-supervision board in Arizona’s Maricopa County has described the state’s vote recount as a “laughing stock” that’s eroding faith in democracy.

In a Monday letter to Republicans in the state Senate who authorized the recount, the board said it would no longer cooperate with the effort, and called on the state GOP to end the process.

The ballot audit, which started late last month, was commissioned by Republicans in the state’s Senate and championed by former President Donald Trump, who maintains that the 2020 election was stolen from him. Observers and other critics have said the process is shambolic, and said auditors appear to be hunting for evidence on the basis of conspiracy theories.

Joe Biden flipped Arizona last year, becoming the first Democrat to win the state since 1996. Maricopa County is the most populous county in the state.

Monday’s letter was written in response to a series of groundless allegations from the auditors, Cyber Ninjas, and the Arizona Senate of possible malpractice by county officials conducting last year’s US Senate and presidential elections. The founder of Cyber Ninjas is a supporter of Trump’s election-fraud conspiracy theories.

“These accusations are false, defamatory, and beneath the dignity of the Senate,” the board of supervisors said in the letter.

“They are an insult to the dedicated public servants in the Maricopa County Elections Department and Office of the Recorder, who work incredibly long hours conducting the County’s elections with integrity and honor.” 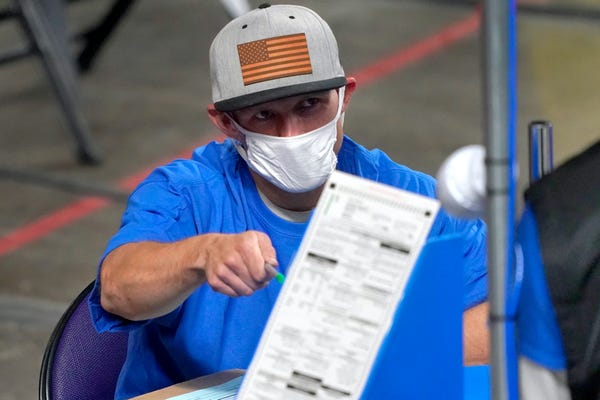 The letter went on to accuse those conducting the audit of operating a scam on the basis of groundless conspiracy theories.

“The Arizona Senate is not acting in good faith, has no intention of learning anything about the November 2020 General Election, but is only interested in feeding the various festering conspiracy theories that fuel the fundraising schemes of those pulling your strings,” the board said.

The board went on to rebut in length a series of allegations about the way that the 2020 elections in Maricopa County were conducted, and said it would not cooperate with the auditors in the future.

“We express our united view that your “‘audit,’ no matter what your intentions were in the beginning, has become a spectacle that is harming all of us,” the letter said.

“Our state has become a laughingstock. Worse, this ‘audit’ is encouraging our citizens to distrust elections, which weakens our democratic republic.”

At a Monday board meeting, Chairman Jack Sellers said: “I will not be responding to any more requests from this sham process. Finish your audit and be ready to defend what you’re finding in a court of law,” according to The Washington Post.

In a Monday night tweet, GOP Arizona Sen. Warren Petersen, who chairs the Senate Judiciary Committee, said the letter contained “unnecessary insults” and did not address all the concerns of auditors.

The recount was originally scheduled to end of May 14, but may now drag on for several months.

The result of the audit cannot be used to overturn the result of last year’s election. But Arizona’s secretary of state, Katie Hobbs, has said that she fears the audit could be used as a model to subvert the legitimacy other election results across the US.