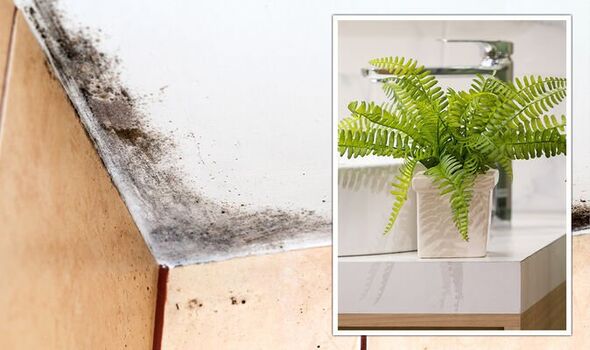 The most common causes of mould in the bathroom are usually lingering moisture caused by the lack of ventilation, leaky pipes, taps and toilets seeping into plasterboard and wood or damp cellulose materials such as grout, plasterboard and fabric which are the ideal breeding ground for bathroom mould.

Mould can be easily prevented if people take some simple precautions.

Cleaning expert Kerry Hale from Mira Showers explained: “Because the bathroom is often the most humid room in the house, mould and mildew is a common problem that many – if not all of us – have experienced at some point, mainly caused by lingering moisture, leaky taps, and damp cellulose materials.

“There are a few simple ways that you can prevent mould from appearing though.”

Some houseplants can lower the humidity in the air, which can prevent mould developing.

Best plants to improve air quality and reduce humidity in your bathroom:

The English Ivy, which can remove airborne mould from humid spaces, is a great choice for smaller bathrooms. It can be placed in a hanging pot or on top of a cabinet.

The purifying plant doesn’t need much sunlight to survive so it is a great choice for bathrooms without windows.

This is a great option for humid bathrooms, as it is a plant that thrives in indirect sunlight and moist soil.

Reed Palms can keep humidity at bay in the bathroom by absorbing moisture through their leaves. They can survive in low light, so they are perfect for keeping inside the home.

Kerry explained: “Purifying plants can be effective in lowering the humidity in the air, helping break down existing mould and preventing more from developing – English Ivy, Peace Lily, Boston Fern are some nice choices, and Tillandsia can be great too if you have a bright window.”

Open the window after a shower

Opening the window after having a shower will allow any excess moisture in the air to disperse naturally. Good ventilation reduces the chance of condensation settling on the wall and ceiling.

If there are no windows in the bathroom, a ventilator fan or dehumidifier could be a good addition in order to get rid of the excess humidity.

Kerry said: “If you have a window in your bathroom, opening it straight after you’ve showered will allow excess moisture in the air to disperse naturally and reduce condensation settling on the walls, ceilings and around the windows.”

Wipe around the shower

To help stop mould from setting into the shower, wipe down the whole area, including shower trays and wall panels, to remove any excess condensation.

Kerry commented: “If you don’t have a window, wiping around the shower will help remove the excess condensation that could turn into mould.”

Stick to a regular cleaning routine

Another important tip is to stick to a cleaning routine as a clean and dry bathroom is less prone to mould.