The recent acquisition of online homewares and furniture retailer Mocka has fuelled a better-than-expected result at manchester merchant Adairs, with the company's sales soaring for the half. 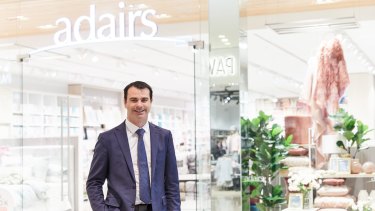 Adairs chief executive Mark Ronan said the company had a “significant” half.

That thesis appeared to play out in the company's half-year results released this morning, with net profit after tax increasing 4.2 per cent to $15.7 million, ahead of Morgans analysts' estimates of $14.1 million.

Online sales grew 31.6 per cent on a like-for-like basis, excluding the Mocka acquisition, and including Mocka is set to make up nearly 30 per cent of the company's total sales by the end of the financial year.

Total like-for-like sales grew 6.9 per cent, well ahead of analyst predictions of 3.5 per cent growth, bolstered largely by the company's massive increase in online sales.

Topline sales grew 8.6 per cent to $178.9 million, slightly ahead of expectations.

"The first half of FY20 was significant for Adairs with record levels of sales and profitability, the acquisition of Mocka and the finalisation of our domestic supply chain strategy," chief executive Mark Ronan said.

Overall guidance for the year was left unchanged, partially due to the potential ongoing effects of the coronavirus. However, illustrative pro-forma guidance showing contributions from Mocka boosted the company's full-year guidance well beyond consensus.

Assuming a normalised full-year contribution from the online retailer, Adairs expects sales to sit in the $400 million to $415 million range, and earnings to be between $52 million and $56 million. This is slightly above current consensus forecasts.

The new model is expected to save the company $3.5 million per annum after completion in 2022.

A dividend of 7 cents per share was announced, up from 6.5 cents in the prior corresponding half.