President Donald Trump again went after the United States Postal Service, this time claiming it is not “prepared” for a rise in mail-in ballots in the upcoming general election.

Voters are expected to vote by mail in record numbers in November as gatherings in public, including at polling places, threaten people’s health amid the coronavirus pandemic.

“There’s never been a push like this for mail-in ballots,” Trump said at Monday’s White House coronavirus briefing. The president went on to criticize primary elections in states like New York and New Jersey, which used expanded mail-in voting this year, and railed against Nevada’s Democratic Gov. Steve Sisolak, who’s expected to sign a bill to mail ballots to all eligible voters.

Trump then went in on the postal service, which has been a target of his attacks for years.

“By the way, I have to say, the post office for many years has been run in a fashion that hasn’t been great. … And I don’t think the post office is prepared for a thing like this,” Trump said of mail-in ballot use in the general election. “How can the post office be expected to handle?”

The president went on to list how USPS receives not only “regular mailing,” but also “a massive number of purchases” from “the internet” and Amazon, calling this “a tremendous strain.” (Some states provide secure drop boxes for voters so they can opt not to send their ballots through the mail, however.)

HuffPost did not immediately get a response from USPS for comment.

Trump has repeatedly and baselessly claimed elections using mail-in ballots are “fraudulent.” There is no evidence of this.

Meanwhile, in recent weeks, Postmaster General Louis DeJoy — a major Trump campaign donor appointed in May — has recently made changes to the postal service in the name of cutting costs, including slashing overtime for employees and telling them to leave mail behind if it will delay carriers’ routes — all of which could slow down mail delivery in the coming months.

With the November election less than 100 days away, the U.S. continues to lead the world in coronavirus cases and deaths, with more than 4.6 million confirmed cases and over 155,000 dead from the virus so far. 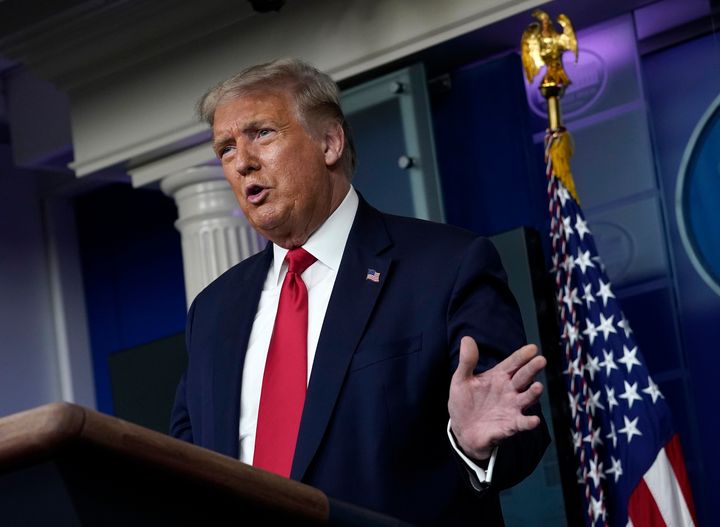 After seeing revenue fall for years, the postal service reached an agreement with the Trump administration last week on the terms of a $10 billion loan the agency can draw on if it needs aid during the coronavirus pandemic.

On Monday, former Vice President Joe Biden, Trump’s 2020 election rival, denounced the president’s baseless attacks on mail-in voting during a virtual campaign fundraiser, saying that Trump would do everything in his power to “argue this election is fraudulent.”

“He suggested we should postpone the election, full of just bald-faced lies about how mail-in votes were fraud,” the presumptive Democratic presidential nominee said. “Well look, he’s calling out any effort to exploit this pandemic for political purposes. It distracts from his complete failure.”

Last week, Trump tweeted unfounded claims that universal mail-in voting would make the November election “the most INACCURATE & FRAUDULENT Election in history,” and suggested the election should be delayed.

The president has no power to do this, and lawmakers on both sides of the aisle nixed the concept.

Asked in Monday’s coronavirus briefing if he’d issue an executive order on mail-in ballots, Trump said: “Well, I have a right to do it. We haven’t gotten there yet, but we’ll see what happens.”