Millennial juggernaut Afterpay has come crashing down to earth, with more than $11 billion wiped off its market value in less than a month amid rising concerns the buy-now-pay-later operator's customers could struggle financially as the economy falters.

Afterpay's shares plunged more than 35 per cent on Wednesday alone to a low of $11.92 amid growing signs that the world is facing a prolonged downturn triggered by the coronavirus pandemic.

This includes a warning from ratings agency S&P of a global recession and the possibility that Australian unemployment could hit its highest point since the 1990s as industries such as airlines, retail and hospitality are hit by the virus. 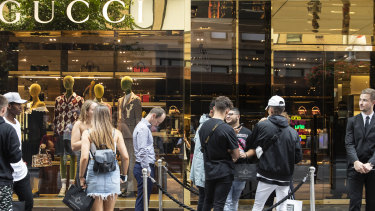 The sharemarket is worried that lowly paid millennial shoppers may provide a coronavirus-induced headache for providers such as Afterpay. Credit:Louie Douvis

"The falls for buy-now-pay-later versus traditional financials have likely been steeper as reduced consumer demand and higher unemployment would likely be focused in younger millennials who make up a disproportionate share of the retail workforce and buy-now-pay-later users," said Andrew Mitchell, senior portfolio manager with Afterpay investor Ophir Asset Management.

"Financials in general have fallen significantly over this time on the triple whammy of potentially reduced availability of funding, higher funding costs and a likely bad debt cycle brought on by reduced consumer demand and higher unemployment as social containment measures bite," he said.

Both Afterpay and Zip attempted to soothe market concerns last Friday about the pandemic potentially triggering a wave of defaults from their younger shoppers and also harming the extensive debt funding needed to support their consumer finance business models.

"We are well prepared to respond to any changes in customer repayment behaviour, however, we have not seen any changes relative to past performance," said Afterpay in a statement on Friday which was provided in response to "market enquiries".

Afterpay was not the only buy now pay later provider caught in the downdraft.

Zip Co and Flexigroup – which also have more traditional consumer credit businesses to rely on – dropped as much as 20 per cent on Wednesday to lows of $1.275 and 79.5c respectively. Splitit, which faces no bad debt risk as it relies on customers shopping with their credit cards, dropped as much as 16 per cent to a low of 26c.

Afterpay shares soared last year as investors valued the stock on the basis of its potential to dominate payment services in markets such as the US and UK, rather than the losses it has been generating.

As recently as August last year it was valued at more than 34 times its sales. The Commonwealth Bank is currently trading at 12 times its future earnings, according to ASX data.

An Australian Securities and Investments Commission (ASIC) report in 2018 said about 44 per cent of buy-now-pay-later customers had an income of less than $40,000 a year and there were already indications of a real risk that such commitments could contribute to financial over commitment by users.

A submission to ASIC at that time from the Personal Insolvency Professionals Association (PIPA) identified the buy-now-pay-later sector as a growing problem for insolvency professionals.

"When debtors apply for assistance, the buy now, pay later credit is often the most recent debt, obtained at a time when the debtor was already struggling with other loans, indicating that the debtor was an insolvent borrower," the association told ASIC.

Afterpay has been able to defy the naysayers up to this point and reported a falling proportion of bad debt in its most recent results.