Amazon union push gains momentum across the US

Amazon has challenged hundreds of ballots amid the company's closely watched union election in Alabama, according to reports.

The Retail, Wholesale, and Department Store Union (RWDSU), which the employees aim to join, said in a statement Wednesday that "hundreds of challenged ballots mostly by the employer" will be addressed after the public count.

Meanwhile, all unchallenged ballots have been cleared.

"As the ballot envelopes are opened and the ballots are counted there’s a possibility that more issues could impact the final results," according to the statement. 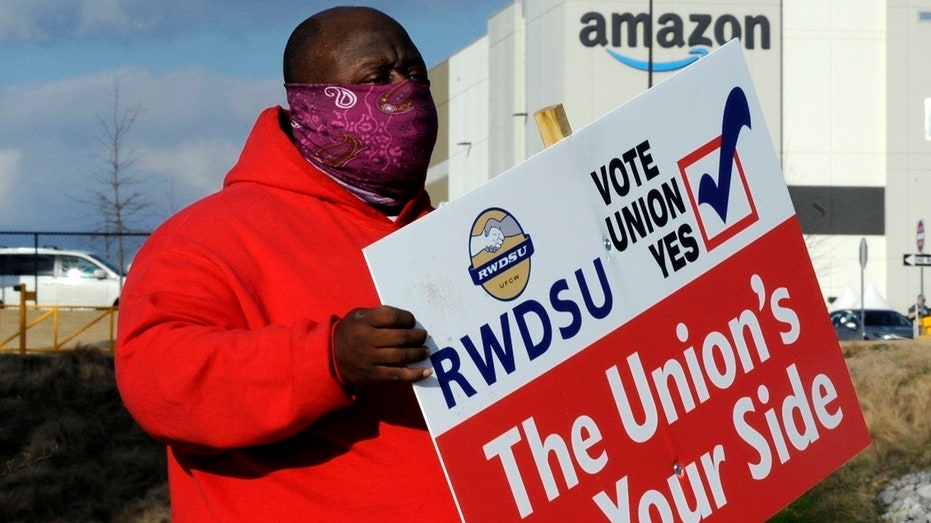 Michael Foster of the Retail, Wholesale, and Department Store Union (RWDSU) holds a placard outside an Amazon facility where labor is trying to organize workers in Bessemer, Alabama, on Feb. 9, 2021. (Associated Press)

More than 3,200 mail ballots were received by the U.S. National Labor Relations Board (NLRB) in the election, the union said, according to Business Insider. The election was open to more than 5,800 workers at Amazon’s warehouse in Bessemer.

The workers are voting on whether to join the RWDSU. If that happens, their warehouse would be the first Amazon facility to unionize in the U.S.

Labor organizers hope a victory in Bessemer will spark workers nationwide — and not just at Amazon — to consider unionizing. For Amazon, it would potentially mean a big blow to its profits and could alter its business operations.

They want Amazon to give warehouse workers higher pay, more break time, and be treated with respect. Many workers complain about long workdays and only two 30-minute breaks.

Amazon has been vigorous in its defense, both blasting progressive members of Congress in response to criticism and holding mandatory meetings on why the union is a bad idea. Amazon has argued that the Bessemer warehouse created thousands of jobs with an average pay of $15.30 per hour, which is more than twice the minimum wage in Alabama.

"RWDSU membership has been declining for the last two decades, but that is not justification for its president Stuart Appelbaum to misrepresent the facts. Our employees know the truth — starting wages of $15 or more, health care from day one, and a safe and inclusive workplace. We encouraged all of our employees to vote and hope they did so," an Amazon spokesperson said in a statement to Fox Business.

According to Reuters, Amazon, the union, and the NLRB can challenge the ballots if they assume they have been tampered with, are fraudulent, or are from a worker deemed ineligible to vote.

Balloting in the Bessemer warehouse began in early February despite the company's objections, including a push for in-person voting. Voting wrapped up March 29 and the first stage of vote counting began the day after.

A public vote count is expected to begin Thursday afternoon or Friday morning, the RWDSU said.

Fox Business' Samuel Dorman and The Associated Press contributed to this report.