American cities are victims of 'progressive wokeness' and people are waking up: Joe Borelli

American cities victims of ‘progressive wokeness’ and people are starting to waking up: NYC councilman

JOE BORELLI: No matter what word salad Jen Psaki tries to come up with to serve, you know, when you cut the funding for the Parks Department, the grass is going to grow higher on the softball fields. That’s the same thing with defunding the police. When you have less police out there investigating cases on patrol, you’re going to have more crime. The truth is, America has become victims of the progressive brokenness that have tried to convince us that police and not criminals and gangs are the cause of violence in our community. And thankfully, it seems like New Yorkers and people around the country are starting to wake up to it.

Unfortunately, when you have someone like Mayor Lightfoot there, when you have people who run most big cities around the country not taking a serious look on the way police interact with the community and how aggressive police should be going after people that carry guns like this person obviously did, then you’re going to see more incidents like this caught on camera.

There really is though a clear sign that New York needs a drastic change of direction when you have the front runner’s only volunteer getting stabbed with an ice pick when they’re hanging up posters for reelection. And it just goes to show how low the bar is, though, that we’re saying Eric Adams is a good choice for mayor solely because he’s the only one or one of the few that are even acknowledging the police’s role in reducing crime in the future. In New York City, some of the other candidates don’t even want to admit that the police should carry guns. 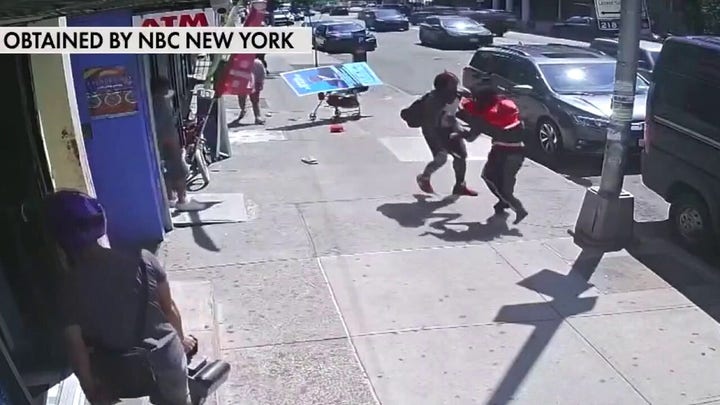