America is on the verge of an unprecedented eviction crisis. On Dec. 31, the Centers for Disease Control and Prevention’s nationwide eviction moratorium will expire. According to the National Low Income Housing Coalition, somewhere between 12 million and 17 million households — up to 40 million people — have little or no confidence that they can pay their rent and avoid eviction if they don’t get relief.

“We’re looking at the very real possibility of tens of millions of people losing their homes this winter during a spike in COVID-19,” said NLIHC President Diane Yentel.

The looming eviction crisis is not only a moral failing and a financial catastrophe, but an unprecedented public health disaster. A large body of evidence has found links between evictions and health outcomes ranging from homelessness to domestic violence to chronic stress.

“If we get a wave of mass evictions in the new year, we’re going to see a huge range of long-term effects,” said Kathryn Leifheit, a UCLA researcher who studies the effect of housing disruptions on health.

Children often have to transfer schools after an eviction, she said, which can affect their cognitive skills. Due to the difficulty of securing an apartment with an eviction on their record, adults often end up moving to more distant and lower-quality housing. Even being threatened with eviction can spike blood pressure, exacerbate mental illness, and provoke chronic stress.

And, in a darkly ironic twist, evictions may even end up prolonging the pandemic that triggered them in the first place. Before the CDC enacted its nationwide eviction moratorium in early September, the agency left it up to states to decide what to do about tenants who fell behind on their rent. During the spring, 44 states enacted short-term moratoriums. In the summer, 33 of them lifted the bans.

Leifheit and her co-authors published a study last month that found states that lifted their eviction bans had double the cases and five times more deaths compared to states that left their eviction bans in place. North Carolina, for example, banned evictions in April. When the state lifted the ban June 20, renters were left unprotected until the CDC moratorium went into effect on Sept. 4. Authorities carried out an estimated 18,000 evictions in those three months. Leifheit’s study found this resulted in 15,690 extra coronavirus cases and 304 deaths.

Across the U.S., evictions led to 434,000 COVID-19 cases and nearly 11,000 deaths. But only a small portion of those deaths likely occurred among people who were evicted themselves, Leifheit said. The vast majority were second- and third-degree infections caused by evicted tenants coming in contact with other people through their households or jobs.

“We tend to think about the link between evictions and COVID-19 as an individual process — someone gets evicted, they get COVID-19 and then, in the worst-case scenario, they die,” Leiftheit said. “But a wave of evictions ends up increasing the risk for everyone.”

Even before the pandemic, America’s renters were in crisis. In 2018, nearly half of tenant households were spending over one-third of their income on rent. Black people, Latinos and families with children made up the bulk of America’s 3.6 million evictions every year.

The pandemic has put that crisis on steroids. Since the start of the year, roughly 46 million Americans — roughly one-quarter of the workforce — have filed for unemployment benefits. The Urban Institute, a think tank, estimated in June that 20% of renter households included at least one person who had lost their job in the first two months of the pandemic.

So far, the economic effects of the pandemic have hit renters disproportionately hard. The sectors most severely impacted — retail, restaurants, bars and tourism — employ large numbers of low-wage workers. In October, the NLIHC found that 26% of Black renters and 18% of Latino renters were behind on rent, compared to just 10% of white renters. Those who could pay were increasingly relying on credit cards, selling possessions and borrowing money from family and friends.

“We’re seeing a different population facing eviction than we’ve ever had before,” said Pam Bridge, the director of advocacy for Community Legal Services, a Phoenix-based legal aid nonprofit that helps tenants avoid eviction. Over the last four months, Bridge has started to see clients from a wider range of the income scale. She used to mostly see unemployed and hourly workers. Now she gets office workers and Uber drivers.

“The people being evicted aren’t necessarily low-income anymore,” she said. “We’ve got a lot more people dealing with evictions who have never been through one before and have no idea how the process works.”

So far, COVID-19 hasn’t resulted in an avalanche of evictions, mostly due to the CDC’s soon-to-expire nationwide eviction moratorium. (The CDC declined to comment for this story.) The moratorium order, however, contains two significant loopholes: Tenants have to prove that the pandemic directly caused their failure to pay rent, and it only stops the evictions ― not all the legal processes and fees that come along with them.

These provisions mean that a significant number of evictions are still trickling through the courts. Bridge said in many cases she deals with, the court has issued a judgment saying the tenant needs to vacate their apartment, but sheriffs won’t enforce it until after the CDC lifts the moratorium.

That’s good news compared to being put out on the streets. But Bridge said renters often can’t find new apartments with an eviction judgment on their record. Plus, the court process can cost up to $200 in administrative fees — a tall order for workers already behind on rent.

“Our COVID-19 numbers are the worst they’ve ever been, we’re in the middle of a pandemic, and we’re three weeks away from people having nowhere to go,” Bridge said. 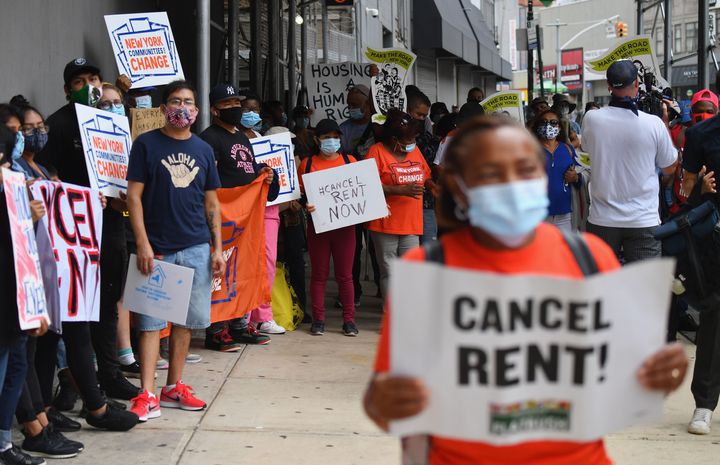 How an eviction crisis becomes a public health crisis

While evictions do indeed spike homelessness rates, Bridge said most people don’t end up sleeping on the streets. Most of them end up moving in with family and friends while they sort out their finances and look for a new apartment.

Under normal circumstances, this post-eviction “doubling up” would be a tragedy. During the coronavirus pandemic, it has become a significant health risk. According to a modeling study published in November, members of households that moved in together due to an eviction had a 40% higher risk of contracting COVID-19. Low-income workers already live in smaller homes than wealthy workers; each extra person moving into a crowded household makes it harder to maintain social distance and avoid respiratory droplets.

These arrangements are also often a step along the path into homelessness, another significant risk factor for contracting COVID-19.

“Once someone ends up in the shelter system, it gets a lot harder to socially distance and quarantine,” Yentel said.

Even with the moratorium in place, this spiral is already playing out for low-income Americans. One of Bridge’s clients is a restaurant server who couldn’t handle the stress of being threatened with eviction and decided to move herself and her children into her sister’s home. Others have had to miss work to take care of older family members with COVID-19 — a situation that threatens their income and their health alike.

Contact tracing studies earlier in the pandemic found that roughly 45% of new infections came from people living in the same household.

And these impacts don’t just affect renters. Poor tenants are more likely to be essential workers, take public transportation and rely on food banks. These activities put them in contact with other people and risk extending the chain of coronavirus infection — and fueling even more evictions.

“We’re starting to understand the relationship between evictions and health as cyclical,” Leifheit said. “Evictions lead to poor health, but poor health also leads to evictions.” 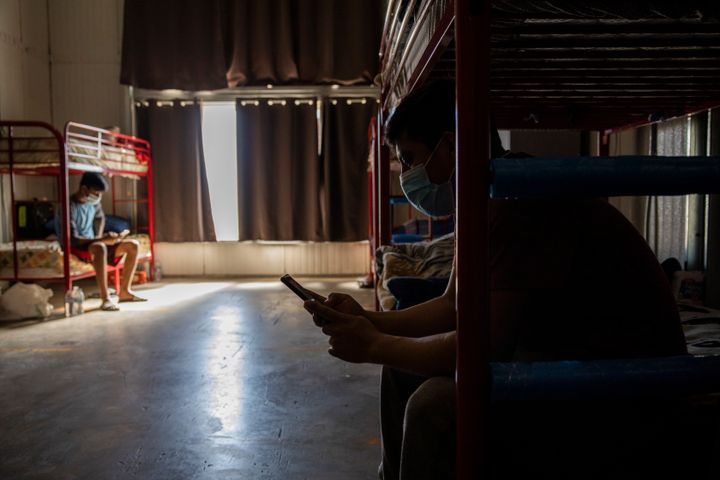 Rent relief is a no-brainer

The only good news about the eviction crisis is that it can be prevented with a relatively straightforward fix: rental assistance.

“It’s kind of maddening because of how simple it is,” Yentel said. In June, the Urban Institute estimated the cost of providing relief to every rent-burdened household in America at $15.5 billion per month. The latest bipartisan stimulus proposal includes $25 billion in rental assistance — “It’s not enough but it’s a step in the right direction,” Yentel said — but the fate of the proposal remains unclear.

Rent relief is a rare political no-brainer. Tenants (who want to pay their rents) and landlords (who want rental income) alike support it. It’s also a bargain: An eviction-driven homelessness crisis could cost up to $129 billion in extra spending for emergency shelters, medical care and other services, far more than the price tag for preventing it in the first place, according to an NLIHC analysis. And even that astronomical figure doesn’t include the second- and third-order effects of cities across the country experiencing a crash in home and rental prices as vacancy rates explode.

“It’s extraordinarily shortsighted and cruel to allow this many evictions to occur,” Yentel said. “This was entirely predictable. And the solutions are simple even if they’re not easy.”

Related posts:
Hot News
World’s Richest Shake Off Crisis in Record Setback for Equality
HSBC chief can’t stay silent as China’s crimes are exposed
A West Virginia City’s Rising Fortunes Widen the Political Divide
Kuaishou Seeks to Raise Up to $5.4 Billion in Hong Kong IPO
China's economy grows 2.3% in 2020
allied health math
Hemp’s (Maybe) Legal High Offers Growing Allure: Cannabis Weekly
Recent Posts
This website uses cookies to improve your user experience and to provide you with advertisements that are relevant to your interests. By continuing to browse the site you are agreeing to our use of cookies.Ok