Ground handlers at two contractors used by major airlines such as Emirates, Qantas and Virgin have secured better working conditions after months of negotiations.

Unionised workers at Menzies and Dnata Catering have been angling for higher wages and paid overtime for months, following a torrid two years for the Australian aviation sector that’s decimated employee morale, productivity and profits. 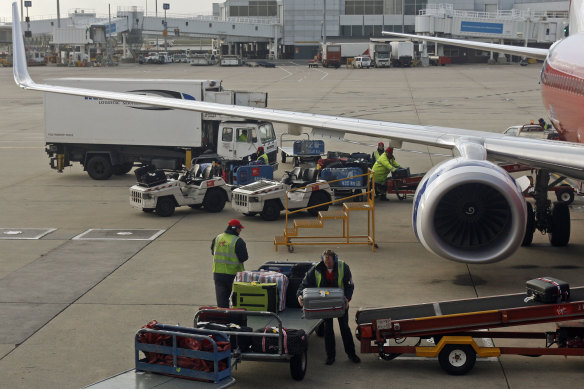 Workers at Dnata Catering and Menzies have secured improved pay and working conditions after months of negotiations.Credit:Paul Rovere

Kuwait-based Menzies will provide Australian employees an 11 per cent pay rise effective immediately, and has committed to bringing all operations that have been outsourced to labour hire firms back in-house to be done by its own workers. Menzies’ staff had been considering moving to a protected action ballot if their demands hadn’t been met.

Emirates-owned Dnata has agreed to provide Australian Dnata Catering employees a 7.5 and 8 per cent pay increase over two years, back-paid to January 2022 when flying resumed after the pandemic.

The agreement follows a settlement with Dnata’s ground handlers last week delivering them a 17 per cent pay rise over a four-year period, securing overtime entitlements and increasing opportunities for part-time employees to convert to full-time roles and casuals to permanent positions. The agreement led the employees to call of a protected strike action that would have disrupted major airports including Sydney and Melbourne.

The aviation sector has been marred by operational issues on multiple fronts since coming out of COVID-19 lockdowns and encountering record demand for travel, limited capacity and the soaring cost of fuel. Staff shortages, affected morale and brewing industrial action have exacerbated the logistical challenges after the pandemic.

Swissport, another ground handling organisation used by all Australian airlines at multiple airports including Sydney and Melbourne Airport, will begin negotiations for better employment conditions in December.

Transport Workers Union national secretary Michael Kaine said the improvements would make a “huge difference to workers who’ve been under immense financial pressure, especially for Dnata Catering workers who were denied JobKeeper [payments] during the pandemic.”

“These workers have ensured their job security and a fair pay rise because they stood together, but the industry is not going to recover to where it needs to be without the federal government stepping in. It must introduce a Safe and Secure Skies Commission that will lift standards both for workers and the travelling public, and cap executives’ obscene salaries.”