Biden 'disappointed' in GOP governors who plan to resist vaccine mandate: 'Have at it'

President Biden said he’s “disappointed” in the Republican governors who plan to resist his vaccine mandate and are threatening legal action.

“I am so disappointed,” Biden said Friday during a visit to the Brookland Middle School after he told a reporter to “have at it” regarding a question about Republicans who have pushed back on his six-point coronavirus plan. “Particularly, some Republican governors have been so cavalier, with the health of these kids. So cavalier with the health of our communities.

“We got to come together. I think the vast majority, look at the polling data. The vast majority of the American people know we have to do these. They’re hard but necessary, we’re gonna get them done. Thank you,” Biden, who was joined by first lady Jill Biden and Education Secretary Miguel Cardona, and D.C. Mayor Muriel Bowser, concluded at the event. 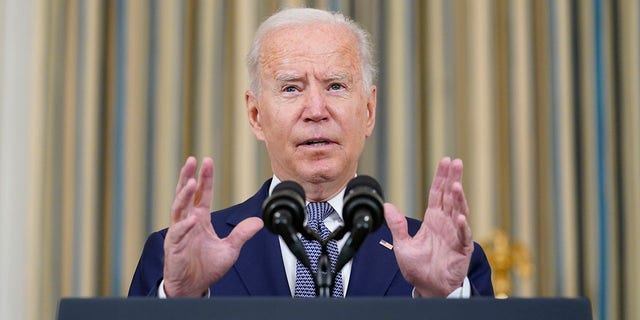 The visit comes after Biden ordered a sweeping mandate on Thursday requiring all employers with more than 100 employees to be vaccinated or submit to weekly testing. The mandate affects about 80 million Americans. About 17 million workers at health facilities who receive federal Medicare or Medicaid will also be required to get vaccinated.

“We’ve been patient. But our patience is wearing thin, and your refusal has cost all of us,” Biden said in remarks Thursday, adding that the unvaccinated, “can cause a lot of damage, and they are.”

Republicans across the country, however, have already slammed the sweeping new rules as “unconstitutional” and red states are gearing up for legal battles.

“The American Dream has turned into a nightmare under President Biden and the radical Democrats,” Republican South Carolina Gov. Henry McMaster said on Twitter in response to the mandate. “They have declared war against capitalism, thumbed their noses at the Constitution, and empowered our enemies abroad.”

“Rest assured, we will fight them to the gates of hell to protect the liberty and livelihood of every South Carolinian,” he added.

While Texas Gov. Greg Abbott tweeted Thursday evening: “Biden’s vaccine mandate is an assault on private businesses. I issued an Executive Order protecting Texans’ right to choose whether they get the COVID vaccine & added it to the special session agenda. Texas is already working to halt this power grab.”

Republican governors aren’t alone in their fight against the mandate, with the Republican National Committee also vowing to sue.

“Joe Biden told Americans when he was elected that he would not impose vaccine mandates. He lied. Now small businesses, workers, and families across the country will pay the price,” RNC chair Ronna McDaniel said.

“Like many Americans, I am pro-vaccine and anti-mandate,” she said. “Many small businesses and workers do not have the money or legal resources to fight Biden’s unconstitutional actions and authoritarian decrees, but when his decree goes into effect, the RNC will sue the administration to protect Americans and their liberties.”