Biden not named in US bishops' document on receiving Communion

The U.S. Conference of Catholic Bishops did not mention President Biden by name in a document they passed Wednesday regarding Communion.

Following calls to deny Communion to Biden, who is Catholic, because of his public position on abortion, the bishops instead used much more general language in a document on the Eucharist.

“Lay people who exercise some form of public authority have a special responsibility to embody Church teaching in their service to the common good,” the document said, staying away from direct references to abortion, Biden or any other individual officials. 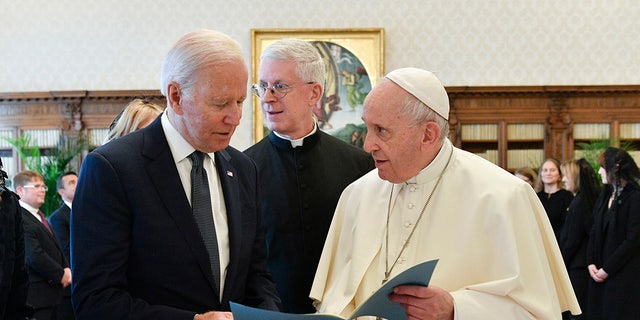 President Biden exchanges gifts with Pope Francis as they meet at the Vatican on Oct. 29, 2021.
(Vatican Media via AP)

The document was passed at the USCCB’s Fall General Assembly, taking place this week in Baltimore.

In June, the document was expected to include a specific admonition to Catholic politicians and other public figures who disobey church teaching on abortion and other core doctrinal issues.

Biden, who attends Mass regularly, says he personally opposes abortion but doesn’t think he should impose that position on Americans who feel otherwise. He’s taken several executive actions during his presidency that were hailed by abortion rights advocates. 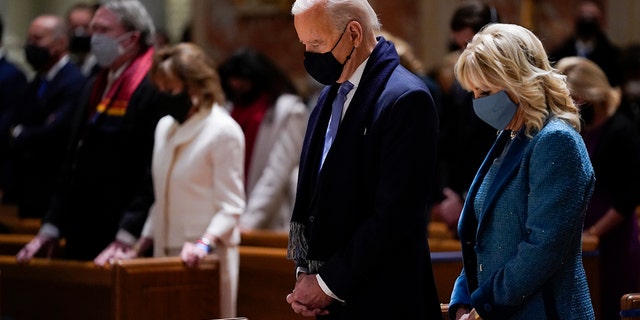 Joe and Jill Biden attend Mass at the Cathedral of St. Matthew the Apostle during Inauguration Day ceremonies on Jan. 20, 2021, in Washington. (AP Photo/Evan Vucci, File)

Following a meeting with the pope in late October, Biden reported that the pope said he should continue to receive Communion.

The president said the pope blessed his rosary, and added that they discussed fighting climate change as part of his Build Back Better agenda.

“We just talked about the fact that he was happy I’m a good Catholic,” Biden said. “And I should keep receiving Communion.” 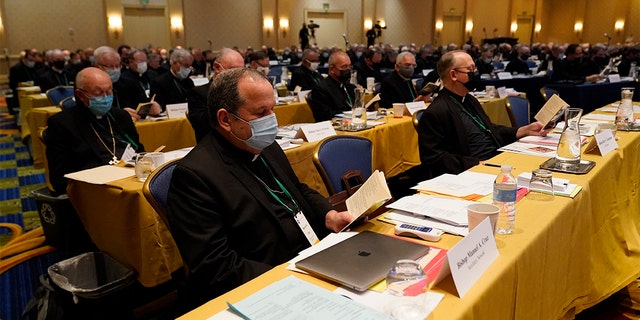 Bishop Manuel Cruz, front left, of the Archdiocese of Newark, New Jersey, during a morning prayer at the Fall General Assembly of the U.S. Conference of Catholic Bishops, Wednesday, Nov. 17, 2021, in Baltimore.
(AP Photo/Julio Cortez)

Biden said the pope did not give him Communion during the meeting.