President Biden and First Lady Jill Biden on Saturday announced the death of Champ, one of their two German shepherds, describing him as a “cherished companion” and a “sweet, good boy.”

“Our hearts are heavy today as we let you all know that our beloved German Shepherd, Champ, passed away peacefully at home,” the Bidens said in a statement.  “He was our constant, cherished companion during the last 13 years and was adored by the entire Biden family.”

Biden brought two dogs, Champ and Major, to the White House this year. Champ has been living with the Bidens since 2008 and was reportedly named by the president’s granddaughters. Major was adopted in 2018 and is the first rescue dog to live in the White House.

Both dogs returned to the White House in March after being sent to the family home in Wilmington, Delaware, for what the White House described as a pre-planned trip. That came after reports that Major bit a member of the White House security team and had been barking and lunging at other staffers. There had been no reports of bad behavior from the older Champ. 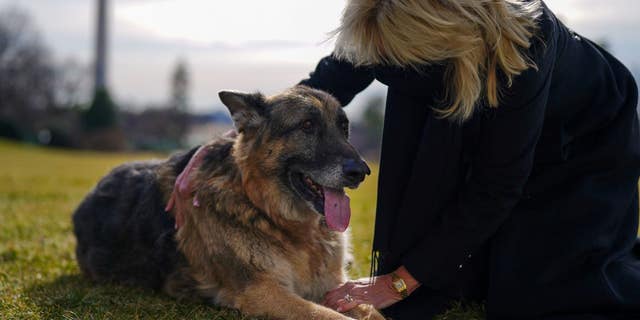 Champ has been with the Biden’s since 2008, while Major was rescued in 2018. (Adam Schultz/Official White House)

In their statement, the Bidens described how, even as Champ grew weaker in recent months, he would pull himself up when they entered a room, “his tail always wagging, and nuzzle us for an ear scratch or a belly rub.”

“Wherever we were, he wanted to be, and everything was instantly better when he was next to us,” they said. “He loved nothing more than curling up at our feet in front of a fire at the end of the day, joining us as a comforting presence in meetings, or sunning himself in the White House garden.”

Previously they said, he loved racing to catch their grandchildren as they ran around their backyard in Delaware, and chasing golf balls on the front lawn of the Naval Observatory.

“In our most joyful moments and in our most grief-stricken days, he was there with us, sensitive to our every unspoken feeling and emotion,” they said. “We love our sweet, good boy and will miss him always.”