Big miners confident coronavirus effects can be contained. But what if they aren’t?

The bumper results from BHP and Fortescue this week might suggest the good times are back for the big miners. Unfortunately, there is a big caveat next to any assumption that the buoyant earnings they generated in their first halves will continue through the rest of the financial year and beyond.

It’s an obvious qualification. The 39 per cent increase in BHP’s earnings and the spectacular 281 per cent leap in Fortescue’s in the December half were generated before the emergence of the coronavirus in China.

From the middle of last month commodity prices have been impacted by the quarantining of the Hubei province, the widespread closures of factories and lockdowns of cities across China and the restrictions on travel. 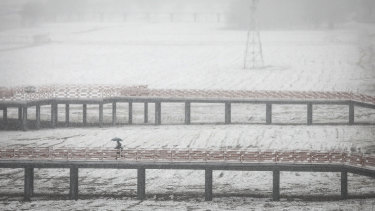 A man walks in a park in Wuhan. Australia’s big miners are counting on the widespread effects of the virus will be over by the March quarter.Credit:Getty

The oil price is down about 12 per cent, iron ore 5 per cent, copper about 7 per cent, nickel more than 5 per cent and thermal coal 2 per cent from their levels in mid-January.

The big miners and many analysts are working on the assumption the epidemic will be brought under control over the next five or six weeks – within the March quarter – and that activity will then bounce back sharply.

Across China people are returning to work. If China’s assessment is accurate, about 160 million should have returned to work by now, although something akin to that number are thought to be still experiencing restrictions on their ability to travel outside their homes.

The miners’ thesis is that first-quarter economic growth in China will be hit hard by the virus. That slump will be reflected in severe disruption to global supply chains and in delays and deferrals of orders of raw materials by Chinese customers, with isolated instances where customers have invoked 'force majeure' to avoid penalties.

If the virus can be contained by the end of next month, however, there is an expectation of a very sharp rebound and a spike in demand for commodities – and in their prices – as China’s steel mills and factories go into over-drive to make up for the lost production.

With the Chinese authorities loosening monetary policy and expected to take further actions to stimulate the economy it is conceivable that a post-virus growth spurt could more than counter the negative impact of the epidemic – provided that impact is short-lived. 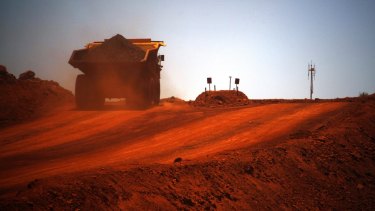 BHP and Fortescue have reported booming December half results. But that was before the coronavirus emerged.Credit:Reuters

The easing of the trade tensions with the US after the two companies reached their phase one agreement to halt hostilities earlier this year will help, although it should be noted that, while the US lowered the tariffs on some of China’s exports to the US, most of China’s exports are still covered by tariffs.

China has also made a number of commitments to buy $US200 billion ($300 billion) more US goods (including a big increase in agricultural products) over the next two years than it did in 2017. Its capacity to deliver on that commitment was questioned from the outset and the impact of the virus on its economy will only deepen the scepticism.

There are some "get out" clauses in the trade truce, including market conditions and the ability to source elsewhere if US producers aren’t competitive.

If the virus isn’t contained within the next couple of months and there were a renewal of the trade tensions, the impact on China’s economy and its demand for raw materials could be quite severe.

With or without renewed trade tensions, the flow-on effects of the virus within China and in the region will have an impact on global growth that was already going to be muted to some degree by the slowing of China’s growth rate as a result of the trade war. The International Monetary Fund has estimated the trade conflict would shave about 0.8 per cent from global growth this year.

China was already going to struggle to hold its growth rate around last year’s 6.1 per cent – its weakest in nearly three decades – and, given that it is the single-biggest contributor to global growth, accounting for nearly 30 per cent of that growth in recent years, any further slowdown in China will slow global growth even more.

The restrictions on travel between China and the rest of the world have effects well beyond the tourism sector.  China’s pivotal role within global supply chains means the economic impacts aren’t confined within China, as our education, travel and leisure sectors and companies that source components from China such as Apple and carmakers around the world have discovered.

The miners, who have access to on-the-ground intelligence, might be right in their assessment that the economic impacts of the virus will be relatively short-lived, with the epidemic contained by the end of the March and the economic damage swiftly remedied by a stimulus-accelerated torrent of catch-up activity by China’s industries.

Let’s hope so, but given the volatile and rubbery nature of the data China has been releasing on the spread of the virus, however, it is difficult to predict anything with confidence, including how lengthy and deep the direct and indirect effects of the virus might be.