Big News: Kansas Has Officially Voted to Protect Abortion in Its State Constitution

Big news: There has been a major win during this post-Roe era in the United States, because Kansas residents have voted to protect the right to an abortion in their state’s constitution.

In the state’s primary election this week, an amendment to the constitution was proposed that would essentially give state legislators the ability to place serious restrictions on the medical procedure—with the potential to outlaw it entirely. The majority voted “no” to the amendment, sending a clear message on where they stand.

According to The Kansas City Star, “The vote “no” campaign led 59 percent to 41 percent after all precincts in the state had reported.” Kansas—which tends to veer conservative in elections—saw votes to refuse the amendment across party and demographic lines, and the majority vote came from both urban and rural counties alike. Since the amendment did not pass, abortion remains legal in Kansas through 22 weeks of pregnancy. 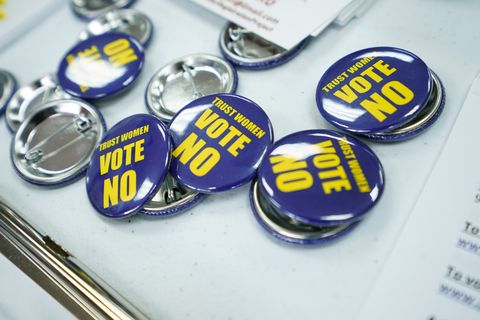 But what makes this win an even bigger deal is that it doesn’t just impact Kansas. The vote came three months before the state’s midterm elections and is especially important given Kansas’s location—mostly all of its neighboring states, like Oklahoma and Missouri, have already outlawed abortion, so the Kansas vote keeps abortion accessible to folks outside of Kansas’s limits, too. (Kansas has been a go-to destination for nearby out-of-state patients seeking an abortion. In 2021, the number of out-of-state patients who received an abortion in Kansas was nearly the same as in-state residents who got the procedure.)

In what has felt like a hopeless time since the Supreme Court overturned Roe v. Wade, this news is certainly a bright spot! If you want to keep the momentum going in the fight for reproductive justice, check out the below abortion funds that could use your donations: