Growth in rents from e-commerce customers lining up for big sheds is comfortably outstripping the rising costs of land and steel used to make them, and is supercharging earnings for global industrial developer Goodman Group.

The rising tide of rents fuelled by strong occupancy from booming e-commerce customers has enabled Goodman, which builds and owns large-scale warehouses around the globe, to substantially lift its full-year guidance. 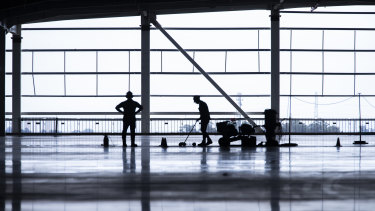 “This is a rather material upgrade given we’re only through the first quarter of the [financial] year,” they said.

“Structural changes have accelerated the way we shop and live .. consequently customer demand for high-quality locations close to consumers has never been greater.”

In a September quarter update, the $44.2 billion ASX-listed developer lifted its earnings growth to 15 per cent, up from the 10 per cent it forecast in August, prompting a 6.3 per cent spike in its midday share price as investors reacted to the upbeat news.

Mr Goodman estimates construction and land costs are up about 10 per cent across the group’s global operations, but rents, occupancy and shed values are running well ahead.

While costs increased up to $300 million across the board, “the end product and the rents have probably doubled that,” he said.

“The real strength in customer demand in those city locations around the world is really dynamic, and it is more than offsetting the growth in cost of construction and also of land,” he said.

“It’s being absorbed pretty comfortably at the moment. We expect those costs to primarily settle down over time.”

Disruptions from the global pandemic are having less impact than expected on the developer’s full-year projections, although Mr Goodman said he was keeping a watchful eye on winter’s onset in the United States and Europe, key markets for the group.

The company singled out the US, Europe and Japan as growth drivers.

“In those markets, there’s just more demand than there is supply and it’s very, very strong,” Mr Goodman said.

Last year, the group booked about $5.3 billion in valuation gains.

“This year, we’ll have over $5 billion as we roll through to June with a substantial amount of that coming through in December.”

Most of its sheds, many of them multi-storey, are fully tenanted.

Occupancy across the group’s portfolio is 98.4 per cent with 4.2 million square metres leased over the year to September, equating to a rental boost of $563 million.

Development work in progress has jumped to $12.7 billion, an increase of 19 per cent since June. About 60 per cent of the sheds under construction are now double storey and all are located in prime global city gateways.

“Structural changes have accelerated the way we shop and live … consequently customer demand for high-quality locations close to consumers has never been greater,” Mr Goodman said.

This demand drove Goodman’s 12-month rolling like-for-like earnings growth up by 3.2 per cent.

By mid next year, the group expects to have about $70 billion of assets under management, far stronger than the $65 billion it indicated in its August results.