The now-ubiquitous Patagonia vest with a company logo is the classic corporate gift in the world of tech and finance, but in 2020, over 1,000 companies sent their remote workers gifts through Snappy Gifts, an enterprise gifting platform.

Based in San Francisco, Snappy has been able to lure in some of tech's biggest names as customers, including Salesforce, Uber, and Microsoft.

"Given the general feel of 2020, employees were pleasantly surprised and were gracious of a gift. The best part, it allowed the option of personally selecting a gift that suits them best," said Shilpa Chamoli, onboarding coordinator at Microsoft who used Snappy to send holiday gifts to employees in 2020.

The business model is simple: Enterprise customers log onto the app, choose a price range, and select from a curated collection of gifts. (Some of the most popular items this holiday season were air fryers, Amazon Fire tablets, and projectors.)

After the gift is selected, the recipient receives a virtual scratch card. Once the gift is "revealed," it can be accepted or swapped. The gift-giver is then notified to pay, and Snappy handles the shipment.

With Snappy, gift recipients can get exactly what they want, and companies can avoid sending generic gifts that will likely be unused or returned. "There's actually a national returns day where $100 billion worth of merchandise goes wasted," Hani Goldstein, CEO of Snappy, said in reference to January 2, the busiest day of the year for holiday returns in the US, according to UPS.

The pandemic has also helped propel the business forward. Snappy's gift platform grew over 600% from 2019 to 2020 as companies come up with creative ways to commemorate employee milestones like anniversaries and promotions. In previous years, Snappy's average growth rate was closer to 400%.

Celebrations that normally happen in an office are not happening anymore, Goldstein said, and with employees all over the place working remotely, it's an "insane process" to collect home addresses for an entire team at a large company like Microsoft or Salesforce.

"I couldn't have thought of a better way to show our gratitude to every individual residing in different regions all over the world," said Stephanie Yaplee, an executive assistant at Salesforce.

Goldstein, 35, is an unconventional founder by Silicon Valley standards. She's a trained lawyer who previously worked for the Israeli Department of Justice, representing the state in criminal and security cases. In 2015, she packed up her life and bought a one way ticket to San Francisco to become a first-time founder with no prior contacts or relationships in Silicon Valley. Her co-founder, Dvir Cohen, is also from Isreal.

In an interview with Business Insider, she describes her first six months as an entrepreneur sleeping in cheap hotel rooms and meeting strangers at tech meetup events to grow her network. "I honestly didn't know anyone in all of California, but I figured there are some people that do these kinds of things here and I can learn something from them," she said.

At those meetups, she would share early mockups of her startup idea to whomever was willing to listen. The plan worked. Goldstein has been able to raise a total of $35 million in just five years.

Snappy's most recent, $25 million funding round closed in June 2020 but was not previously announced until now. That Series B round was led by Saban Ventures with participation from existing investors 83North, Hearst Ventures, and GGV. Its previous round of funding closed in October 2018.

Here are some of the early mockup slides Goldstein used to raise money for Snappy Gifts:

These are the first mockups of the Snappy app

And how it's changed over the years. 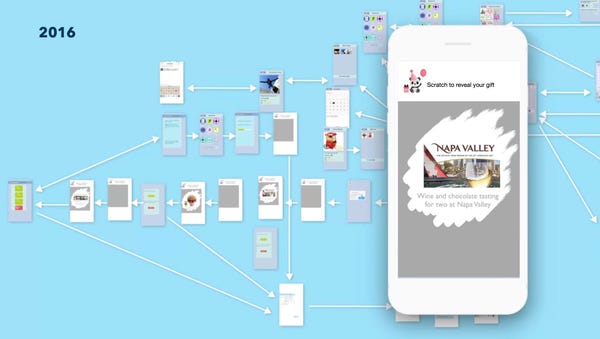 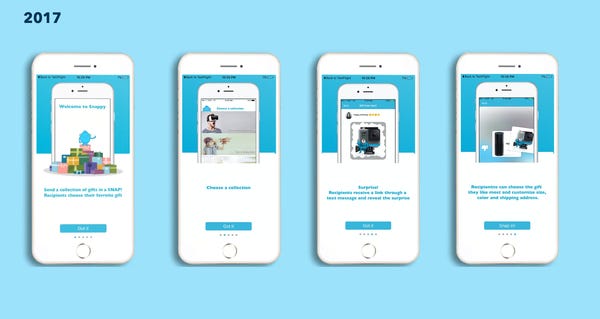 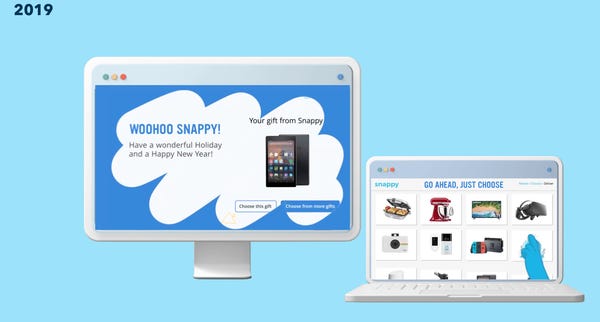