The head of online furniture seller Temple & Webster has said the worst of the supply chain crunch appears to be over and Australians are feeling more optimistic about going shopping as the Omicron COVID-19 wave begins to subside.

Mark Coulter, Temple & Webster’s chief executive, told The Sydney Morning Herald and The Age that shipping delays – both domestically and internationally – had started to improve through the start of the new year. 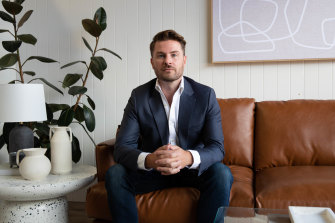 “Things have definitely started to improve,” he said. “We feel good about our stock position, and the local transport and logistics industries are in a better position than they were.

“I think Australians are probably a bit more optimistic about the future given Omicron hasn’t been as bad as we were expecting. With borders opening up and the world looking a bit more normal, I think you’ll actually see a surge in economic activity.”

However, like many other retailers, Temple & Webster was not exempt from the shipping strains and lockdown pressures of the first half of the financial year. On Wednesday, the company told investors its earnings had plunged 40 per cent for the six months to the end of December.

Net profit after tax declined 40.2 per cent to $7.2 million. On a pre-tax basis, which wipes out the impact of favourable deferred tax assets in the years prior, earnings slid 26.8 per cent to $10.6 million.

The company said there were myriad reasons behind the drop, including increased spending on marketing, weaker margins due to higher shipping costs and disruptions, and higher spending on future growth prospects.

Higher costs were incurred on consultants, growing over 200 per cent to $2.3 million for the half, which Mr Coulter said was key to the business’ growth plans and expansion into new areas.

Despite the earnings fall, revenue continued to boom, growing 46 per cent over the half to $235.4 million, as the company continued to add more active customers during the pandemic, coming in at just over 900,000. Mr Coulter said he believed there was still plenty of room for growth in the local furniture market, which has an online penetration of just 10 per cent.

“There’ll be periods where growth moderates and growth accelerates, but over the long term we still have a lot of growth left,” he said. 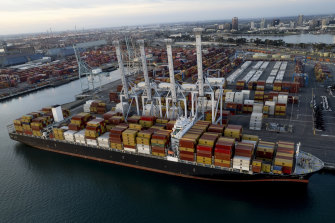 Shipping delays have caused headaches for retailers around the globe.Credit:Getty

The earnings slide marks an end to the company’s multi-year track record of increasing profits, and the company warned it would likely wear even more costs in the current half. However, analysts were unfazed, lauding the significant revenue growth and sending the company’s shares up 11 per cent to $8.95.

Jarden analyst Wassim Kisirwani told clients the company’s results had beaten expectations for both revenue and earnings and was outperforming the rest of the market where online growth appears to have moderated.

Analysts were also bullish on the company’s outlook, with Temple & Webster showing that sales have continued to grow through January, up 26 per cent.

The company did not declare a dividend, and Mr Coulter reiterated that he was not considering introducing a dividend, instead opting to reinvest for growth.

“When we get to the point where we can’t find a good use of shareholder money to deliver the right [return], then, of course, we will consider returning that money by way of dividend,” he said. “But we still see lots of growth ahead of us.”