DESIGNS for a breathing mask that apparently allows wearers to unlock their mobiles while shielding themselves from deadly viruses have surfaced online.

The bizarre gear will strap over your nose and mouth and feature an image of the lower half of your face so it can "work with facial recognition software". 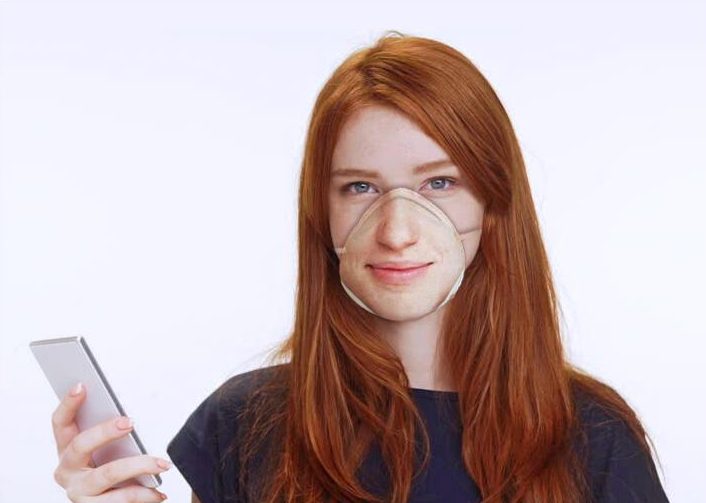 Sales of medical masks have gone through the roof in recent weeks is response to the coronavirus outbreak, which has so far killed more than 1,700 people with 71,000 cases globally.

The masks supposedly protect users by blocking infectious particles but there are doubts over how effective they are.

One issue facing mask wearers is that they render facial recognition software on smartphones – such as Apple's Face ID – useless.

The technology typically scans minute details of your face, including the measurements of your mouth or nose, to verify your identity before unlocking your phone. 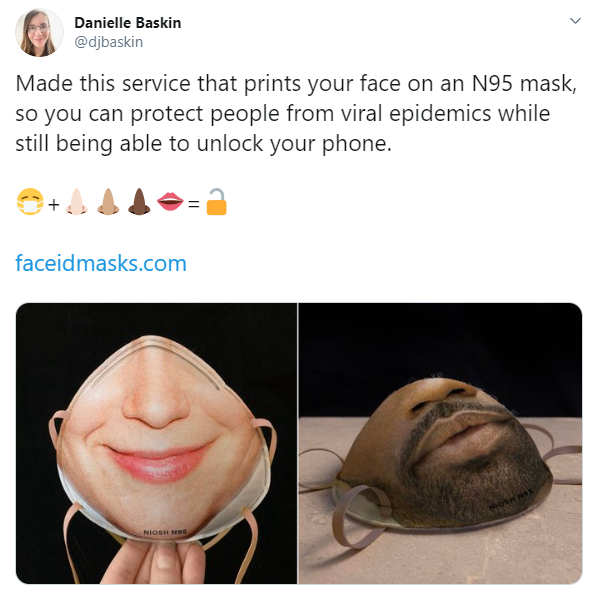 Now a San Francisco-based designer claims to have found a way around the issue with a new mask that "looks just like you".

Danielle Baskin, a "product designer and visual artist", according to her website, said her service slaps the images onto masks with an "N95" filtration rating – kit typically worn by hospital staff.

"Made this service that prints your face on an N95 mask," she wrote on Twitter on Saturday.

"You can protect people from viral epidemics while still being able to unlock your phone." 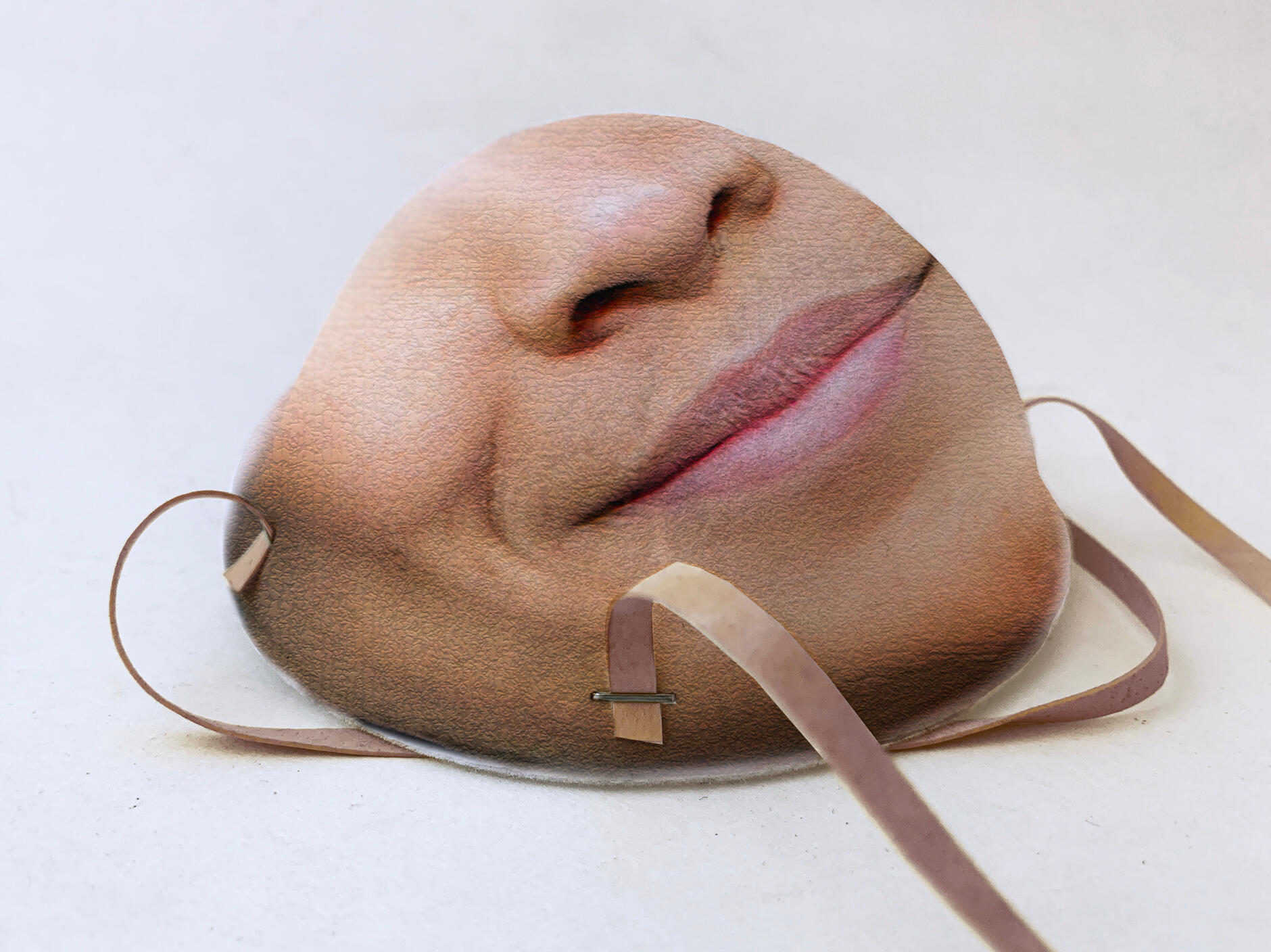 Danielle included a link to a website that explains more about the product, which isn't available to buy yet.

Customers are encouraged to upload a pictures of their face to the site before the process begins.

"After uploading your face, we use computational mapping to convert your facial features into an image printed onto the surface of N95 surgical masks," the website states.

"You can use your mask for everyday life as a barrier for airborne particle droplets." 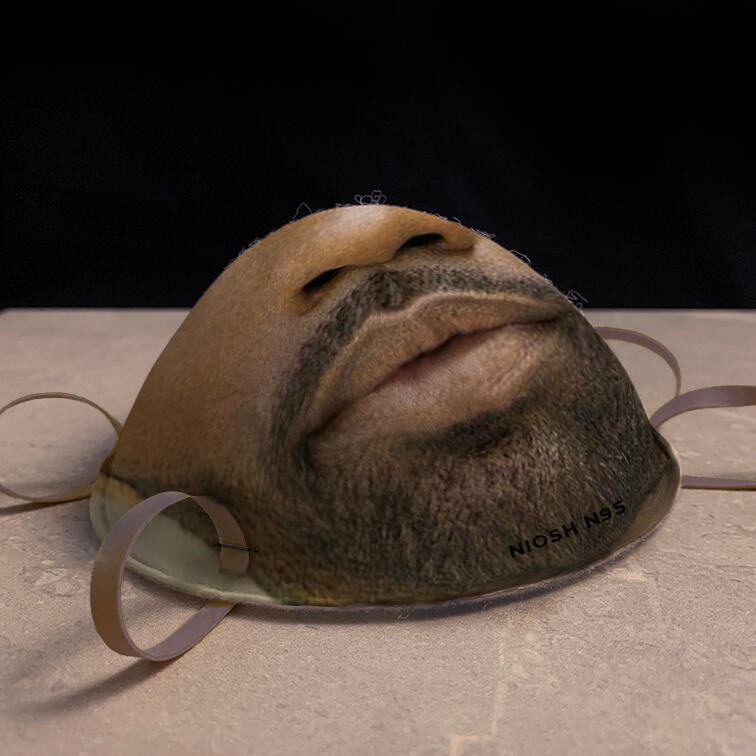 It's not yet clear if the website is a stunt.

A section on the page addresses whether or not the whole thing is a jokes, stating: "Yes. No. We're not sure. Viruses are not a joke."

It's not clear when, or where, they'll hit shelves. The website states they won't go on sale "while there's still a global mask shortage".

On Twitter, Danielle said: "To all those inquiring: No, I don't have plans to produce these *during* the global mask shortage. There's a waitlist and no launch date."

Recent demand for medical masks has sparked nationwide shortages in China and beyond as panicked residents flock to pharmacies.

There are also doubts over whether the masks would even fool your phone's facial recognition scanners.

Technology like Apple's Face ID scans the depth of your facial features, which the flat material of a mask cannot replicate.

Where did coronavirus start? From bats to snakes – the theories on deadly virus' origins

The killer coronavirus was spread from bats to snakes to humans, experts have claimed.

An outbreak of the virus is understood to have started at an open air fish market in the Chinese city of Wuhan – which has since been put in lockdown after 25 people died and more than 600 people were infected globally.

A new study published in the China Science Bulletin this week claimed that the new coronavirus shared a strain of virus found in bats.

Previous deadly outbreaks of SARS and Ebola were also believed to have originated in the flying mammal.

Experts had thought the new virus wasn't capable of causing an epidemic as serious as those outbreaks because its genes were different.

But this latest research appeared to prove otherwise – as scientists scrabble to produce a vaccine.

In a statement, the researchers said: “The Wuhan coronavirus’ natural host could be bats … but between bats and humans there may be an unknown intermediate."

Meanwhile, scientists at Peking University also claim that the deadly virus was passed to humans from bats – but say it was through a mutation in snakes.

The researchers said that the new strain is made up of a combination of one that affects bats and another unknown coronavirus.

They believe that combined genetic material from both bats and this unknown strain picked up a protein that allows viruses bind to certain host cells – including those of humans.

After analysing the genes of the strains the team found that snakes were susceptible to the most similar version of the coronavirus.

It meant that they likely provided a "reservoir" for the viral strain to grow stronger and replicate.

Snakes are sold at the Huanan Seafood Market in central Wuhan and may have jumped to other animals before passing to humans, they claim.

But a senior researcher at the Wuhan Institute of Virology, who asked not to be named, said the findings should be treated with caution.

He told the South China Morning Post: “It is based on calculation by a computer model.

“Whether it will match what happens in real life is inconclusive.

“The binding protein is important, but it is just one of the many things under investigation. There may be other proteins involved.”

The expert believes that the new strain was an RNA virus, meaning that its mutation speed was 100 times faster than that of a DNA virus such as smallpox.

On Twitter, Danielle added: "I'm testing the facial recognition reliability across devices. But what if you just want to be recognised by your friends?"

Described by the World Health Organisation (WHO) as "public enemy number one", Coronavirus, now known as 2019-nCoV, is rapidly spreading across the globe.

If you are healthy, you only need to wear a mask if you are taking care of a person with suspected coronavirus infection, according to WHO.

Masks are only effective when used in combination with frequent hand-cleaning with alcohol-based hand rub or soap and water.

In other news, the new Xbox and PlayStation consoles could be delayed as the coronavirus shuts down factories across China.

A recent spate of despicable scam emails warning of a coronavirus threat in your local area are actually a ploy to hijack your gadgets.

We recently revealed how the next iPhone could face delays due to the Wuhan coronavirus crisis.

What do you think of the new masks? Let us know in the comments!