Billionaire Michael Bloomberg tied his late entry to the Democratic presidential primary in large part to his reputation as a deep-pocketed philanthropist who supports environmental groups seeking to curb climate change.

Yet at his first debate as a 2020 presidential candidate on Wednesday night, the former New York City mayor defended fossil fuels and pitched what’s widely considered the lowest baseline for any federal response to global warming.

“If you’re president, the first thing you do the first day is rejoin the Paris Agreement,” Bloomberg said.

Bloomberg, the world’s eighth richest man, took credit for the closure of hundreds of coal-fired plants in recent years, a nod to the hundreds of millions of dollars he has spent on climate causes. In 2017 alone, he gave the Sierra Club $64 million to fund its Beyond Coal campaign. Last year, he took the effort in house, budgeting $500 million for his own Beyond Carbon initiative.

Yet data from the U.S. Energy Information Administration shows the primary driver of coal plant closures is higher operating costs, as well as the proliferation of cheap fracked gas and, increasingly, solar and wind energy. The data prompted Associated Press fact-checkers to label Bloomberg’s claim that he was “killing coal” false. And, despite the Beyond Carbon campaign’s focus on slowing the expansion of gas-fired plants, Bloomberg defended the fracking industry.

“It’s a transition fuel,” Bloomberg said. “We want to go to all renewables, but that’s still many years from now.”

The remarks came as peer-reviewed research published Wednesday in the journal Nature showed that surging concentrations of methane ― a gas that traps 84 times more heat over a 20 year period than carbon dioxide ― in the atmosphere are overwhelmingly from industry.

“It’s a technique,” Bloomberg said, calling for the “enforcement of rules” to lower emissions. “But we’re not going to get rid of fracking for a while.” 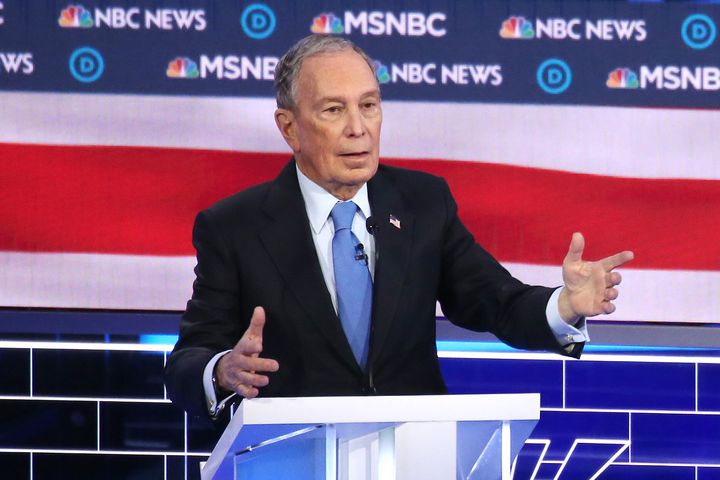 There was a stark contrast between the former Republican mayor and his progressive rivals Sens. Elizabeth Warren (D-Mass.) and Bernie Sanders (I-Vt.), who support banning the controversial drilling technique on public lands. Sanders, the Democratic front-runner and top-ranked candidate in environmental groups’ climate scorecards, proposed legislation this month that would start to phase out fracking across the country.

Sanders’ hard-line stance has drawn criticism from unions and some Democrats who warn that nominating a candidate who supports banning fracking threatens to cede gas-producing swing states like Pennsylvania to President Donald Trump, an unabashed champion of fossil fuels.

“This is an existential threat,” Sanders said. “This is a moral issue, my friends. We have to take responsibility of making sure that the planet we leave our children and grandchildren is a planet that is healthy and habitable.”

Warren went beyond the promise of generational fairness and criticized the moderators for failing to pose a question about environmental justice for minority and poor communities, which typically suffer from the worse exposure to industrial pollution.

“For generations now in this country, toxic waste dumps, polluting factories have been located in or near communities over and over and over. … We have to own up to our responsibility,” she said, adding that the next president must crack down on polluting industries’ corrupting influence on the policymaking process.

The more centrist candidates veered closer to Bloomberg. Sen. Amy Klobuchar (D-Minn.) also talked about the need for fracked gas as a “transitional fuel” but vowed to review existing drilling permits to determine what is safe. Former South Bend, Indiana, Mayor Pete Buttigieg made vague platitudes about the need to elect a president in 2020 who believes in climate science, but offered few specifics of his own. Former Vice President Joe Biden called for ending fossil fuel subsidies, but said he’d support prosecuting oil, gas and coal executives who funded climate misinformation campaigns ― a common refrain of Sanders’ campaign.

Biden ultimately pivoted to international diplomacy. He said the United States should rally the world behind an effort to lower emissions that goes beyond the nonbinding, and so far alarmingly ineffectual, Paris Agreement.

“On Day One, when I’m elected president, I’m going to invite all of the members of the Paris Accord to Washington, D.C.,” Biden said. “They make up 85% of the problem. They know me. I’m used to dealing with international relations. I will get them to up the ante in a big way.”

On this topic, Bloomberg had something new to say. The billionaire deflected blame from China, the world’s current largest emitter. Bloomberg recently defended the country’s authoritarian president and shielded its leaders from the scrutiny of the reporters he employed.

Bloomberg did, at one point, make a more impassioned call for action.

“The world is coming apart faster than any scientific study had predicted,” he said. “You’ve just got to do something now.”

Something, as some critics have argued, like spending the nearly $400 million Bloomberg has dumped into ads promoting his presidential campaign on races to oust climate obstructionists from Congress.