Coronavirus is the moment Silicon Valley's "preppers" have been waiting for. A sect of the technology industry's elite, led by PayPal billionaire Peter Thiel, have spent years preparing for the apocalypse with bunkers, secret retreats and action plans. Suffice to say, they are feeling vindicated.

"This is the exact type of situation they bought a bunker for," says Gary Lynch, of Rising S, a steel bunker maker that has several billionaire clients. 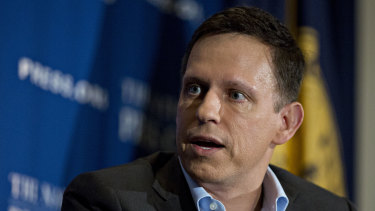 "A lot of my customers have wives or husbands who weren't on board, but I bet a lot of them were saying 'I told you so' last week".

Lynch's custom bunkers go from $US50,000 ($81,800) to $US8 million, depending on the level of comfort. Two in Japan and one in Venezuela are currently in use. He has shipped bunkers to New Zealand, where Thiel has set up the perfect doomsday shelter, but refuses to say if he is a client.

Yishan Wong, former Reddit chief executive, is building a self-sustaining anti-deforestation unit in Hawaii, where he will move to in a year. His California home already runs on a generator and he has medicine and food stockpiled "back when roughly half our friends thought coronavirus wasn't a big deal".

"One big segment that saw this coming (other than career epidemiologists) was technology people in Silicon Valley," Wong says. "They evaluate the world heavily through a mathematical and scientific lens. They live and die by it, because if they are wrong about some technical truth, they fail at their jobs and their firm goes bankrupt."

Wong was an early employee at Facebook, which this week told its workers to remain at home. Its Californian offices, much like those of Twitter, Apple and Google, which has shifted almost its entire 240,000 workforce, are eerily quiet.

There is a sense of serenity among the super rich who, after years of stocking up, are adopting the British motto: "keep calm and carry on".

"Truth is, I have not done anything extraordinary here beyond stocking up in non-perishable and perishable food, toilet paper, bottled water in case we go into lockdown for two to three weeks," says Marvin Liao, a former Yahoo executive and partner at 500 start-ups. "I've also cut back on any travel and going to places where lots of folks congregate and take all meetings over the phone or video call."

To Liao, who learnt archery to protect his wife and daughter, it is "just basic prepper stuff". He has two weeks worth of face masks and his wife is selling handmade Star Wars patterned cloth versions that are reusable and less frightening for children.

California's Vivos, a network of underground communities that accommodate more than 10,000, is seeing demand take off. "People are no longer inquiring on a curiosity point of view," a spokesman says. "But now ready to secure a space while they still can." Spots in a bunker can go for $US35,000 per person. Has society come around to the super elite survivalist way of thinking? Wong thinks not.

"I'm just hoping there isn't a stupid war that follows, as I have this climate change project I need to execute."