California’s overturned ban on high-capacity magazines could be reinstated on appeal after a federal court’s split-decision found it unconstitutional last year.

The Ninth U.S. Circuit Court of Appeals in California announced Thursday that an 11-member panel will rehear the case.

In Duncan v. Becerra, a three-judge panel in August ruled 2-1 that the ban on magazines that hold more than 10 rounds violated the Second Amendment right to bear arms.

California Attorney General Xavier Becerra, who would leave office if the Senate confirms him as the Biden administration’s health secretary, filed a petition shortly after the ruling, seeking review of the panel’s decision. He argued that it was “inconsistent with existing case law” and a threat to public safety. 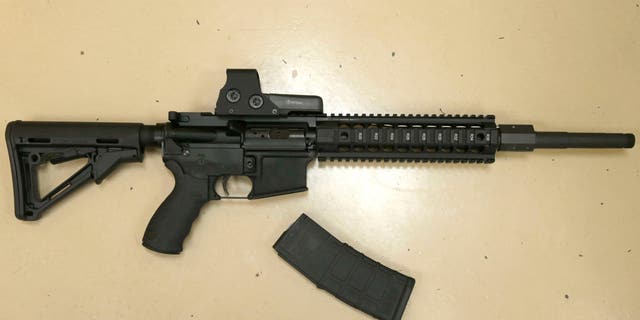 FILE – This Oct. 3, 2013, file photo shows a custom made semi-automatic hunting rifle with a detachable magazine, displayed at TDS Guns in Rocklin, Calif. A federal appeals court said Thursday, Feb. 25, 2021, that it will reconsider a three-judge court’s split ruling last year throwing out California’s ban on high-capacity ammunition magazines, a decision with potential impact in many other states. An 11-member panel of the 9th U.S. Circuit Court of Appeals will rehear the case after two members of the three-judge appellate panel ruled in August that California’s ban on magazines holding more than 10 bullets violates the U.S. Constitution’s protection of the right to bear firearms. (AP Photo/Rich Pedroncelli, File)

He cited a 2019 study at Columbia University that found mass shootings were more than three-times as deadly in states that allowed high-capacity magazines.

“Large-capacity magazines have been used in many horrific mass shootings around the country, including right here in California,” Becerra said in a statement. “That’s why today’s decision by the Ninth Circuit to rehear this case is critical; it is the next step in the defense of our state’s commonsense gun laws.”

The National Rifle Association, which had backed the lawsuit that overturned the ban, said the 9th Circuit’s decision was “not surprising.”

In an alert to its members Thursday, the NRA said it would continue to support Second Amendment cases.

The case could impact similar laws in other states.

The Ninth Circuit has had a left-leaning reputation for decades, but President Donald Trump appointed a number of conservative judges. One of the two judges who found the ban unconstitutional last August had been appointed by Trump a year prior.

But even if the Ninth Circuit overrules the decision to block the ban, the case could make its way to the Supreme Court – which now has a stronger conservative majority following Trump’s term in office.

California banned the manufacture, import sale or lending of large-capacity magazines in 2000, although people who already had them were grandfathered in and allowed to keep them.

The state made it illegal to purchase or receive them in 2013. And in 2016, a referendum also banned their possession.