Helen Coonan was preparing for another chaotic week when she received a phone call mid-afternoon on Sunday that would intensify the storm already swirling around casino giant Crown Resorts.

After months of searching, Crown’s executive chairman was ready to announce on Monday she had found a new chief executive to take the reins at the wounded James Packer-backed group: outgoing Lendlease boss Steve McCann. 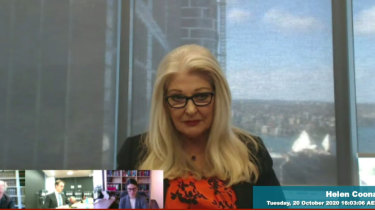 But that news would be bumped to second billing. The Mother’s Day phone call informed her that Crown’s arch rival, The Star, was about to propose a $12 billion merger to create what its boss Matt Bekier calls “the BHP of gaming and entertainment” in Australia.

A bidding war is now under way for Crown and its sprawling properties in Melbourne, Sydney and Perth. That adds to an already massive workload for the former Howard government minister Coonan as she tries to rebuild Crown’s management, board and reputation after last year’s Bergin Inquiry in NSW eviscerated all three.

Crown is still working towards opening the casino at its new Sydney tower after its licence was suspended when former supreme court judge Patricia Bergin confirmed – among other things – reports by this masthead that Crown had facilitated money laundering at its Melbourne and Perth casinos.

The Victorian government slapped it with a $1 million fine last month for failing to check its high-roller “junket” tour partners for criminal links, and that could pale in comparison to a potential penalty from the financial crimes watchdog AUSTRAC’s investigation into money laundering breaches.

Now Crown is preparing to be grilled again – simultaneously – at two royal commissions that will decide if it is fit to keep its Melbourne and Perth casino licences.

West Australia’s commission started public hearings this week and Victoria’s will kick off on Monday. There are questions about how many balls Coonan – who ended up running Crown as the last person standing after Bergin cut a swathe through the group – can keep in the air at once.

At least the future of Crown Sydney became clearer this week when NSW Independent Liquor and Gaming Authority chairman Philip Crawford said he was “confident” he would give Crown the all-clear to finally open the gaming rooms at the new $2.2 billion Barangaroo tower by the end of October. It was supposed to open in December last year.

Crawford – who was obliged by the sweetheart deal Crown signed with the NSW government in 2014 to work with Crown to try to restore its licence rather than just take it away – said he was “amazed” by what Coonan has achieved in the past four months by installing new people, systems and a new culture in the company.

“I didn’t know in February, whether they would [get the licence back] … the old management, I reckon, wanted to fight,” he told a press conference.

But even as the regulatory storm in NSW is easing, royal commission clouds are gathering in Victoria and WA. In Victoria, respected former judge Ray Finkelstein was given a tight timeframe of needing to report back by August 1 and was instructed to avoid “unnecessarily duplicating” Bergin’s work. But “The Fink” – as he is known in Melbourne legal circles – is diving deeply into the same thorny issues of money laundering and criminal infiltration that prompted NSW to suspend Crown’s licence.

Requests from the two royal commissions for thousands of documents have sent Crown’s law firm Allens and a raft of advisers into overdrive, which one person familiar with the work saying it is a “logistical nightmare”.

“It’s putting everyone under a massive amount of pressure,” the legal source says. “The financial services royal commission wasn’t just about one bank.”

There is a risk the royal commissions will uncover evidence of wrongdoing that Bergin did not find in her probe. Finkelstein has said the “most important” area of his inquiry is one Bergin didn’t touch at all: how Crown deals address gambling addiction – something critics have long said Crown has failed to do properly.

“They’re the biggest gambling harm production factory in the country,” says Charles Livingstone, a gambling academic at Monash University. “On a systematic basis people are being encouraged to gamble way beyond their means at levels which are quite unimaginable to ordinary people, and Crown is being rewarded to do it.”

Crown Melbourne has a licence to run up to 2628 poker machines, 24 hours a day, which sucked up $462 million of gamblers’ losses in 2019. Crown won $441 million from high-rollers that year and close to $772 million on its main-floor table games.

Livingstone says Crown’s loyalty program – which rewards patrons with free tickets to sports events and other hospitality the more they spend – was one way it encouraged people to gamble excessively, and that staff fail to intervene when people sit at poker machines spending too much, for too long.

The Victorian inquiry is set to examine the Victorian Commission for Gambling and Liquor Regulation’s oversight of Crown in its first week of hearings, including how it investigated the arrest of 19 Crown staff in China in 2016, and will then move onto Crown’s now terminated “junket” partnerships. It has only called on Crown witness to give evidence so far: Nick Stokes, its head of financial crimes.

A Crown spokeswoman declined to comment “out of respect for the Victorian Royal Commission and its processes”.

The commission has been collecting evidence from gambling addicts who have been harmed at Crown as well as whistleblowers, according to people familiar with preparations for the inquiry.

There are a string of recent public scandals to examine too, including Crown blanking out buttons on a small number of its poker machines so punters could only place minimum and maximum bets; and giving gamblers Crown-branded plastic picks to jam down buttons and let their pokies spin continuously.

The West Australian royal commission’s first week has focused on the state’s gambling watchdog, which is under pressure over how it let money laundering take place at Crown Perth.

Getting through these inquiries is only complicated by the takeover bids for the group.

US private equity group Blackstone – which already owns 10 per cent of the Crown – kicked off the race in March when it lobbed a full takeover bid at $11.85 per share, which over the weekend it increased to $12.35, valuing the company at $8.3 billion.

Despite the multiple offers, sources familiar with Blackstone’s bid say Crown’s board has not engaged with the US firm in any substantive way, even as the rising Crown share price ($13 on Friday) suggests investors are banking on a deal.

Blackstone was becoming impatient with the lack of engagement, and the fact Crown has disclosed limited details about both its bid and a rival proposal from US fund Oaktree to fund a $3 billion buyout of James Packer shares, according to one source.

“It’s coming up to two months now and the market is still trading above the indicative bid price – so it’s fair to say they expect something to happen – but Blackstone is sitting there without engagement,” says the experienced dealmaker.

There are some who wonder if the Crown board – which lost most of its mergers and acquisitions corporate experience when five directors resigned after Bergin’s final report – can deal with both the corporate interest and regulatory scrutiny at once.

“Is this inexperience, is it some sort of agenda? It doesn’t paint corporate Australia in a good light that they can let this drift on,” says one shareholder.

But despite the push for action, Coonan and her board, who are being advised on the takeover offers by bankers at UBS, aren’t letting suitors distract from what they see as the main game.

“Helen’s laser focus is on the reforms and suitability, and that seems to be bearing fruit,” one person close to the board said.

A merger of Crown and The Star would create the seventh biggest casino group in the world, with about 30,000 employees (more than Qantas), and seven resorts and casinos in Sydney, Melbourne, Brisbane, Perth and the Gold Coast.

The Star says the combined $12 billion group could tap into new overseas tourist markets as the travel industry recovers from the COVID-19 pandemic, and be a quicker fix for Crown’s regulatory woes, given The Star’s long history running casinos in Sydney and Queensland.

But the proposed super-monopoly will face a tough test from the Australia Competition and Consumer Commission.

“If you think having a monopoly in Victoria is bad enough, think of one where the incumbent is twice as large,” says leading casino industry consultant Ben Lee. “There’d be no way for the government to broach the prospect of deregulating that segment of the economy.”

Crown Sydney was originally pitched as a high-roller, VIP-only casino when it was handed the licence to the city’s second casino in 2013, but Lee says that is no longer a longer viable business plan. Crown’s ability to attract ultra-wealthy Chinese gamblers was dealt a massive blow when police arrested 19 of its staff there on gambling crimes in 2016, and its back-up plan – “junket” tour operators – has been obliterated by the Bergin inquiry.

“So with the VIP market more or less gone for Crown, they will go after Star’s main-hall customers,” says Lee. “Star is desperate to avoid a well-funded and potentially well-managed competitor coming online, and this represents the best opportunity for them to head off a competitor”.

There is a growing view Blackstone and The Star will end up working together, with the former owning the properties and the later running the casinos. Blackstone has been involved in this type of arrangement in Las Vegas.

Whatever happens to Crown’s licences in three states, the man with the most influence over its future is still major shareholder James Packer, whose 37 per cent holding will likely swing a sale or a merger. The reclusive billionaire has been looking at ways to sell out of Crown – the major vehicle for his wealth –for several years.

Packer agreed to sell to Las Vegas giant Wynn Resorts in April 2019 in a 50-50 cash and scrip deal worth $14.75 a share, which was torpedoed by a press leak. He sold 10 per cent of Crown to Hong Kong’s Melco Resorts for $13 a share a month later. Undone by probity concerns, Melco on-sold its stake to Blackstone for just $8.90 a share (shares traded at $13 on Friday, which means Blackstone has still played a winning hand even if it folds in the bidding contest for Crown).

The one-time executive chairman has agreed to step back from running Crown after the Bergin inquiry found his outsized influence contributed to its corporate dysfunction, with “disastrous consequences”.

But even from outside the tent he will be a key player in any sale process, with his private company Consolidated Press Holding appointing the well-regarded dealmaker Chris Wyke, from Moelis Australia, to assess and negotiate offers.

The irony of The Star now pursing Crown and potentially giving Packer an exit is not lost on Ben Lee.

Kerry Packer famously missed out on the original tender to build a casino at Sydney’s Pyrmont when his bid – handled by the then 26-year-old son James – fell short. In 2012 James sparked a bitter corporate stoush when Crown stormed onto The Star (then called Echo Entertainment) share register in an attempt to split its NSW licence and create his new casino at Barangaroo.

“The Star offer would be a rather bitter pill for Jamie Packer,” Lee says.

Catch all the day’s headlines

At the end of each day, we’ll send you the most important breaking news headlines, evening entertainment ideas and a long read to enjoy.  Sign up to The Sydney Morning Herald’s newsletter here, The Age’s here, Brisbane Times’ here, and WAtoday’s here.