WASHINGTON — Amid a pandemic and with the 2020 presidential election looming, the White House and the Centers for Disease for Control and Prevention have mailed Americans a coronavirus advisory that features Donald Trump’s name in the title.

The oversized postcard, dated March 16, is headlined “PRESIDENT TRUMP’S CORONAVIRUS GUIDELINES FOR AMERICA” in all capital letters and displays the logos of the CDCs and the White House. On the back are the recommendations unveiled 10 ago that Vice President Mike Pence frequently refers to during White House briefings.

The card that Pence holds up, though, is titled “15 Days to Slow the Spread” and does not feature Trump’s name. 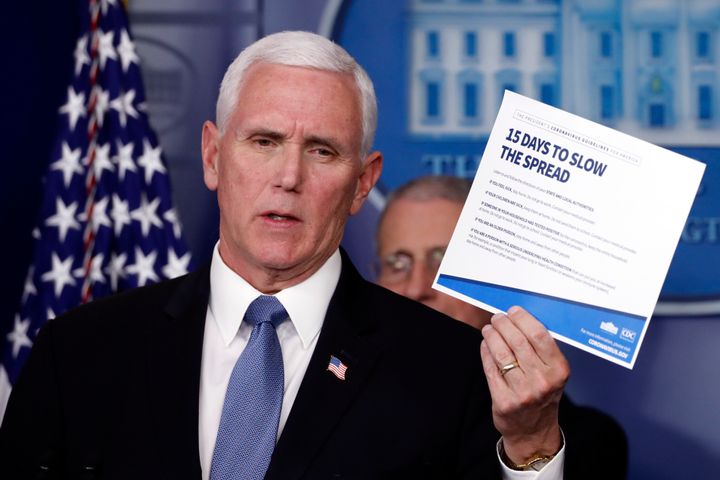 “This is another outrageous example of Trump using the levers of the executive branch to promote himself and his own interests, rather than act in the best interest of public health,” said Michael Carome, a medical doctor and head of the Health Research Group at the liberal advocacy organization Public Citizen.

The front of the postcard also provides the website “coronavirus.gov,” which offers the standard advice about washing hands frequently, staying home if sick, not eating out at restaurants and not visiting the elderly, especially in nursing homes. That same information is on the back of the mass-mailed postcard, with no further mention of Trump. 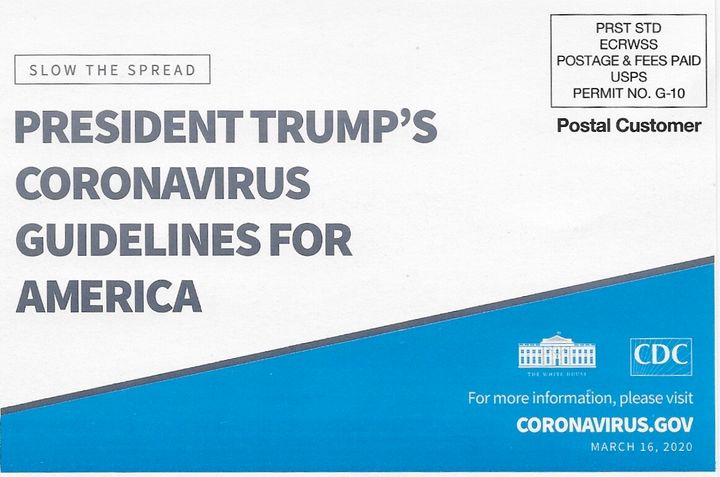 It’s unclear who decided to feature Trump’s name so prominently on the mailer — the headline is larger than anything else on the card ― particularly since the president recently said he did not really support those recommendations, and only went along with them because he was afraid of being criticized if he did not.

“I don’t think if I would have not done it — we would have been unbelievably criticized for not doing it,” he told Fox News in a Rose Garden interview earlier this week.

Neither the CDC nor White House press secretary Stephanie Grisham responded to HuffPost’s queries about the mailing.

Trump is deeply unpopular with a significant percentage of the U.S. population, raising the possibility that many Americans will ignore the flyer simply because they associate it with him.

“I worked in the Obama administration, and it is literally impossible for me to imagine ever having even contemplated sending out a flyer or document like this,” said Rachel Cohen, now a spokesperson for Virginia Democratic Sen. Mark Warner. “In addition to being gratuitous and an extremely distasteful use of official resources at a time when thousands of Americans are being hospitalized and even dying, there would have been broad awareness and concern that branding it with the president’s name would cause millions of Americans to reject or ignore its advice.”

It’s unclear if the mailing went to every U.S. delivery address or to some smaller set of them. But at least some residents in California, Pennsylvania, Florida, Colorado, New Jersey, Washington state and Washington, D.C., have received them in the past two days.

Trump has a long history of using White House “official” events — those paid for entirely using taxpayer money — to attack Democrats and boost his reelection campaign.

Previous presidents were careful not to bring partisan politics into activities that are, by their nature, supposed to speak to all Americans, and not just to their supporters. Trump, however, has not appeared to care about that distinction.

During a Dec. 26, 2018, visit to U.S. troops in Iraq, Trump claimed that Democrats did not support them: “We were fought very hard by the Democrats and others. But I said, ‘We have to take care of our military.’”

Nine months later, at an Aug. 13, 2019, appearance to tout shale oil production in Monaca, Pennsylvania, Trump attacked Democrats running against him and promised he would beat them. “I don’t know who’s going to win, but we’ll have to hit Pocahontas very hard again if she does win. But she’s staging a little bit of a comeback. What a group: Pocahontas and Sleepy Joe,” he said, referring to Massachusetts Sen. Elizabeth Warren and former Vice President Joe Biden. “I don’t think they give a damn about western Pennsylvania, do you?

And earlier this month, during a visit to the CDC in Atlanta, Trump wore a campaign hat emblazoned with his reelection slogan as he toured the facility and later took questions from reporters.

At that visit, Trump said he preferred leaving some coronavirus-infected passengers aboard a cruise ship rather than bring them ashore because he did not want those people to count in the total U.S. coronavirus statistics. He also claimed, falsely, that anyone in America who wanted to get a coronavirus test could do so — which is not true even today, nearly three weeks later.

“Since the early stages of the coronavirus pandemic, President Donald Trump has spewed an endless stream of misleading, overly optimistic, self-congratulatory and often incoherent statements about the disease and his administration’s response to it,” Carome said. “As a result, he has no credibility with the public, and most Americans don’t believe anything he says. By having his name prominently attached to this CDC flyer, many Americans are likely to disregard the important and sound advice being provided.”