MANCHESTER, N.H. – Republican Rep. Liz Cheney of Wyoming says that many fellow Republicans are “privately” thanking her for standing up to former President Donald Trump as she runs for reelection in 2022.

Cheney, one of the most well-known and vocal members of a small group of GOP lawmakers and leaders opposed to the former president, is one of only two Republicans serving on a special committee organized by House Democrats to investigate Trump’s role in inciting the deadly Jan. 6 insurrection at the Capitol by right-wing extremists.

“It’s a real reflection of the times in which we live that privately and behind the scenes, there are many Republicans who say, ‘Thank you for what you’re doing. We wish we could be more public,’” Cheney told Fox News on Tuesday. “People who understand that what the former president is saying is dangerous, is not true, and who know that our party’s got to be a party based on truth, that we can’t embrace the lie.”

“My hope is that going forward, it will become clear that that is where the party is, that we’re looking towards the future. But we really have to reject what the former president is doing and what he continues to attempt to do,” the three-term representative said during an interview in New Hampshire.

Trump was a past featured speaker at the event. His headlining of the gala in the autumn of 2014 was one of his first trips to New Hampshire as he began exploring a potential run for the 2016 GOP presidential nomination.

Trump, defeated by now-President Biden in the 2020 election, has repeatedly flirted with making another presidential run since leaving the White House. And Cheney, in April, didn’t close any doors to a potential 2024 White House run of her own.

Asked about the next presidential race, Cheney told Fox News: “I think 2024 is going to be just absolutely critical for the future of the country. I think we’ve seen a whole array of really bad policies from the Biden administration. We’ve seen a real lurch to the left, which is dangerous for the country on economics, on national security policy.”

The GOP has “got to get back to a place where we can provide voters an alternative,” she said. “An alternative that’s based on truth, based on substance, where we’re able to say to the American people, ‘This is what we believe as Republicans, and this is why you ought to trust us. We’re competent, we’re serious and we believe in conservative principles.’ So I think that ’24 is going to be really important no matter who’s running, and I think it’s going to be very important to make sure that it’s not Donald Trump.”

Cheney, the daughter of former Vice President Dick Cheney, was the most senior of the 10 House Republicans who voted to impeach Trump on a charge of inciting the attack on the Capitol. Cheney immediately came under verbal attack by Trump and his allies, but in February she easily crushed an effort by Trump loyalists in the House to dump her from her leadership position as House Republican Conference chair.

In May, she was ousted from her No. 3 House GOP leadership position. 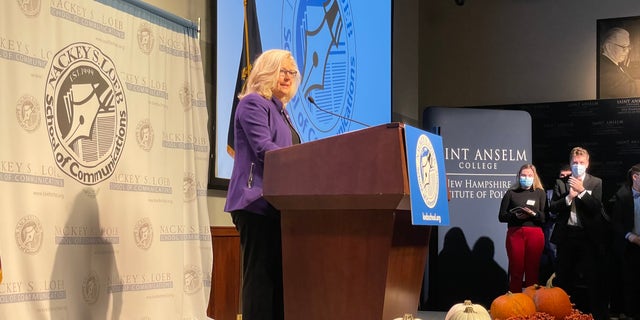 Stepping up his efforts to oust Cheney, Trump in September backed one of the candidates hoping to defeat Wyoming’s at-large House member in next year’s election. The former president endorsed lawyer and former gubernatorial candidate Harriet Hageman, writing in a release put out by his political action committee that “Harriet is all in for America First.”

After Trump pilloried Cheney as “the Democrats’ number one provider of soundbites,” she fired back on Twitter, writing, “Here’s a sound bite for you: Bring it.”

After making his endorsement, Trump and his allies successfully urged some, but not all, of the other anti-Cheney candidates to drop out of the primary and coalesce around Hageman.

In her speech, Cheney emphasized that “political leaders who sit silent in the face of these false and dangerous claims are aiding the former president, who’s at war with the rule of law and the Constitution.”