Online bookseller Booktopia has smashed analyst expectations just months after its debut on the ASX after reporting record sales over the key Christmas period.

In a trading update on Wednesday, Booktopia revealed its revenue for the first half of the financial year rose 52 per cent to $113 million, fuelled by the company’s strongest-ever sales through December, with nearly 730,000 books sold. 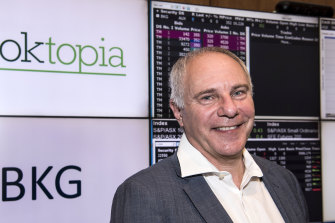 Earnings also skyrocketed, jumping over 500 per cent to $8 million for the half. Shares in the e-commerce player rose as much as 15 per cent, before closing up 9 per cent at $2.90, as investors responded positively to the news.

Booktopia listed on the ASX in early December, following a swathe of other online retailers hitting the boards late last year such as Adore Beauty, Universal Store and MyDeal.

At the time, the company forecast 2021 revenue of $204.5 million and earnings of $9.4 million, however, Wednesday’s trading update blew expectations out of the water, with Shaw and Partners’ Jonathon Higgins saying the business’ margins were currently tracking two years ahead of his forecasts.

“We remain bullish on Booktopia, with the latest set of numbers showing its ability to perform in an Australian market which has experienced a material rebound from Covid lockdowns,” he said.

“Overall the results are materially ahead of Shaw and indicative of a deeper market and better margins than the market is expecting.”

Mr Higgins said the better-than-expected result was likely due to improved cost benefits arising from the retailer’s ongoing $20 million automation and expansion of its distribution centre, along with a broader trend towards online shopping in wake of the COVID-19 pandemic.

Multiple online retailers have experiences surging sales in recent months, with major players such as Kogan, Temple and Webster and Redbubble all reporting huge spikes in revenue.

Chief executive Tony Nash told The Age and The Sydney Morning Herald while this growth had been accelerated due to the pandemic, he did not think the rush to online was temporary.

“It’s not a flash in the pan, the pandemic has shot us down the track, it’s pushed us forward a few years,” he said. “And that’s a good thing for all retailers, not just pure plays like us.”

Mr Nash said the demand from customers during the pandemic had been so great Booktopia had been forced at times to turn off its marketing, lest the business be overwhelmed with orders from customers.

“If we had kept everything on as normal, we would have completely stagnated because we would have been getting just too many orders,” he said. “It’s a travesty to run out of stock when your customers are there to buy it.”

Shares in the retailer had eased to be up 9 per cent at $2.89 just before market close. Booktopia releases its half year results on February 22.