Clyburn claims Trump not conceding yet means 'this democracy is teetering'

"Trump should concede, but I think the Republican Party has a responsibility here," Clyburn told CNN's "State of the Union." "This country is bigger than any one person. This democracy is teetering. … We are in a very dire set of consequences here, and we had better get hold of ourselves and this country and stop catering to whims of one person."

CLYBURN SAYS 'VOTER SUPPRESSION' IS ONLY WAY BIDEN CAN LOSE, CLAIMS TO HAVE HAD 'COMPLAINTS ALL DAY'

Clyburn seemed to allege that Trump is a puppet of Russian President Vladimir Putin.

"We have been the envy of the world, but we have also received a lot of disdain from places around the world," Clyburn said. "So I don't understand how the Republicans can allow Putin to dictate the fortunes of this country and that is what is going on here." 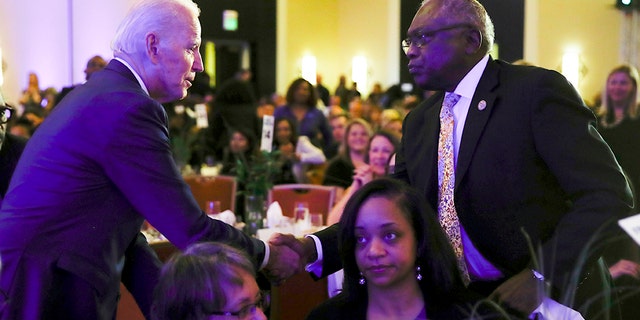 Clyburn's endorsement of Democratic President-elect Joe Biden in February boosted his support among Black voters during the Democratic primary.

"Joe Biden was our best bet," Clyburn said on Sunday. "He was the best bet to go into the general election because incumbency is what it is and it's a real force when you can master the levels of government all across the country. You can really get things done that sometimes cannot be seen with the naked eye."

Clyburn also discussed Democrats' performing below expectations in House races and the seeming divide between swing district Democrats and their progressive counterparts about slogans like "Defund the police."

"John [Lewis] and I sat on the House floor and talked about that defund police slogan, and both of us concluded that it had the possibilities of doing to the Black Lives Matter movement and current movements across the country what 'Burn, baby, burn' did to us in the 1960s," Clyburn said.

"I feel very strongly, we can't pick up these things just because it makes a good headline. It sometimes destroys headway – we need to work on what makes headway rather than what makes headlines," he continued.