Drinks giant Coca-Cola Amatil is locked in a fight with mining behemoth Glencore over lucrative coal royalties from a site in Queensland in a dispute that could be worth tens or hundreds of millions of dollars.

In a case before the Supreme Court of Queensland on Monday, Glencore, majority owner of the Rolleston coal mine, is up against the Queensland government in a tussle that has inadvertently revealed Coca-Cola Amatil’s coal assets at the central Queensland site. 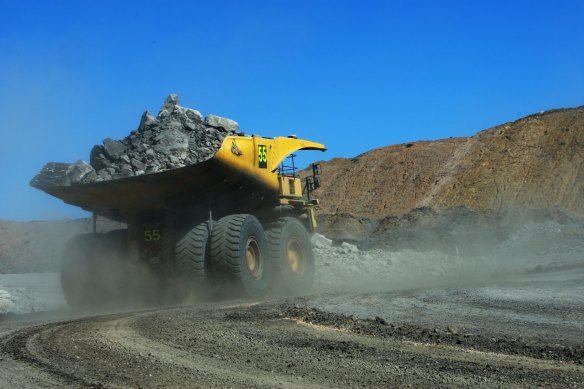 Until the dispute surfaced, the Rolleston owners were paying royalties to a Coca-Cola Amatil subsidiary.

The case originated in 2019 with a legal dispute in which Rolleston’s owners argued that the Queensland government did not own coal rights for the part of the mine site from which it was receiving royalties, and the state had been mistakenly paid $54.2 million. Glencore and the other owners were seeking repayment.

In May 2020, the state responded, claiming it owned the coal rights to another part of the mine: Lot 18.

Rolleston’s owners had been paying coal royalties to Coca-Cola Amatil’s Associated Products and Distribution Pty Ltd (APD) on the basis that it owned the mineral rights to this parcel of land, Lot 18.

Rolleston’s owners launched legal action against APD in July 2020 seeking repayment of $80.6 million in royalties which had been paid since coal mining commenced at the site in 2009. They said these royalties were now being claimed by the state of Queensland.

“The plaintiffs are entitled to repayment of the Lot 18 royalties paid to APD by mistake, in the sum of $80.58 million,” the plaintiffs said in their statement of claim.

Coca-Cola Amatil told the ASX in 2020 that $80 million worth of royalties had been received since 2014 and it had been recorded as “other revenue”.

According to reports, Coca-Cola European Partners, which acquired Coca-Cola Amatil for $7.7 billion last year, has been looking for a buyer of the coal asset, which the company has now confirmed.

“The ownership of these property rights is not part of CCEP’s core business and remains under review to ensure alignment with our long-term business strategy,” said the spokeswoman.

With coal prices hitting record highs above $400 a tonne recently, the stakes are higher than ever.

According to the court documents, APD receives royalties starting at 7 per cent of the sales price of the coal sold if it is below $100 a tonne. The royalty peaks at 10 per cent of the sales price for any amount above $225 a tonne. Rolleston Coal Holdings, the mine operator, paid out $68 million in royalties in the 2021 calendar year alone, some of which would have been earmarked for APD.

“Amatil intends to defend APD’s rights to all royalty income, past and future,” Coca-Cola Amatil said in a statement to the ASX in 2020 when the dispute first surfaced.

Parties to the dispute were not commenting ahead of the court case.

“The matter of the royalties is currently before the court in Queensland, and as such, we are unable to make any further comments about the case,” said a spokeswoman for Coca-Cola Amatil.

The coal assets date back to CCL’s corporate legacy as a conglomerate with many business interests, including tobacco.

Coca-Cola Amatil was set up under the name British Tobacco Company (Australia) in 1904 as the local arm of what is now the £77 billion ($136 billion) British American Tobacco plc.

Coca-Cola Amatil says the coal rights date to the 1980s when the group, then known as Amatil, operated five businesses: tobacco, beverages, snack foods, poultry, as well as communications and packaging.

“This land included the rights to minerals beneath the surface including coal. While the surface land was sold in the late 1980s, Amatil’s subsidiary, APD, retained the sub-surface strat and associated mineral rights.”

In 1989, Amatil announced plans to sell its tobacco interests to major shareholder BAT Industries – a subsidiary of the British tobacco giant which had been a controlling shareholder since Amatil’s inception.

US soft drinks giant Coca-Cola acquired a 40 per cent shareholding in the group that would focus on its beverage interests including the Coke brand.