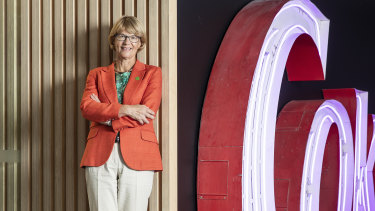 Sales also rose at fast food outlets such as McDonalds and Hungry Jacks. The company also singled out "customer wins in Pizza Hut, which switched to the Coca-Cola range in 2019 for the first time in its 40-year history in Australia".

Total revenue for the group from continuing operations came in at $5.07 billion, which was ahead of market consensus and 6.7 per cent up on the previous full year.

"This result demonstrates encouraging progress as we mark the completion of our two-year transition period," Ms Watkins said.

"In particular, the Australian Accelerated Growth Plan and Indonesia’s Accelerate to Transform Plan are delivering volume and route-to-market improvements in these major markets, with a return to volume and revenue growth in Australia and double-digit revenue and volume growth result in Indonesia & PNG," she said.

"This result supports our goal of delivering mid-single digit earnings per share growth in 2020 and over the medium term," she said.